MONTPELIER — The House on Thursday approved the latest version of the Global Warming Solutions Act, passing the measure by a 105-37 vote — a large enough margin to override a veto from the governor.

The thrust of the bill, H.688, is to impose carbon emission reduction goals that would be put into statute as mandates.

This version most recently passed through the House Energy and Technology Committee, which approved it by a 7-2 vote last week. 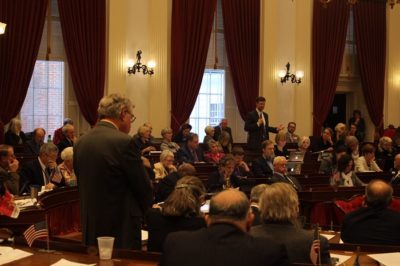 An amendment to monitor the cost on society for the implementation of carbon-reduction policies was approved by lawmakers. Proposed by Rep. Bob Bancroft, R-Westford, it requires that the Joint Fiscal Office “shall prepare, or hire a consultant to prepare, an analysis of the economic, budgetary, and fiscal impacts of the Plan.” The provision received almost unanimous support via a voice vote.

The legislation would create a climate council to set the strategy to reach these benchmarks, and its recommendations would then be passed on to the Agency of Natural Resources for rulemaking and implementation.

One of the most contentious portions of the bill is it would allow citizens to sue the state if the mandates are not met. Potentially, a court could order the state to take further carbon-mitigation actions.

Another two amendments proposed by Bancroft would have taken away the ability to sue when or if the reduction targets are missed; the House rejected them by a strong voice vote.

Rep. Anne Donahue, R-Northfield, proposed an amendment to ensure that any initiative to come out of the climate council must pass through the Legislature first. This measure was defeated in a roll call vote by about two-thirds, largely along party lines.

Rep. Tim Briglin, D-Thetford, who introduced the latest version to the House floor, got into what he sees as pending climate catastrophes if actions aren’t taken.

“We are experiencing increasingly severe and frequent weather events in our communities,” he said. “More episodes of heavy rain and flooding, more extreme heat, more exposure to tick-born illnesses. In the last decade, Vermont has experienced 18 federal designated disasters.”

During a break for caucuses, House Minority Leader Pattie McCoy, R-Poultney, urged her Republican colleagues not to get into debates over this narrative from the climate alarmists.

“I don’t want us to be pigeon-holed into that ‘we don’t agree with climate change,'” she said.

She did say the state of Vermont isn’t going to make any tangible difference in global weather events.

Rep. Robert LaClair, R-Barre Town, observed that emissions for Vermont lags by about three or four years. The latest official data for Vermont is currently from 2016. He points out this is going to make it difficult for policymakers to know if the emission-reduction benchmarks are being met.

“Is it reasonable to expect that the data that we are going to be using going forward to, one, build these plans and, two, to see that we’re adhering to the plan is always going to be two to three years old?” he asked.

Briglin confirmed this is going to be the case.

“I think it’s fair to say that the data is always going to be a couple of years behind,” he said.

Rep. James Harrison, R-Chittenden, asked about how much power is the Agency of Natural Resources is going to have when it comes to enforcing emission targets?

“Is there anything that ANR could rule in relation to taxes or fees? For example, could they institute a higher motor vehicle registration fee for a combustion engine for example?”

Briglin insists that such actions could not take place without legislative action.

“That was also a stone we turned over. … The short answer to that is no, ANR would not be able to impose a tax or a fee.”

In a recent commentary on the bill, Ethan Allen Insititute President Rob Roper expressed his desire to see the true cost implications.

“If there are political considerations that need to be taken into account, perhaps a prudent measure would be to replace the existing bill with a study examining what the rules and the costs of meeting these GHG goals would look like first, before the Legislature commits to make meeting them mandatory,” he wrote.