Speaking from a structurally deficient bridge over the Pemigewasset River in Woodstock, Biden said the massive spending bill will have a meaningful impact on Granite Staters from fixing potholed roads to ensuring clean drinking water. 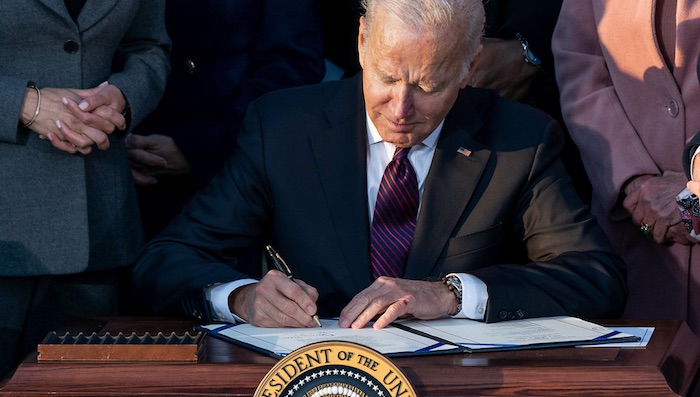 President Joe Biden signing the Infrastructure Investment and Jobs Act, Monday, November 15, 2021, on the South Lawn of the White House.

“Your life is going to change for the better,” the Democrat said in remarks broadcast by local TV stations. “This law is a blue-collar blueprint to rebuild America.”

Biden signed the bipartisan infrastructure bill on Monday during a White House ceremony, and has kicked off a nationwide tour to highlight aspects of the plan.

New Hampshire stands to get more than $2.05 billion from the spending bill over the next five years, including at least $1.1 billion for highway upgrades and $225 million for bridge repairs, according to a breakdown provided by the White House.

The 82-year-old Woodstock span bridge where Biden spoke on Tuesday has been on the state’s “red list” of structurally deficient bridges for nearly eight years.

“The state has spent more than a quarter-million dollars on Band-aid repairs to this bridge alone,” Biden said. “Right now, there are 250 bridges in your state deemed structurally unsafe.”

The Granite State will also receive at least $418 million to improve water and sewer infrastructure and at least $100 million to help provide broadband coverage. Another $45 million will be available to improve rail service.

Ahead of Biden’s visit, Republican Gov. Chris Sununu sent a letter to Biden with a laundry list of concerns about the infrastructure bill and the federal government’s COVID-19 vaccine mandates.

Sununu, who greeted Biden when he arrived at Manchester airport, pointed out that New Hampshire receives the lowest amount of money nationwide for highway programs under the federal government’s funding formula and called for a more equitable funding system. He asked Biden to ensure more flexibility in allocating the federal funds to states.

“How do you plan to address severe supply chain issues, chronic workforce shortages, and skyrocketing inflationary costs that will make these funds difficult to invest?” he asked.

The Biden administration is mounting a full-court press to promote the infrastructure plan and providing localized details on what the measure would do to improve rail service, drinking water, broadband internet access and crumbling highways.

Topping the list of infrastructure needs in New Hampshire are its aging roadways and bridges, many of which are in a state of disrepair, according to a fact sheet released by the White House.

The Biden administration’s Infrastructure Report Card gave the state a C- grade, saying there are 250 bridges and nearly 700 miles of highway in poor condition.

Biden will visit Michigan on Wednesday, where he is expected to tour a General Motors’ plant that makes electric vehicles. Vice President Kamala Harris heads to Ohio later this week. Biden’s Cabinet secretaries, including Transportation Secretary Pete Buttigieg, and other top administration officials are also peddling the plan.

Biden also hopes to use the infrastructure law to help boost his popularity, which has sagged in recent months amid rising inflation and a prolonged fight against COVID-19.

New Hampshire is also a key state in Democrats’ efforts to hold onto their majority in Congress in next year’s midterm elections.

Democrats will be defending a U.S. Senate seat and two congressional districts in New Hampshire next year.

New Hampshire Democrats welcomed Biden’s first visit to the state since the 2020 election, saying it highlights what the infrastructure plan will mean for the state.

“While our federal delegation worked across the aisle to get this bill to President Biden’s desk, New Hampshire Republicans have all criticized or flat out opposed this critical legislation that will bring much-needed investments in New Hampshire’s infrastructure,” Ray Buckley, chairman of the state’s Democratic Party, said in a statement.

Stephen Stepanek, chairman of the New Hampshire Republican Party, said he “welcomed” Biden’s visit but mockingly urged members of the state’s all-Democratic congressional delegation to get their photographs taken with the president during the trip to the state “to promote his socialist, trillion dollar plans.”

“It will be extremely helpful as we put together our mail and digital ads for next year,” Stepanek said in a statement. “Granite Staters just aren’t impressed with Joe Biden and his definition of leadership.”