Quinnipiac University released polling data that showed Biden’s approval rating at 33%. The support varied depending on political views, with 76% of Democrats approving but only 26% of Independents and 3% of Republicans approving of his work so far. 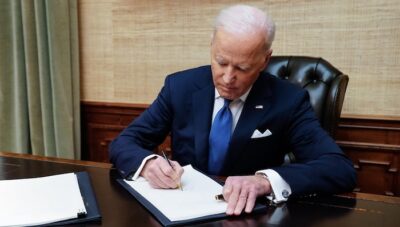 “Joe Biden’s recent job approval ratings, which are averaging 14 points lower than those early in his presidency, have declined far more among younger than older generations of Americans,” Gallup said.

Biden has said Russia’s invasion of Ukraine is to blame for gas prices. According to that poll, though, 41% of surveyed Americans blame Biden’s economic policies for gas prices while only 24% blame Russian President Vladimir Putin’s invasion and the related sanctions.

The most recent Quinnipiac poll also found that the majority of surveyed Americans, 74%, think the worst of the war in Ukraine is still to come.

“Thirty-nine percent of Americans approve of President Joe Biden’s handling of the response to Russia’s invasion of Ukraine, while 48 percent disapprove,” the poll said.

Gallup polling released Thursday featured slightly better approval numbers but showed that much of the erosion in Biden’s support has come among young people.

“Joe Biden’s recent job approval ratings, which are averaging 14 points lower than those early in his presidency, have declined far more among younger than older generations of Americans,” Gallup said. “In fact, Biden’s job approval has changed relatively little among baby boomers and not at all among traditionalists. As a result, older Americans are now more likely to approve of the president than younger Americans are.”

At the beginning of Biden’s presidency, Gallup surveys showed about 60% of Generation Z and Millennials supported Biden. That number dropped to about 40% approval by March of this year.

According to Gallup, the delayed rebound from COVID-19 and the chaotic and deadly withdrawal of U.S. troops from Afghanistan were major moments that shed support for the president.

Aside from younger voters, Biden has seen a major decline among Black and Hispanic voters.

“In addition to the 21-point decline in Biden job approval among Generation Z adults, and the slightly larger 23-point drop among 18- to 29-year-old adults, Black and Hispanic adults also show big drops,” Gallup said. “Early in Biden’s term, 87% of Non-Hispanic Black adults approved of the job he was doing. That fell to 74% in the summer of 2021 and is now at 67%, 20 points lower than in the early stages of his presidency. Among Hispanics, Biden’s job approval has slumped from 73% in early 2021 to 52% now, a 21-point fall.”