Young Americans are being crushed by student loan debt. Unfortunately, a new bailout proposal wouldn’t help them much in the long term.

On Monday, Sen. Bernie Sanders, I-Vt., and Rep. Ilhan Omar, D-Minn., introduced legislation to wipe out every dollar of student loan debt in the United States, eliminating it for roughly 45 million Americans. Additionally, the proposal would make public colleges and community colleges tuition-free.

In a press conference announcing the proposal, Sanders said, “The American people bailed out Wall Street. Now it is time for Wall Street to come to the aid of the middle-class people of this country.”

That’s not, however, what the bill would end up doing. Loan forgiveness will not be a bailout for the middle class, but rather for colleges and universities. 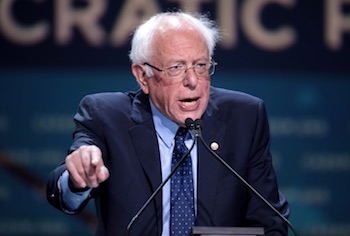 Contrary to the plan introduced by Sen. Elizabeth Warren, D-Mass., which would forgive up to $50,000 of student loan debt based on one’s income, Sen. Bernie Sanders’ proposal would eliminate all student debt regardless of one’s level of need.

The reason schools keep raising their tuition is that students have easy access to federal student loans, and the government has a near-monopoly on the sector. Colleges know they can keep raising tuition without fear of losing students because federal loans serve as a guaranteed subsidy.

Thus, the cost of college has skyrocketed and students find themselves deeper in debt.

The solution is not to pay off existing student debt, but to dramatically reduce the federal subsidies pouring into higher education and restore the private market’s role in providing student loans.

This would put long-needed pressure on colleges to keep their costs in check, since students would no longer have unlimited, guaranteed funds from the government. This, in turn, would insulate taxpayers from having to cover loan defaults and forgiveness.

The Sanders proposal goes in the exact opposite direction.

Contrary to the plan introduced by Sen. Elizabeth Warren, D-Mass., which would forgive up to $50,000 of student loan debt based on one’s income, Sanders’ proposal would eliminate all student debt regardless of one’s level of need. A barista at Starbucks would get the same deal as a Donald Trump Jr.

Both plans would certainly increase federal subsidies for higher education, thus ignoring the root cause driving much of the $1.5 trillion student debt crisis.

The Sanders bailout plan would be financed through a tax on Wall Street trading, which he claims would generate $2.2 trillion over the next 10 years. This includes a massive 0.5% tax on stock transactions and a 0.1% tax on bonds.

The Heritage Foundation’s Adam Michel has warned that such taxes would hurt the economy:

It would increase rather than decrease market volatility; it would hurt digital traders, who benefit the market; it would not raise as much revenue as projected; and the tax would ultimately be paid by American savers through lower investment returns and fewer economic opportunities.

Ultimately, the negative impact on the economy imposed by such taxes would far outweigh any perceived benefits.

At a time when Americans are more frustrated than ever with the education colleges are providing for the price, policymakers should be discussing ways to hold colleges accountable, rather than rewarding them with a blank check.

The best way to lower tuition and encourage colleges to provide a high-quality education would be to eliminate, or dramatically cap, federal lending.

Tightening the purse strings would make space for alternatives, such as private lending or income share agreements. This would not only lower costs, but prevent students from taking on unmanageable debt with no realistic plan to pay it back.

Policymakers should be looking at ways to reform the broken system and reshape its flawed incentive structure, rather than entrenching the status quo with more subsidies.

Free college and loan forgiveness sounds like an attractive offer on the surface. But damaging the economy, bailing out colleges that will only jack up tuition more, and weakening the quality of higher education in the process is a bad deal for every American.