New legislation from Democrats in the U.S. Senate would provide free public education to millions of Americans, but experts say the “free” plan comes with a hefty price tag.

Sen. Bernie Sanders, I-Vt., and Rep. Pramila Jayapal, D-Wash., introduced the “College for All Act” Wednesday, a legislative measure that would provide free college tuition for many Americans. Sanders claims he can fund the program through a tax on Wall Street, but critics say otherwise.

“In the wealthiest country in the history of the world, a higher education should be a right for all, not a privilege for the few,” Sanders said. “If we are going to have the kind of standard of living that the American people deserve, we need to have the best educated workforce in the world. It is absolutely unacceptable that hundreds of thousands of bright young Americans do not get a higher education each year, not because they are unqualified, but because their family does not have enough money. In the 21st century, a free public education system that goes from kindergarten through high school is no longer good enough.” 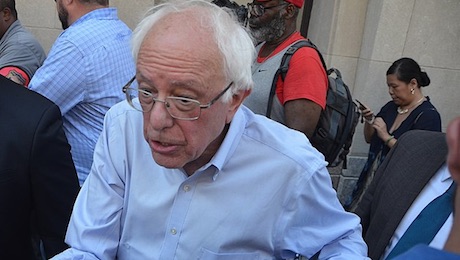 “The College for All Act will free students from a lifetime of debt, invest in working people, and transform higher education across America by making community college free for everyone and eliminating tuition and fees at public colleges and universities for families making up to $125,000,” Sanders said.

Such an ambitious social program raises the question: how will lawmakers pay for it? According to Sanders’ office, the plan would be funded by taxes on Wall Street, including “a tax of 0.5% on stock trades, a 0.1% fee on bonds, and a 0.005% fee on derivatives.”

The plan says that states will be asked to pay for a quarter of the bill while the federal government will fund the rest.

Critics argue that the tax would just be passed on to consumers and that Wall Street can outsmart the tax, reducing transactions and causing the revenue earned to fail to meet projections.

“Most countries that have implemented a financial transaction tax have found out the hard way that the tax did not raise anywhere near the amount its proponents claimed it would given the ease with which investors are able to move to different products or offshore trading venues,” Fred Tomczyk, former president and CEO of TD Ameritrade, wrote in a recent op-ed. “Sweden imposed a 1% financial transaction tax in 1984. Within six years of its implementation, 50% of Swedish stock trading volume had moved to other countries and the market dropped 5.3%. That’s what smart people do in efficient markets. Sweden abolished the tax in 1991, and share prices rebounded by 9.7%.”

Critics also argue that federal money has helped create the problem and that more will not fix it.

“Because federal loan money is handed out with little scrutiny as to the student’s ability to pay it back, colleges have had free rein to raise prices at rates often double the inflation rate,” said Kay C. James, president of the Heritage Foundation. “‘Free’ college tuition would only make things worse, creating an inflationary spiral: As more taxpayer dollars were funneled to schools with even less discretion than exists today, schools would keep raising costs.”

Sanders also called on President Joe Biden to cancel student debt via executive action. Biden said on the campaign trail he could get behind forgiving as much as $10,000 in debt per person, but he publicly asked the Department of Education earlier this month to prepare a memo on the legality of him forgiving as much as $50,000.

“The College for All Act will free students from a lifetime of debt, invest in working people, and transform higher education across America by making community college free for everyone and eliminating tuition and fees at public colleges and universities for families making up to $125,000,” Sanders said. “The time is long overdue to make public colleges and universities tuition-free and debt-free for working families.”

James argued that money has been spent to create bloated bureaucracies within schools instead of helping students.

Since the election, Biden has continued to receive pressure from Democrats who say he can bypass Congress and take executive action to cancel debt, despite warnings from Republicans and experts.

“You don’t need Congress,” Majority Leader Chuck Schumer, D-N.Y., said. “All you need is the flick of a pen.”