In an interview for the New York Times’ editorial board, Vermont independent Sen. Bernie Sanders spoke about a range of political issues affecting the U.S. The interview — which was released Monday — is part of the editorial board’s decision process for making an endorsement in the 2020 Democratic presidential primary. The board pressed the senator on a number of his positions — including immigration. 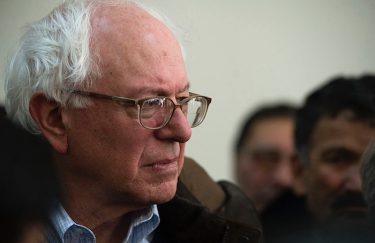 Sanders, when asked, reaffirmed his support for border decriminalization and his pledge to end all deportations — positions that immigration enforcement officials have said would lead to more illegal immigration. However, the board then reminded the senator that he once said illegal immigrants and guest worker programs lead to lower wages for low-skilled American workers.

“No, that’s what I said on the Lou Dobbs’ show 250 years ago, right?” Sanders answered. “It gets repeated a little bit. But look, I think if you look at the proposal that we have, and I speak as the son of an immigrant. What we are going to do — you asked me what we do in the first hundred days. I’ll tell you what we do on Day 1.”

The senator said, if elected president, he would give legal status to DACA recipients, attempt to pass “comprehensive immigration reform” and undo other Trump administration border policies. Sanders went on to say that he’s seen illegal immigrants get exploited by employers, and that he would work to end such exploitation.

“So, I think you’re raising an issue, though, that we don’t talk about a whole lot when we talk about immigration, and that is the exploitation of undocumented workers. If you don’t have any documentation, I could hire you for five bucks an hour and what recourse do you have?” Sanders said.

“But you don’t think that that exploitation results in lower wages for domestic workers?” Binyamin Appelbaum, a member of the NYT editorial board, then asked the senator.

The Vermont lawmaker answered in the affirmative.

“Sure it does. Right now, we have people who are being exploited. If you’re undocumented, and you’re being paid five bucks an hour, why am I going to pay her $12 an hour?” Sanders said.

This answer led to confusion between Sanders and the editorial board, with Appelbaum pointing out that the senator seemed to be reiterating his past position that the exploitation of illegal immigrant labor leads to lower wages for American workers.

Sanders clarified that he was speaking about how worker exploitation leads to lower wages for everyone, suggesting that the issue was much bigger than just taking advantage of illegal immigrant labor

With the exit of former HUD Secretary Julian Castro earlier this month, Sanders is left as perhaps the most progressive candidate among the 2020 Democratic candidates on the subject of immigration.

The self-described Democratic socialist released his immigration platform in November, pledging to not only end deportations and decriminalize illegal immigration, but also calling for the break up Immigration and Customs Enforcement and Customs and Border Patrol. He also wants to accept 50,000 “climate migrants,” provide sweeping amnesty to illegal aliens who’ve committed low-level crimes, and provide a pathway to citizenship for the county’s estimated 11 million illegal aliens.

However, before the onset of President Donald Trump’s administration, Sanders used to hold hawkish views of illegal immigration.

In a 2015 interview with Vox, Sanders referred to “open borders” as a “Koch brothers proposal,” adding that an open borders-level of immigration would lead to the erosion of the nation-state and “make everybody in America poorer.”

This had been a position he had held for many years. In a 2007 interview with then-CNN host Lou Hobbs, Sanders said the following: “I don’t know why we need millions of people to be coming into this country as guest workers who will work for lower wages than American workers and drive wages down even lower than they are now.”