Sanders’ commitment came during the Democratic presidential debate in Miami, Florida, as moderator Rachel Maddow asked how he will protect abortion access from the Supreme Court’s newly entrenched conservative majority.

“Let me make a promise here — you ask about litmus tests,” Sanders said. “My litmus test is I will never appoint any justice to the Supreme Court unless that justice is 100 percent clear he or she will defend Roe vs. Wade.” 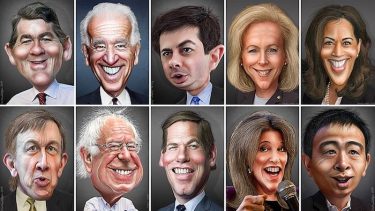 “I do not believe in packing the Court,” he added.

President Donald Trump’s judicial confirmation successes have prompted many Democratic presidential contenders to entertain structural reforms to the federal judiciary. Half of the Democratic presidential field has said they would consider expanding the Supreme Court to dilute conservative power on the bench. Others say they will consider less dramatic changes like term limits.

Speaking to The New York Times, Sanders noted that President Franklin Roosevelt advanced a plan to expand the Supreme Court after the conservative majority of his period struck down much of his domestic economic agenda as unconstitutional. That proposal elicited strong opposition from Congress, the public, and his own party.

“I am open to the idea of rotating judges out of the Supreme Court into courts of appeal to allow them to get a new look at the real world,” Sanders added in his remarks to the Times.

Other Democratic candidates have committed to a pro-abortion litmus test for their judicial nominees, including Sen. Kirsten Gillibrand of New York.

On guns, Sanders said assault weapons are “weapons from the military” that should not be legal to purchase.

Sanders was asked by MSNBC debate moderator Rachel Maddow if he still felt states should make decisions about gun regulations, implying that he had changed his position over his years.

“We have a gun crisis right now 40,000 people a year are getting killed,” Sanders said. “In 1988, when it wasn’t popular, I ran on a platform of banning assault weapons.”

“I believe what we need is comprehensive gun legislation that, among other things, provides universal background checks, we end the gun show loophole, we end the straw man provision,” Sanders continued.

“I believed in 1988 and I believe today that assault weapons are weapons from the military that should not be on the streets of America.”

“If the government wants to do that, then yes,” Sanders replied when pressed by Democratic California Rep. Eric Swalwell on how he planned to get rid of assault weapons.

Middle class will pay more in taxes under a Sanders administration

Sanders opened up the debate with a question on taxes, which he first answered by talking about Medicare. After his answer, the moderator asked him again to answer the question about taxes. He admitted that under his presidency, the middle class would pay more in taxes.

“Under that system, by the way, vast majority of the people in this country would be paying significantly less for health care than they are right now,” Sanders said at first. “I believe that education is the future for this country.”

When the moderator asked him to answer “the very direct question,” Sanders conceded.

“Yes, they will pay more in taxes and less in health care for what they get,” Sanders said Thursday night.

Sanders has run a campaign based on Democratic socialism, and has said that there would be “Medicare-for-all” for illegal immigrants.