IRASBURG, Vt. — An asphalt plant that went into operation last year has some residents concerned about potential health impacts, and the plant owner is working to address complaints while maintaining that the business is complying with environmental standards.

Local resident Mona Piette lives within a mile of J. Hutchins, Inc. Asphalt & Aggregates. She told True North that both she and her neighbors smell plant odors and are worried about potentially negative health consequences. 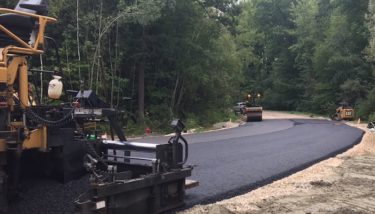 ECONOMY VS. ENVIRONMENT: There’s been a conflict in Irasburg between the owners of an asphalt plant and local residents.

“The wind in the summertime tends to come in from the south, so we get a lot of the fumes and at times it’s just unbearable,” Piette said. “It has seeped into our house and we’ve kind of been prisoners in our home, having to keep our windows closed most of the time.”

Plant manager Jeff Hutchins disputes that the fumes are a serious health hazard, and he says the company is taking measures to mitigate the smell.

“We have an Act 250 permit [that] took a couple of years to get,” he told True North in an interview. “We’ve been set up for a year, we’re in compliance, and we’re within our hours. The asphalt does have an odor to it; All over the world it has the same odor — when you drive down the road you can smell it.”

Hutchins says that he and his employees have visited properties dozens of times to verify and make attempts to control the smell. He said the town has also ordered air pollution experts to visit.

Still, some neighbors aren’t happy with where things stand.

“Their lives have been changed because the plant is there where it never was, and they would like it shut down,” Hutchins said. “They started with the smell, they’ve gone to hours of operation, they’ve gone to Act 250, and now they are trying to talk about safety as well. They are trying whatever avenue they can to gather up some support.”

Piette admits she wants the plant to move.

“We know it’s been a good thing for creating jobs for people but it’s a very poor location,” she said. “I can’t believe that a state and a town would let something like this go in so close to a residential area, and especially next to an elementary school.

“We were here first. We’ve been here 20 years and we worked so hard to acquire this land and then build our house on this beautiful property where we are.”

Kate Feuti, another resident of Irasburg, wrote a letter to the state regarding Act 250. She feels that Act 250 is meant to hold Vermont’s rural landscape to a higher standard.

“The original intent of Act 250 was to create a more aesthetic Vermont by protecting rivers, air, forest to allow the ability to support wildlife and preserve VT natural resources, forest conservation, and prevention of excessive clear-cutting,” she wrote in her letter.

The town’s Selectboard chair, Dave Lahar, says it’s hard to strike a balance between the rights of industrial companies and local residents.

“What this project illustrates is just truly how challenging it is to try to balance some of these issues in small-town Vermont communities — you know, trying to balance economic development with environmental issues,” he said.

Lahar said both sides have legitimate points, and he thinks both parties have acted responsibly so far.

“I know the families involved here [and] I hold them in the highest regard. I consider them salt-of-the-earth people, and if they say they are smelling fumes, I believe they are,” he said.  ” …  From my impressions, I would say he [Hutchins] appears to be very responsive, and he would like I think very much to resolve this.”

The company and local residents have met, and Lahar says more meetings are expected to try to find solutions. He added that the plant has an important economic role in town that needs to be considered.

“The other side of the balance here is, it’s a business that employs quite a few people, both directly and indirectly, and these are jobs in a community that, from my perspective … [are] important,” he said.

J. Hutchins, Inc. Asphalt & Aggregates employs between 14 and 18 well-paid workers at the plant, and about 40 to 50 people indirectly in the Northeast Kingdom.

Piette says dust from the plant is another issue for local residents.

“The other thing, also, they blast rock all the time,” she said. “We have pictures neighbors have taken when they are blasting, and there’s this giant cloud of like silica dust heading towards this way.”

Hutchins admits there is dust, but says it’s not getting to neighbors.

“There’s an element of dust all the time in that type of an application,” he said. He added that they use water spraying and new technologies to keep the air quality satisfactory. Furthermore, the Mining Safety and Health Administration tests the air coming from the plant.

“We always come way under those thresholds,” Hutchins said.