Despite the rising death toll, the U.S. continues to see encouraging signs that stay-at-home orders and social distancing requirements are working to slow the spread of COVID-19, federal health officials said Wednesday.

More than 14,600 Americans have died of the novel coronavirus, a number that President Donald Trump and other members of the White House Coronavirus Task Force acknowledged Wednesday is sobering. 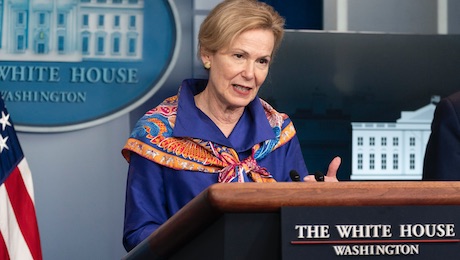 But there’s new evidence in California, Washington and other states that new cases are leveling off and even declining, White House coronavirus response coordinator Dr. Deborah Birx said.

“We are doing much better, in many cases, than several other countries, and we’re trying to understand that,” Birx said at Wednesday’s press briefing. “We believe that our health care delivery system in the United States is quite extraordinary.”

As new data comes in, the models that health officials are using have dropped the estimated number of potential U.S. deaths to 61,000, she said.

“That is modeled on what America is doing,” Birx said. “That’s what’s happening. And I think what has been so remarkable … is how important behavioral change is and how amazing Americans are in adapting to following through on the behavioral changes.”

Continued vigilance to stay-at-home restrictions, social distancing, hand-washing and other guidelines will continue to slow the spread of the disease and lower the death count.

“We are still in awe of the American people’s strength in this and following through,” Birx said.

Dr. Anthony Fauci, director of the National Institute for Allergy and Infectious Diseases, said Americans need to continue to follow the guidelines to continue slowing the virus’ spread.

“We need to keep mitigating,” Fauci said, referring to prevention practices such as social distancing, washing your hands for at least 20 minutes several times a day, and staying at home. “We know that mitigation works.”

On when the country can reopen, Trump said he thought it was sooner rather later.

“I think we can say that we have to be on the downside of that slope and heading in a very strong direction that this thing is gone,” Trump said. “We can do it in phases, we can go to some areas” that aren’t seeing as much of a spread of the disease.

He said the country is “ahead of schedule” in its fight against the virus.

“I hate to say it too loudly because all of a sudden things don’t happen,” Trump said. “But I think we will be sooner rather than later.”

But he also said he wouldn’t act to reopen the country without the advice of health experts.