At the governor’s weekly press conference Tuesday, Vermont’s high COVID case counts continued to dominate discussion, and the state’s aggressive COVID testing could be one reason for the spike.

Throughout the briefing, officials from the Scott administration noted that case counts go up or down based on increases and decreases in testing.

“Vermont’s cases have increased — we did see an increase following the Thanksgiving holiday after a somewhat artificial decrease in cases with lower testing,” Agency of Human Services Secretary Mike Smith said.

On Sunday, the Vermont Department of Health reported a record 641 cases of COVID-19. The prior high was 635 cases recorded on Dec. 1. Saturday saw 561 cases, but notably Vermont had only 246 cases on Monday, because the state conducts fewer tests on weekends.

The Health Department’s Vermont COVID-19 Data Summary report for the dates of March 5, 2020 through Nov. 3, 2021 show correlation between number of tests and seasonal virus spikes in fall and winter months.

The gray lines on this chart from page 7 show the daily number of tests conducted throughout the year. Those lines spike to between 8,000 and 15,000 tests in fall and winter, when the state’s COVID cases have also been highest. Testing frequency drops significantly in summer, and lower virus case counts get recorded. 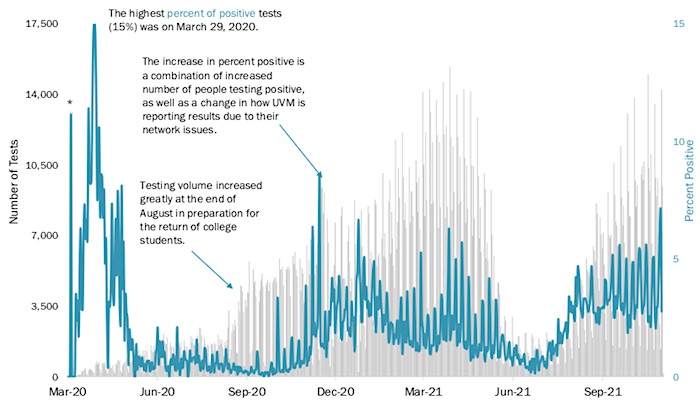 As the graphic also shows, the percentage of tests that come back positive stays consistently around 2 percent to 3 percent, with occasional spikes above 5 percent.

Gov. Phil Scott said Vermonters could be paid by the federal government to get more COVID testing.

“You might have seen that President Biden is working to allow Americans to be reimbursed for at-home tests in the new year,” he said.

The Department of Financial Regulation has issued an emergency rule on Tuesday requiring that commercial insurers cover take-home COVID tests, Scott added, noting that Biden’s approach to the pandemic has influence on Vermont policy.

“[The President] also discussed the importance of making testing widely available, which we’ll focus on here in Vermont,” Scott said.

Scott said the Omicron variant was seemingly “less severe” according to data from the Centers and Disease Control and Prevention.

He also took a moment to memorialize Pearl Harbor Remembrance Day, as Japan’s attack on the U.S. on Dec. 7, 1941, changed history and brought the United States into World War II.

Images courtesy of Public domain and Vermont Department of Health

9 thoughts on “As testing increases, so do COVID cases reported, officials say at press briefing”