Editor’s note: The town of Windham, New Hampshire, is presently conducting an audit of its Nov. 3, 2020 election, in which a hand recount one week later revealed that four Republican candidates each gained about 300 votes not counted on Election Night. Vermont uses the same Diebold AccuVote-OS vote tabulators owned by Dominion and managed by LHS Associates, of Salem, N.H. The following article by Alvin see has been republished with permission from GraniteGrok.

It may be that the AccuVote machines can sometimes mistake a fold in a ballot as a bonafide vote for the candidate whose name, and the associated oval, happens to be on a fold on that ballot.

For those voters using an absentee ballot, the ballot is folded to put in an envelope for mailing. One of the things that the Windham Audit is taking note of is ballots that had been folded on or near a candidate’s name. This may be the reason for the original vote discrepancy. 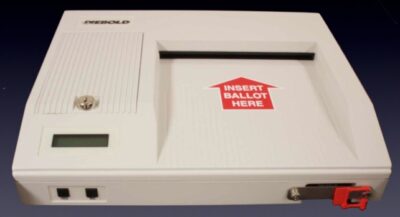 If there were about 400 misreads on the machines, consisting of about 300 overvotes killing as many valid votes for mostly Republicans, and about 100 invalid votes added to St. Laurent, the Windham discrepancy can be explained.

For an office with a single winner, such as for governor, the candidate names are on the same line. If there is a fold on that line, and the machine reads your vote and one or more other ovals as a vote, then the machine is programmed to identify an overvote and record that as a blank vote. If this happens, your vote for that office didn’t count.

For the state representative race, many cities or towns have more than one representative, with Windham having four. For these ballots, the representative candidate names are staggered on different lines, supposedly to make the ballot less confusing to the voters.

In this case for Windham, a candidate whose name and the oval happen to be where the ballot is likely to be folded can get an unfair advantage in two ways.

First, if the voter votes for any combination of four other candidates and if the machine counts the fold as a vote, then an overvote results, and the four valid votes are not counted.

Second, if the voter votes for less than four candidates (undervote) and the machine counts a fold as a vote, then the name on the fold gets credited with a vote that is not valid. In both cases, the candidate whose name is on the fold gets an unfair advantage in the vote count.

On the Windham ballot, the line for all governor candidates was near where ballots may have been folded. The other likely fold location was near St. Laurent’s name. If there were about 400 misreads on the machines, consisting of about 300 overvotes killing as many valid votes for mostly Republicans, and about 100 invalid votes added to St. Laurent, the Windham discrepancy can be explained.

For those ballots with a vote for St. Laurent and with or without votes for any other candidates, the fold issue would likely not be there.

In Derry for the November 2020 election, they used eight AccuVote machines. One machine was used exclusively for absentee ballots. This machine registered over 750 overvotes (for all offices together) with less than 100 overvotes total on all the other seven machines. This implies a major problem with these

AccuVote machines and folded ballots. Derry had asked the AG’s office to investigate but they did not.

When the information of the Derry overvotes was provided to one of the auditors of the Windham Audit, he arranged to have an inquiry sent to the election officials in all of the state’s cities and towns asking about any discrepancies where more than one AccuVote machine was in use last November. This is to give them some more background information.

It should be considered that these machines may not be equally sensitive across the width of the ballot. This could mean that the potential for a misread may only happen if the ballot is inserted into the machine in a certain orientation, such as front side up and bottom first into the machine. Also, remember that each machine may not be equally calibrated or sensitive in this regard.

Some Legislative suggestions to do as a follow-up:

Some other things to do:

When the Windham Audit results are in, we should have a clearer picture of the ballot counting problem in New Hampshire. None of the above addresses any potential issues with the programming. Having more recounts and audits could help expose programming issues.

8 thoughts on “Are folded ballots a problem for AccuVote machines?”