For at least the second time in six months, opponents of an outspoken conservative have successfully cancelled a speech venue by pressuring hosting organizations. In both cases, the speakers found a different venue and continued speaking.

Earlier this month, the production company providing studio space and production expertise for the Brian Judd Show ended their relationship with the show due to pressure from the show’s critics, Judd said today. 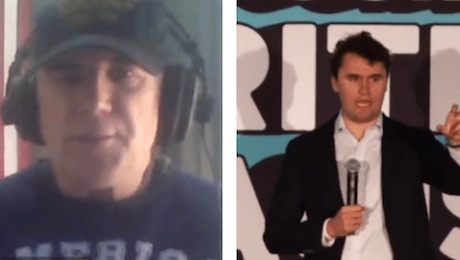 Brian Judd (left) and Charlie Kirk have something in common: the Barre talk show host and the founder of TPUSA (seen here in October speech in South Burlington) both have lost speaking venues due to opposition agitation. Both found new venues.

Last October, Turning Point USA founder Charlie Kirk was ‘cancelled” out of his downtown Burlington hotel ballroom location when a Marxist group threatened to agitate against the hotel in the Burlington business community. The hotel cancelled the engagement. Undaunted, Kirk spoke to a packed house in a South Burlington hotel ballroom instead. Ironically, the location was closer to the UVM residence halls than the waterfront-area hotel, and drew a large number of interested undergrads.

Brian Judd, the outspoken host of a new online current events show with a politically-conservative theme, debuted his first program February 11 in a professional studio in Barre. That business relationship crumbled under pressure from the show’s critics, Judd said.

Judd doesn’t say who is behind the cancelling. However, the Barre native and military veteran is fond of calling the Progressives on the City Council ‘communists’ and has clashed with them repeatedly over their unwillingness to fly the American flag over Main Street on patriotic holidays. Last year, current city council candidate Sue Higby wrote in a letter to the local newspaper that she wanted to speak with contributors to Judd’s 2021 city council campaign.

Judd produced his second and third show from “Currier Park Studios,” A/K/A a Barre location. There is a stark contrast in visual production values, at least for the moment. Fortunately for Judd, his audio quality and speaking voice are both excellent.

Across the Connecticut River in Dartmouth College, conservative speakers Andy Ngo and James Lindsay both recently were denied speaking locations at the college. Ngo made a virtual presentation instead, and Lindsay spoke at a White River Junction, Vermont restaurant.