BURLINGTON, Vt. — Another attempt at smuggling illegal immigrants into the U.S. from Mexico was thwarted at Vermont’s northern border on Wednesday with help from local tipsters.

Francisco Alejo-Medrano, 27, appeared May 2 at the United States District Court in Burlington and was charged with attempting to unlawfully transport six aliens into the country. U.S. District Judge Christina Reiss ordered that Alejo-Medrano, a Mexican citizen, must be detained until further court proceedings.

The criminal complaint indicates that Border Patrol agents at the Newport border station learned Wednesday evening that a group was entering the United States from Canada by foot, near an area known as Goodall Farm in Derby Line. 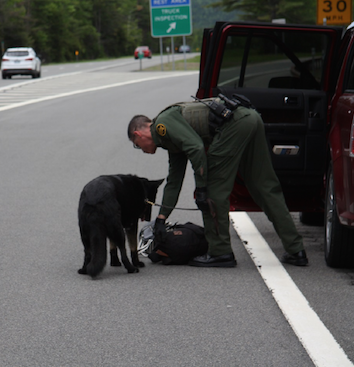 According to a Department of Justice press release, agents dispatched to the area observed six individuals huddled together in a wooded area near a road near the border.

“Shortly thereafter, agents saw an SUV drive up to the group. The vehicle stopped and the six individuals got in. A short time later, agents stopped the vehicle. Alejo-Medrano was the driver,” DOJ states.

The six passengers were all undocumented Mexicans and were charged with unlawfully entering the country.

If convicted, Alejo-Medrano faces up to five years in prison and up to a $250,000 fine, although the final sentence would be determined according to federal guidelines.

All charges at this stage are only accusations and the defendants are presumed innocent until proven otherwise.

According to the release, tips from local Vermonters are vital to keeping the border secure.

“The assistance of citizens is invaluable in helping the U.S. Border Patrol accomplish their border security mission and they welcome community members to help them keep our nation’s borders safe by reporting suspicious activity at 1-800-689-3362,” the DOJ statement says.

Kraig Laporte, a spokesperson for the U.S. Attorney’s Office, told True North these illegal crossings have become a regular occurrence.

“There have been a number of these cases over the last year,” he said.

He added that the new visa-waiver program in Canada allows Mexicans to easily travel by plane into Canada without a visa, which makes entering the United States from the north an attractive pathway for illegals.

“If you fly from Mexico to Canada, they don’t need a visa,” he said. “So they can get into Canada from Mexico quite easily and they try to enter illegally on the northern border.”

He added: “It’s been over a year, [and] we’ve seen since that visa waiver implementation that there’s been an increase of border crossings.”

U.S. Attorney for the District of Vermont Christina Nolan stated last year that plane tickets from Mexico to Canada can be $350 or less.

Stopping crossings at the northern border is a challenge due to its vast rural landscape. There are over 300 miles of Canadian/U.S. border across Vermont, New York, and New Hampshire.

U.S. Border Patrol agent Richard Ross told the Associated Press last year that smugglers are very sophisticated when it comes to taking advantage of the terrain.

Laporte said that groups seeking to enter illegally often pick a meeting spot and wait for someone inside the U.S. to arrive in a vehicle to pick them up.

“We’ve had a number of cases like that,” he said.

He was also asked what kind of sentencing the six illegals might face. He said the six immigrants attempting to enter illegally also face charges.

On May 17, 2018, Salmen Hernandez-Ayala, 48, was apprehended by border agents in Derby after picking up and attempting to transport three Mexican illegal immigrants to New York City.

In October 2017, a man from Newark, New Jersey, was caught smuggling two illegals across the northern U.S. border at Beecher Falls.