As the nation’s capital braces for its second impeachment trial in just over a year and far-flung states clash over COVID-19 restrictions, Kentucky’s governor faces an impeachment probe by state legislators for what his critics say were overly strict rules during the pandemic.

With impeachment threatened by foes who say his COVID-19 mandates violated the state and federal constitutions, Gov. Andy Beshear, a Democrat, sued the state Legislature for overriding his veto of two bills that would rein in his power to impose such restrictions.

At the same time, Kentucky Attorney General Daniel Cameron, a Republican, faces his own impeachment push over what critics say was his poor handling of the investigation into the fatal police shooting last year of Breonna Taylor.

In the Bluegrass State, the Legislature is required to refer a citizens’ petition for impeachment to a committee. 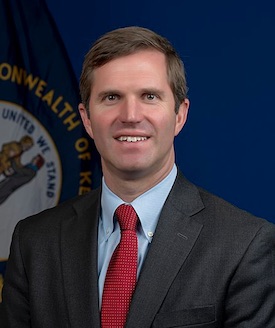 More than 60,000 signatures calling for Beshear’s ouster were delivered Tuesday to the Kentucky Capitol in Frankfort via U-Haul truck, WHAS-TV (Channel 11) in Louisville reported.

Kentucky House Speaker David Osborne, a Republican, appointed four Republicans and three Democrats to a special impeachment committee to consider all the cases—as well as a petition to impeach a state legislator.

The GOP holds a supermajority in the House and Senate, and could reach the two-thirds vote needed to remove a state official.

State Rep. Jason Nemes, a Louisville Republican who is chairman of the impeachment committee, last week sent a letter to Beshear’s office seeking information on the monitoring of churches Easter Sunday by the governor’s office.

“Rather than reaching conclusions by way of speculation, we are requesting some additional information,” Nemes said in the letter. “We have read the reply filed by the petitioners, which references the monitoring of churches by the Kentucky State Police at the direction of the Office of the Governor. This request asks that the governor provide information related to those monitoring efforts.”

None of the impeachment petitions likely will go far, Al Cross, director of the Institute for Rural Journalism and Community Issues at the University of Kentucky, told The Daily Signal.

Petitions are not uncommon, but nothing usually comes of it, Cross said.

“It’s pretty easy to file an impeachment petition around here,” said Cross, formerly a  political reporter for The Courier-Journal, a Louisville newspaper and the state’s largest. “There have been a number of these that have been received and referred to a committee and we never heard about because the committee didn’t do anything with them. In this [Beshear] case, the leadership of the House decided a separate impeachment committee.”

The speaker’s move to set up the special panel indicates a desire to prevent too much partisanship, since the House Judiciary Committee has a 14-4 Republican majority and likely would face intense pressure to impeach the Democratic governor.

“I don’t think this is going to go anywhere. I don’t think there is any kind of impeachable crime against Beshear,” he said, noting that the governor made “political errors” along the way.

Despite the GOP supermajority in both houses, Cross said, he doesn’t think Republicans will engage in a raw power exercise to oust a Democratic governor.

“Then the lieutenant governor [Jacqueline Coleman] would succeed Beshear, and they would have to proceed against her,” Cross said of Republicans. “They’re not taking this seriously. They don’t want it to be taken seriously. But they have a number of members who would cause them trouble if they didn’t at least pay it lip service.”

After some churches announced they would hold worship services on Easter, which was April 12, Beshear said Kentucky State Police would record license plate numbers of individuals who attended any mass gathering, including church services.

Opponents occasionally had called earlier for Beshear’s impeachment, but on Jan. 8 four activists drafted a petition that included multiple affidavits accusing the governor of eight counts of violating the Kentucky Constitution.

The stated offenses included “imposing lockdown orders that denied Kentuckians the usage of their businesses, their personal freedoms of movement, of conscience, of worship, of the ability to gather and speak in protest.”

The petition also accused Beshear of “restricting access to courts and impairing their contracts.”

The governor’s lawyers filed a response saying the petition “cites no facts and little law in a last-ditch effort to upend our constitutional separation of powers, hoping the General Assembly will ignore the judgments of the judicial branch as well as the will of the people in electing their chief executive.”

The seven-member Kentucky Supreme Court unanimously ruled that Beshear was within his rights to proceed under a 1998 emergency powers law.

“And the petitioners cannot overcome that, unlike in any other impeachment matter in nearly 240 years, here the Supreme Court of Kentucky upheld the governor’s exercise of his executive powers in the COVID-19 public health emergency as lawful and necessary to protect all Kentuckians,” Beshear’s legal team said.

On impeachment, the Kentucky Constitution is similar to the procedure laid out in the U.S. Constitution, giving the state House of Representatives the sole power of impeachment and requiring a two-thirds majority in the state Senate to convict.

Punishment, the state’s constitution similarly says, “shall not extend further than removal from office, and disqualification to hold any office of honor, trust or profit under this Commonwealth.”

On impeachment, Kentucky law stipulates: “Any person may, by written petition to the House of Representatives, signed by himself, verified by his own affidavit and the affidavits of such others as he deems necessary, and setting forth the facts, pray the impeachment of any officer. The House shall refer the petition to a committee, with power to send for persons and papers, to report thereon.”

Another impeachment petition targeted state Rep. Robert Goforth, a Republican and former gubernatorial candidate who was indicted for allegedly trying to strangle a woman. Goforth pleaded not guilty.

Cross, of the University of Kentucky, said it’s an “open question” whether a state legislator may be impeached.

Three grand jurors in the Taylor case are among those who said Cameron recommended charging a single police officer for endangering Taylor’s neighbors. Yet, the petitioners complained, he didn’t tell the grand jury how to charge the officers who fired into Taylor’s home and fatally wounded her.

The attorney general says he stands by his work in the Taylor case.