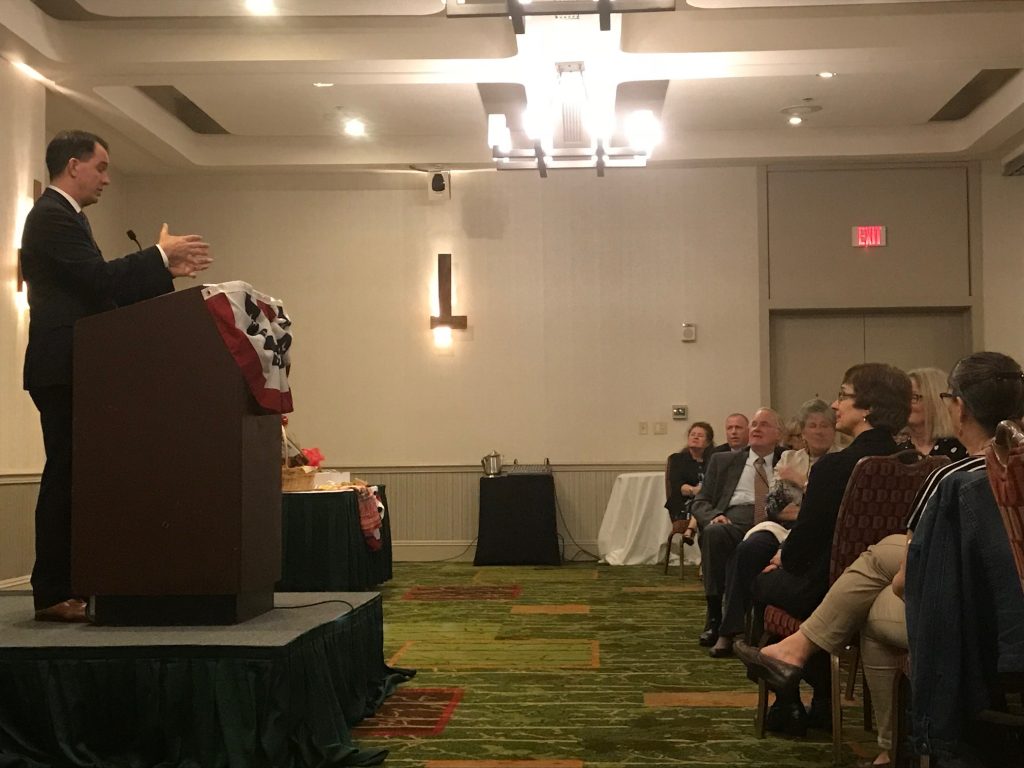 ECONOMY BOOSTER OR UNION-BUSTER?: The scene inside the Burlington Hilton Hotel and out in the street offered two views of former Wisconsin Gov. Scott Walker, who stole the show Thursday night with a vibrant speech about the values of the Republican Party.

The atmosphere inside the hotel was upbeat and enthusiastic. Top Vermont politicians, activists, business owners and media personalities were discussing the party’s future in one of the bluest states in the union.

Outside, protesters engaged in name-calling, deriding Walker as a racist, homophobe and union-buster. In 2015, Walker signed Wisconsin’s right-to-work law, which prohibits mandatory union membership and prevents unions or employers from requiring non-members to pay dues.

But Walker, who was invited by the Vermont GOP to speak alongside Gov. Phil Scott, took to the podium and made an impassioned plea for conservatives to speak boldly about Republican successes with the economy.

During one part of his pro-America speech, Walker shared a story about how one of his great grandfathers, a son of a miner and blacksmith, traveled across the Atlantic and worked his way towards prosperity in the United States.

“He, like a lot of other of our ancestors, and even current day immigrants who wanna come here legally, they know that the American dream in America is a classless society,” he said. “You can do and be anything you want — doesn’t matter what your parents did for a living, doesn’t matter what you look like or where you came from.”

He said GOP success in the 2020 elections would hinge on Republicans communicating the positive impact of Republican-led tax cuts on middle and lower class families. He also accused Democrats of distorting the message on tax cuts.

“A Republican House, a Republican Senate, and a Republican president put into law the tax cuts and saved the typical family in America, a family of four, $2,000 on average.

“I tell [Trump] this all the time — you’ve got to talk about this every day. … The Democrats are talking about it every day and they are distorting the facts.” 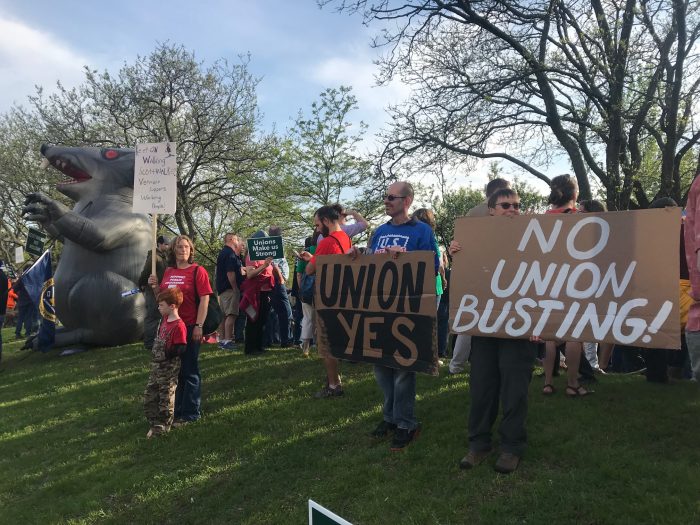 Walker cited a Wall Street Journal poll that indicated less than 20 percent of Americans believe they received a significant tax cut. He reminded that Americans typically don’t recognize the benefit because they rarely check their electronic pay stubs. He pointed to widespread confusion about how withholdings and refunds work, and how that makes it difficult for everyday Americans to see the money they saved.

He also criticized what he sees as the Democrat Party’s slide into socialism.

“For all the talk about how socialism is the promise of power to the people and the promise of greater prosperity, instead, in real time, you see what it really leads to: poverty and power in the hands of the few, which empowers dictators like [Venezuelan President Nicolás] Maduro to do the awful things to the Venezuelan people,” Walker said. “And we can never let that happen in America. We were born free and we will always be free.”

Across the street, crowds of union members and activists expressed anger at Walker, whom they labeled as an anti-labor and anti-progressive politician.

Tom Zenaty, of Shelburne, said he came to the protest out of “concern for all the politics that Walker represents.”

“[I disagree with Walker on] union busting, women’s rights, immigration rights, climate change, and the others my sign indicates. I think the man is oppressive and he’s not welcome here, and I’m really disturbed that our governor is entertaining him,” he said.

Kelly Robtoy, of United Radio Machine Electrical Workers of America, also stood in protest along with many of her union colleagues.

“I’m here to stop union busting in Vermont,” she said. “And it’s shameful that Phil Scott would bring him here to Vermont.”

“I’m here because I’m a member of my union. I’m getting ready to negotiate right now our next contract,” he said. “I’ve worked for 51 years and I’ve never made a living wage, and I’m hoping to help bring a living wage to my co-workers. I’m not gonna be working much longer but they will.”

Back inside the hotel, Vermont’s governor made a speech and reinforced Walker’s message that Republicans are enacting policies that are good for the economy.

“Fiscal responsibility is something that Republicans of all stripes can and should stand together on,” Scott said.

He said his administration at the same time oversaw investments in housing and tuition-free college for the National Guard, while eliminating much of the land-gains tax and reducing the estate tax. Scott also boasted of increasing wired-connectivity and the re-organizing of the Senate district in Chittenden County.

“We can’t make Vermont affordable overnight, and we know there’s so much more to do, like Act 250 reform to support economic growth, tax reform to be more competitive with other states, and once and for all to eliminate the tax on military pensions,” he said.

For four hours, the two Republican governors helped generate fresh enthusiasm for the GOP in Vermont.

Burlington resident Gus Klein, whose pro-Trump flag was vandalized and burned on his property in Burlington last year, also attended the event. He said a key to Vermont’s strength is to be found in local communities.

“You see a lot of community leaders who do a lot of great things for the state of Vermont and for a lot of communities around here, a lot of business owners. That’s what keeps the Green Mountain State rolling,” Klein said.

12 thoughts on “Amid protests, former Wisconsin Gov. Scott Walker says Republicans are winning on the economy”