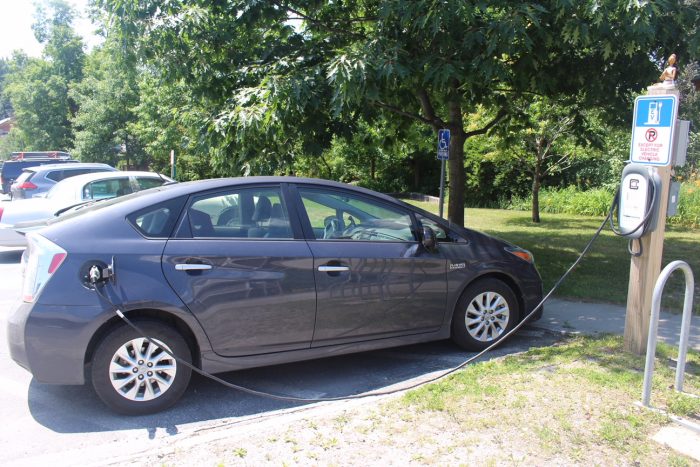 EVS COMING: While there are only about 4,000 electric cars in Vermont at this point, state transportation policy targets want that number to grow ten times over the next four years.

The Agency of Natural Resources this week hosted a virtual public forum about climate change in Vermont, and it focused in on discussions of the Global Warming Solutions Act (GWSA) and carbon emission reduction targets.

Julie Moore, the secretary of the agency, co-hosted the event and provided an update on the Vermont Climate Council and its forthcoming Climate Action Plan.

Among the climate goals discussed were returning carbon emission levels to only 20 percent what they were in 1990 by the year 2050.

“We have to achieve a roughly three-and-a-half million metric ton reduction over the next nine years. So quite a bit a work lies ahead of us,” Moore said.

Jane Lazorchak, the state’s Global Warming Solutions Act director, who hosted along with Moore, said 45 percent of Vermont’s emissions come transportation, 30 percent from thermal heating, and 12 percent from agriculture. As a result, the state believes electric vehicles are a key component of reducing CO2.

“If transportation is emitting the most then we’ll be required to look and cut the most emissions from that sector,” Lazorchak said.

Another goal is to achieve “net-zero emissions by 2050 across all sectors,” which means that any remaining carbon output must be sequestered through methods such as planting more forests.

“It’s also thinking about how we engage with the Vermont public all along the way to co-create the Climate Action Plan, so that we have the resulting buy-in that we need to implement such an ambitious plan,” she said.

In particular, the hosts mentioned using educational outreach to students to inform them about what’s taking place with climate change policy in Vermont and elsewhere.

“There are about $65 million in total investments related to climate action, including $7.4 million for electric vehicle incentives and vehicle repair incentives; $20 million for community work around weatherization, with an emphasis on lower-income Vermonters and their homes; [and] $20 million to help with the development of community-scale renewable energy, particularly solar systems, as well as fuel-switching in individual homes and buildings.”

Moore acknowledged that pushing for more expensive green energy would be a challenge.

“It’s certainly one of the challenges facing the Climate Council,” Moore said. ” … The council will also be looking at the costs. A significant component of the work that we’ve contracted for is economic modeling to get at those numbers because it’s a very important point.”

She added that “changes in individual behavior” will be necessary for the state to reach its emission reduction goals, and that incentives can be used to help move things ahead.

Lazorchak said she expected to have useful data on costs by fall.

“It’s all been at the front and center of everybody’s minds right now, and that economic modeling, unfortunately, won’t be available until the fall. But we do have some preliminary analysis to fall back on and be thinking about from previous bodies of work,” she said.

Lazorchak noted the adoption of electric cars has been going slowly due to cost — low-end EVs start at around $30,000 for a new model — but the state’s target remains high.