CABOT, Vt. — Another Act 46 school merger vote has a local community on edge over the possibility of losing its school.

On Tuesday the voters of Cabot, Twinfield and Danville school districts will vote to see if the towns will complete a three-school merger. The high-stakes election has residents divided.

“The Legislature really didn’t consider how it would tear apart small towns,” Cabot School Board Vice Chair Jackie Folsom told True North. “And it’s not just in Cabot, it’s happening in South Royalton and Rochester and some of the other schools down south. Act 46 is one-size-fits-all, but it does not fit in rural areas.”

Folsom said some residents, weary of ever-rising property taxes, are ready to take drastic measures for relief. In this instance, that could mean closing Cabot High School and leaving the district as K-8.

“By restructuring the students, Cabot School could be zeroed out in two years or more,” she said. “And there is no guarantee in these articles — which would be required to be signed for this to pass — that would say the town of Cabot would always have a pre-K-8 school.” 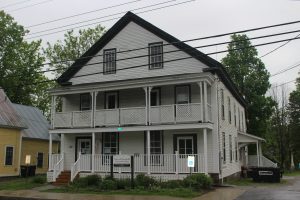 SUPERVISORY UNION NO MORE: The Washington Northeast Supervisory Union would dissolve and Cabot would lose its high school if a vote for a merger with Danville and Twinfield schools is approved on Tuesday.

The pressure is on Cabot because they currently have just around 50 students — about 10 students per teacher. Under the current public education formula, the fewer students a school has, the more it costs taxpayers to run.

“The bottom line is our numbers are going down, and we can’t increase opportunities for kids or even maintain the same level of opportunities if you don’t find ways of sharing,” said Washington Northeast Supervisory Union Superintendent Nancy Thomas.

“I think everyone understands that Cabot is the district that stands to lose the most in terms of that sense of community because the high school would close,” she said. “There have been lots of wonderful things that have come out of that high school, but it’s very small now.”

The WNESU provides governance for two schools, Cabot and Twinfield. Under this merger proposal, Twinfield, a K-12 school, would not change its configuration beyond just adding some more students from Cabot. Currently, it takes students from Marshfield and Plainfield.

Danville is a K-12 school of the Caledonia Central Supervisory Union. Like Twinfield, the proposal would only require taking in some additional students from Cabot.

However, all three schools would undergo a governance restructuring as both supervisory unions would dissolve and reform as one. The new entity would govern the three schools plus another recently approved merger consisting of Waterford, Barnet and Walden.

Peacham also would be included as a stand-alone district, making for a total of seven schools tentatively being called the “Caledonia/Washington Supervisory Union.”

All three communities must vote in favor of the union or the whole merger fails. If it fails, there is no guarantee that the rest of the new supervisory union would stay on course.

Cabot residents learned in April that their high school would close if a merger was approved. The school board later voted unanimously to oppose consolidation.

Folsom said if the merger doesn’t pass on Tuesday, the community would begin new meetings to figure out what to do next.

“We’re under the gun. (A merger) has to be decided by Nov. 30 if we’re to have any of the incentives,” she said, referring to tax breaks from the state.

Sharon O’Connor, another Cabot board member and vice-chair of the WNESU board, said the town chose against giving up its high school just a few years ago, when school choice was on the table.

“We are a pretty small town for one thing, and I think what was interesting for us was four years ago there was a group of people that wanted us to become a choice town and shut the high school down, and there was a lot of rallying around what that meant for certain people to close our school.”

O’Connor said it didn’t seem like the 706 Committee was putting creativity or opportunities for students at the forefront of their work.

Thomas said that one way or another these districts need to prepare for a change.

“(The state) already said we’re too small to save the supervisory union for much longer,” she said. “So, these districts would have to figure out something for somewhere, or they might be put somewhere else.”