Suicide rates throughout the U.S., and especially in Vermont, are on the rise. On average, one person dies of suicide every three days in the Green Mountain State.

A 2018 Centers for Disease Control and Prevention report, titled “Vital Signs,” reveals a marked increase in national suicide rates since 1999. Suicides are up 30 percent in nearly 20 years, and Vermont is included in this sobering statistic.

Facing the stark reality, the Vermont Department of Mental Health (DMH) has not shied away from reporting the statistics and impacts on mental health locally. When calculated by deaths per 100,000 people, DMH reports, Vermont suicide rates are higher than the national average: 118 suicides out of 100,000 deaths. 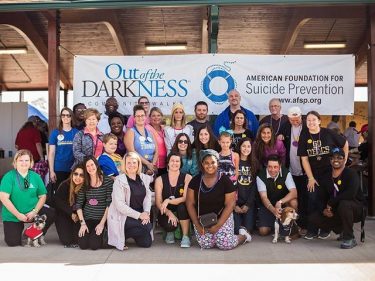 Suicide is among the leading causes of death in Vermont. Pictured: Volunteers at a 2017 Walk Out of Darkness suicide-prevention event.

DMH maintains a scorecard of Vermont suicide-related trends. The scorecard not only provides the public with a barometer of what’s happening within the state, but also it acts as an objective gauge for DMH’s mission. The scorecard is a guideline for the successes or failings of the state’s prevention, early intervention and mental-health treatment and support programs.

DMH’s online scorecard indicates that more men than women die as the result of suicide. Approximately two-thirds of suicides occur with the use of a firearm. According to an American Foundation for Suicide Prevention fact sheet, suicide is the second leading cause of death among the group of 15- to 34-year-olds, regardless of gender.

Aside from the tragic cost of human loss resulting from the desperate act of suicide, the data indicates that there are hidden costs to Vermont residents who may not be directly affected by an individual’s death. Simply put, suicides impact the greater community both emotionally and financially.

While numbers are cold and without emotion when looked at by themselves, they nevertheless speak to the toll of Vermont’s widening suicide crisis.

For example, in 2010 alone, suicides cost the state over $117 million in medical and work loss. In terms of the individual toll, the American Foundation for Suicide Prevention reported an average cost of over $1 million per suicide death in Vermont in 2010.

Brooke Whalen: “Community Health Centers of the Rutland Region is working at creating an environment where patients feel comfortable talking about their suicidal thoughts and providing them with necessary support.”

Both within and outside of the mental health profession in Vermont, many residents directly affected or concerned about suicides in their communities are taking action to bring greater awareness to the problem.

In Rutland and Addison counties, officials of the Community Health Centers of the Rutland Region (CHCRR) network are keenly focused on the silent but growing crisis in their region. CHCRR operates medical offices in the communities of Rutland, Brandon, Castleton, West Pawlet and Shoreham.

“Community Health Centers of the Rutland Region is working at creating an environment where patients feel comfortable talking about their suicidal thoughts and providing them with necessary support,” said Brooke Whalen, a licensed social worker and CHCRR’s behavioral health manager.

Whalen noted that during the past decade, the overall suicide rate in the Rutland region has been rising at troubling rates.

One way to draw attention to the crisis locally has been the annual Walk Out of Darkness community event. This year’s event was held in Rutland City in October. Walk Out is spearheaded by the nonprofit American Foundation for Suicide Prevention. The organization, which has grown to become a major voice and source of research funding, was founded by Emmy Award-winning actress Mariette Hartley in 1987 after her father’s suicide.

The Walk Out event supports the American Foundation of Suicide Prevention’s goal of reducing the annual suicide rate by 20 percent by 2025.

This year’s Rutland Walk Out event encouraged area residents to open up about their struggle with suicide and support families that have faced the loss of a loved one to suicide.

Whalen said Walk Out of the Darkness brings all of the behavioral health providers in Rutland and Addison counties together to spread public knowledge about suicide prevention.

Whalen, who manages the staff of CHCRR, noted that professionals of the mostly rural health care network focus on behavioral science, which they contend is key to suicide prevention. To bolster its mission of suicide prevention, Whalen noted that CHCRR has expanded its professional staff to include four behavioral health specialists, a clinical psychologist, a child psychiatrist, a psychiatric nurse and a social worker with CHCRR Pediatrics.

It also maintains several suicide-prevention hotlines. One of the hotlines connects veterans in crisis with Department of Veterans Affairs counselors via a confidential toll-free number, online chat, or texting venue. CHCRR’s Suicide Prevention Lifeline is staffed 24 hours a day and includes a confidential help line for individuals experiencing suicide thoughts.

But at the root of CHCRR’s mission regarding the suicide crisis is its behavioral science approach to prevention and treatment.