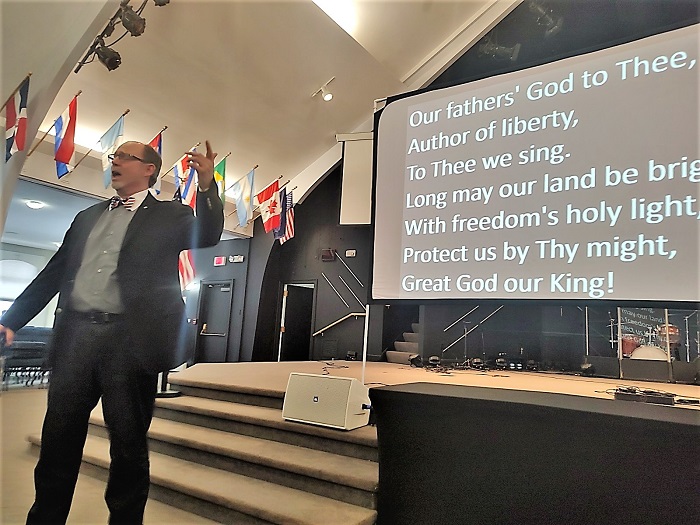 SOUTH BURLINGTON — A world-renowned physicist and a military fraud detector on Saturday took turns on the stage at Vibrant Church to discuss what they see as a prevalence of election fraud involving both electronic and mail-in ballot manipulation.

Dr. Douglas Frank, Ph.D., who is a Nobel Prize-nominated physicist, has become an election fraud expert and data analyst who has worked with 45 states — including legislatures and secretaries of state — to expose fraud.

Speaking to an audience of about 50 attendees, Frank repeated the catchphrase “that’s not natural” to emphasize that statistical anomalies are often red flags for fraud.

For example, he emphasized that all states’ voter rolls — including Vermont’s — are growing at a faster pace than the actual population. In some cases, the rolls are now larger than the listed population.

Efforts to clean the rolls have failed

He also demonstrated that all over the nation, including in Vermont, there’s a pattern that voter rolls are substantially purged right after each election, but then before the next election almost that same number of voters is restored. Frank claimed social justice groups sue states to get the voter rolls restocked.

Col. Shawn Smith, an expert in fraud detection for the military, has spent his career focusing on weapons, surveillance, and reconnaissance systems, and has 25 years of active duty in space and missile operations. After observing the 2020 presidential election, he said he became alarmed that something was not right about the voter counts. He’s now applying his background in fraud detection to scrutinize U.S. election systems.

Smith noted that voting machine hardware typically comes from overseas, and is often made using Chinese labor while owned by Asian countries. He says there are currently insufficient security protocols that deal with “supply chain security.”

Smith said that major voting machine brands have wifi capabilities, and town clerks usually are either unaware of it, or have been instructed that hackers can’t easily access it.

“Dozens of cyberthreat teams and organizations, some of them as large as 10,000 or 12,000 people, these people are dedicated to the compromise of western technology systems and organizations,” Smith said. “They are embedding supply chain compromises into hardware, and they are manufacturing the hardware that goes into our voting systems.”

He has even spoken with machine manufacturers about safeguards against compromised components and parts, and learned that few safeguards exist.

“When I asked [an election machine company representative] what do they do for supply-chain security at the voting systems testing labs, he laughed,” Smith said. “He laughed because they do nothing, they have no standards. The elections system commissioners didn’t even start talking about supply chain security until 2021.”

According to Frank, state lawmakers are little help. “All the legislatures are bad,” Frank said multiple times while recalling stories about presenting top state lawmakers with hundreds of documented cases of fraud and getting no useful response. As an example he cited his interactions with the Pennsylvania General Assembly after the 2020 election.

“Both committees in both houses made a recommendation to the legislature that they throw out the entire state voter rolls in Pennsylvania,” he recalled. “They did, they threw their entire voter rolls because we proved that they had been abused and manipulated. And they hired a firm to rebuild the state voter rolls, that contract was rewarded for $10 million on Nov. 21 after the election.”

So far so good. But then one of Facebook founder Mark Zuckerberg’s firms bought the company selected to redo the rolls for $13 million.

“That was the moment I woke up,” Frank said. “Because at first I was like, ‘Wait a minute, me and my team had just proved that Zuckerberg was a big part of the manipulation.’ The legislature was complicit, the legislature knew this was going to happen, it was a whitewash.”

Only hand counts can be trusted?

According to Smith, the only solution to compromised election systems is to hand count the ballots.

“It’s only where we do hand counts that we get real counts of the election totals,” Smith said.

But he added that hand counts aren’t foolproof if massive numbers of mail-in ballots are floating around with no chain of custody and system of signature verification.

Frank said sheriffs must play a key role in ending election fraud. He said local communities should assemble small teams who to obtain election records and compare them with data from home-to-home canvassing to see who actually voted. He said this activity will expose at least 50 to 100 fraud cases that enable a sheriff to get involved. Sheriffs in turn have the ability to confiscate election machines, among other actions involving fraud.

Frank is coming back

Frank told TNR he is currently analyzing Vermont’s voting data and expects to return to speak some time this year to present his findings.