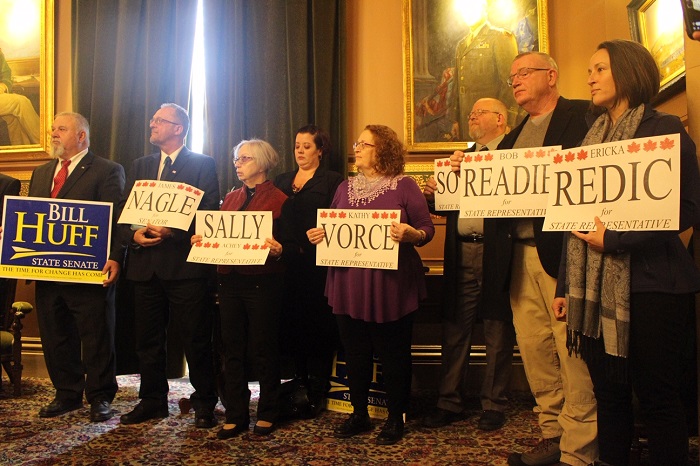 MEET THE “AGRIPUBLICANS”: From left to right, Bill Huff of Thetford, Jim Nagle of Lyndonville, Sally Achey of Middleton Springs, Kathy Vorce of Rutland, David Soulia of Pittsford, Bob Readie of Warren, and Ericka Redic of Burlington are running for open House and Senate seats. Standing behind Sally Achey, middle, is Sarah Toscano of Hinesburg.

The candidates, mostly rural conservatives, are running as “Agripublicans,” a nickname chosen to distinguish the group from conventional Republicans. The group is led by gubernatorial candidate John Klar, who announced his campaign for governor in November.

Klar held the conference and took questions at the end. Throughout, he emphasized that Agripublican candidates will focus on the economy, schools and the opioid crisis. He also said the group worked together to craft a message that could have broad appeal throughout the state.

“We have spent a year crafting this, trying to figure out what would appeal to everyone so we could achieve enough consensus, that the state of Vermont would not be a national referendum on one person,” he said. “We have our issues.”

One Agripublican, Dana Colson, of Sharon, announced his campaign for lieutenant governor. He will run against Meg Hansen in the Republican primary, and the winner will face off against the Democratic candidate.

Colson, who has a background in business, said he has learned leadership by operating a welding company. He also mentioned his volunteer work.

“I currently serve as the financial clerk for my local church, and I have also worked closely with the Tunbridge-based and intelligence-based policing group on the opioid crisis and criminal justice reform,” he said. 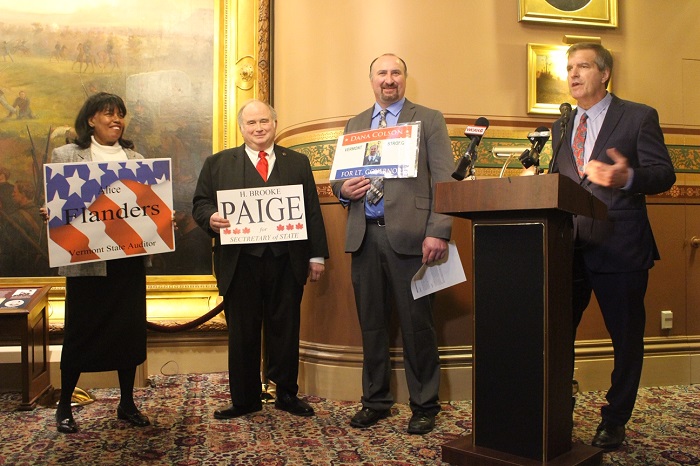 Colson has been in the news in recent years due to personal tragedy. His son, Austin Colson, disappeared in January 2018 and was found dead months later near Beaver Meadow Road in Norwich. The death was ruled a homicide.

Running for secretary of state is H. Brooke Paige, of Washington, who will make a second attempt to defeat incumbent Secretary of State Jim Condos. At the event, Paige explained his desire to do away with primaries in favor of a more stable party caucus system.

“[This is] where the party gets to pick its champions, rather than [have] some random event where anybody can go out and get signatures for any party to run for any office,” Paige said.

Alice Flanders, who announced her candidacy for state auditor, said she has managed massive budgets for the Pentagon and has worked as a naval aerospace engineer, overseeing the nation’s nuclear weapons capabilities.

“Because we have let our state goals into the hands of those whose interests are not aligned with the average people … our state is now in a very serious and bad situation,” Flanders said.

Three Vermonters announced their campaigns for state Senate. Bill Huff, of Thetford, who will run in the Orange District, has spent three decades as an airline pilot and two decades as a certified financial planner. Terry Williams, of Poultney, who will run in Rutland County, is a 35-year military veteran. Jim Nagle, of Lyndonville, who will run for a Caledonia seat, has served 28 years in the U.S. Coast Guard and conducted security for commercial vessels in the aftermath of 9/11.

Six Agripublicans also announced their candidacies for state House. Sally Achey of Middleton Springs, will run in the Rutland-Bennington district. Her resume includes a bachelor’s degree in math from UVM, and graduate studies in applied statistics at Princeton University.

Bob Readie, of Warren, will run for the Washington-7 seat. He is an environmental health and safety officer with experience understanding hazardous materials.

Ericka Redic, of Burlington, is running for the Chittenden 6-1 seat. She has run an accounting firm for six years and invested in a Burlington apartment building that, she says, opened her eyes to the bureaucratic red tape Vermonters face.

Kathy Vorce, of Rutland, is running for Rutland 5-3. She earned an associate degree as a medical office assistant from Southern Vermont College; she’s also certified as a paralegal.

David Soulia, of Pittsford, is running for Rutland-6. He has owned a business as a painting and papering contractor. Other positions have included Humane Society shelter manager, webmaster, computer programmer, and more.

Sarah Toscano, of Hinesburg, said she is running for the Chittenden 4-2 district seat. She said her main issues are supporting small schools, farms and small businesses.

All the Agripublican candidates are running on the Republican ticket.