By now, you’ve likely heard the story of Michael Rotondo, a 30-year-old college dropout from Camillus, New York, who refused to move out of his parents’ house.

For months, they have encouraged him to find a job and have offered to help him find a place to live on his own. “There are jobs available even for those with a poor work history like you. Get one—you have to work!” one of their notes to him said. But he has refused to budge.

They served him an eviction notice in February and eventually took him to court. State Supreme Court Justice Donald Greenwood rightly ruled in the parents’ favor on Tuesday, and while Rotondo called the decision “outrageous” and has vowed to appeal, it would be wise for him to begin searching for his next home. 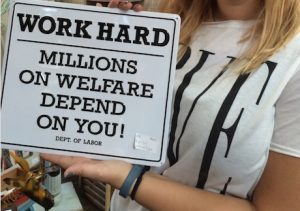 The government spends $1.1 trillion a year on assistance for poor and low-income people through cash, food, housing, medical care, and other social services.

The story of a work-capable young adult mooching off of his parents has become all too common, and unfortunately, many of these people are allowed to mooch off of taxpayers, as well.

Consider the Supplemental Nutrition Assistance Program (aka the food stamp program), which currently pays benefits of up to $192 per month to an estimated 5.4 million able-bodied adults without dependents (“ABAWDs” in Agriculture Department-speak).

While the program, on its face, requires that such an individual work at least 20 hours per week or engage in a job search or training—or at least volunteer in order to receive benefits—federal law provides that states may request that these work requirements be waived for all individuals who reside in any “area” that “does not have a sufficient number of jobs.”

One such area is the city of Syracuse, a 4.8-mile drive east of Mark and Christina Rotondo’s home in Onondaga County. Its latest unemployment rate is 6.2 percent, in line with the national average for the past 50 years, but not a single one of its residents would be expected even to look for work, much less put in 40 hours per week, in order to qualify for SNAP benefits.

If Michael Rotondo finds a place to live there, he can rest assured that he will be able to continue his unspecified “successful” business, which he has called “the overwhelmingly superior choice for the economic well-being over the working of a full-time job,” without actually having to work for his food—all thanks to U.S. taxpayers.

The recent debate on the farm bill in the House has focused primarily on whether those responsible for the care of dependents below a certain age should be made subject to SNAP work requirements, largely ignoring the extent to which geographic-area waivers undermine the existing work requirements for able-bodied adults without dependents who have the least excuse not to work.

For example, my colleague Robert Rector and I found that the farm bill now before Congress, H.R. 2, as drafted, would allow 4.3 million of these able-bodied adults without any dependents to remain exempt from the work requirement. And, along with Mimi Teixeira, we laid out five specific steps Congress could take to encourage work in the food stamp program.

If Congress wants to get serious about encouraging those who can work to do so, it should start by ensuring that those living in places such as Syracuse are not exempted from work requirements during an economic boom.

That would ensure that someone like Rotondo can’t just move 5 miles to join them on the food stamp rolls.