Veterans of decades of political campaigns stood side by side young women and teenagers wishing to build on their progress at the VT GOP Suffrage Centennial Saturday Sept. 12. Vermont Republican Party Chair Deb Billado told them, “We’ve come a long way, baby, but we have a lot to do.”

The Vermont Republican Women’s Coalition honored the 100th anniversary of women’s suffrage less than two months before voters decide whether to elect the 34 GOP women running for state office. A similar event on the State House lawn held August 26 featured no Republicans, nor apparently were any invited.

Several women leaders Saturday spoke of the spirit of American freedom that compels them to win elections in the face of sexism and prejudice — some of it from within the GOP itself. 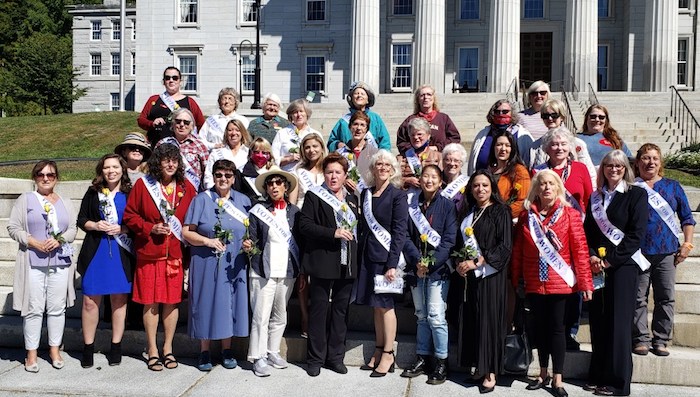 Some of the VT GOP women candidates, incumbents, volunteers and supporters at the Sept. 12 Women’s Suffrage Centennial gather on State House steps.

After co-organizer Rachel Stringer of Colchester greeted the estimated 70 attendees, Jamie Westfall — an obviously talented young worship leader at Ignite Church in Williston — sang the National Anthem a cappella. Then Billado took the podium. “I’m thankful to be a woman in the United States of America,” she said in preface to a thumbnail history lesson. In 1869 the 14th Amendment gives the vote to former slaves — but not to women. In August 1920, the 19th amendment confers universal adult suffrage. In 1971 the national voting age is lowered from 21 to 18.

Billado — first woman elected vice-president and president of the Village of Essex Junction — noted she is one of just 15 state chairs in the U.S. Republican Party. Here in Vermont, 50 women are town chairs. Five women sit on the VT GOP state board — four of them named Deborah.

(This abundance of Deborahs is an interesting coincidence, if indeed that’s what it is. The first known Deborah, a Hebrew in the Old Testament Book of Judges, was a judge, warrior, poet, prophet, singer and songwriter. At a time when effective male leadership was lacking and Israel was in danger of being overwhelmed by an army of superior numbers, she stepped in as a heroic deliverer.)

The three other state committee Debs are Walden lawyer Deb Bucknam, vice-chair and activist lawyer leading the lawsuit against potential voter fraud in the Democrat-led universal mailed ballot election; Board Secretary Deb Ricker; and finance chair Deb Rolland of Hinesburg, a relative newcomer from Ohio. She told Saturday’s crowd about her other important jobs: “wife of Senate candidate Dean Rolland, Mom, campaign manager, and — oh yeah! — working a fulltime job.” The crowd cheered when she added, “We women can do it all, right?” 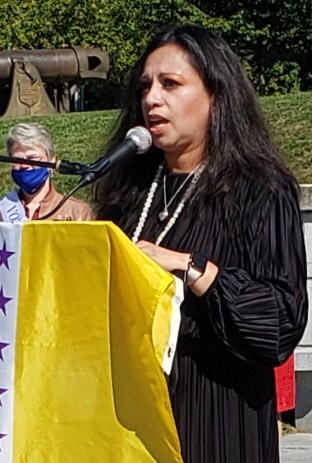 Alma Green, Women’s Coalition member, told the crowd how she emigrated legally from Mexico, married an American and will soon take the Oath of Citizenship. She has little patience for ethnic profilers and anti-American protesters. “When they learn that I am Hispanic, they think I am poor, ignorant, an illegal immigrant, and a Democrat. They are shocked when they learn I am none of these things.” In particular many people are shocked to learn this fact: “I have an MBA.”

As an American Hispanic, she prefers the Republican ethic of opportunity to the Democratic alternative: “They [Democratic Party] ‘take care of them’ and they keep them low. You can see that by how many they have in leadership.”

In a prepared statement read by Billado, Rutland GOP Chair Terri Burke — “mother of seven homeschooled children, all Republicans” — recalled how her grandmother prayed daily for the destruction of communist control over Russia. “Thank God during President Reagan’s administration the stronghold of communism on Russia was broken,” she said.

Rep. Vicki Strong of Albany, a five-term incumbent seeking a sixth term in November, spoke movingly about her son Jesse, a heroic U.S. Marine who gave his life defending universal suffrage. His Marine unit was on a mission to protect public safety in the runup to Iraq’s first post-Sadaam election when anti-democracy forces opponents killed Jesse and other nearby Marines. Nevertheless the election proceeded and Iraq took its first tottering steps towards representative democracy.

State senate candidate and lieutenant-governor nominee runnerup Meg Hansen of Manchester delivered an impassioned call to arms for women Republicans that did not spare some attitudes within the GOP.

“A number of influencers in the Republican Party, both in Vermont and across the nation, treat Republican women as second-class citizens in politics. These voices are fine with women being town chairs, county chairs, volunteers and any role that involves actual work — hours of important but often thankless labor to support our cause. But that’s where they draw the line. Any woman who dares to speak up, any woman who dares to disrupt the status quo from which they benefit, is labeled a “troublemaker” and worse. God forbid such troublemaking women dare to run for an office that may be a higher position than the one that they hold!” Hansen’s speech can be read in full here.

Anya Tynio, 2018 nominee for Congress from the Northeast Kingdom, declared “I’m proud to stand here as a Christian woman, an American woman, and a free woman who intends to vote, in person, on November 3.” Hansen and Tynio are among the many young Vermont women who are making their mark as Republicans: incumbent Enosburg House member Felisha Leffler, Chittenden Senate candidate Ericka Redic, Williamstown House candidate Samantha Lefebvre, Hinesburg House candidate Sarah Toscano, and Putney Town Chair Kate Bowen are just a few of the VT GOP’s here-and-now and up-and-coming leaders.

Nurse, musician, and Congressional nominee Miriam Berry [Guy Page Facebook video] of Essex Junction — a political unknown who swept the field in the August 11 primary – said she was raised Democrat but “30 years ago I walked away from the Democratic Party” because her conservative views more closely matched the GOP. She referenced the French name for Camel’s Hump (le lion couchant) and said “In 2020 we may feel like camels in the desert, but we are also couching lions.”

Other speakers included longtime volunteer Patty Howes, RNC committeewoman Suzanne Butterfield, Women’s Coalition Chair Janet Metz, and House Minority Leader Rep. Patty McCoy, whose elected public service began as Town Clerk in 1991. In the Legislature today she is fighting for support for Gov. Phil Scott’s likely veto of H688, the Global Warming Solutions Act – something that will require working across the aisle with Blue Dog Democrats. She spoke for women in political leadership past, present and future: “I stand here on the shoulders of women 170 years ago who fought for the right to vote.”

Soaking it all in was 16-year-old Grace Heller of Moretown (in photo at top, front row center between Rachel Stringer and Alma Green)  who four years ago “went down the YouTube rabbithole” watching conservative, pro-Trump videos and realized, “oh my gosh my life has changed.” Since then her political outlook has been “Make America Great Again, Let’s Go!” She’s at odds with peers at Harwood Union High School, but that’s okay because the GOP is “the only place I can politically be myself — it’s the party of marriage, individuality, equality of opportunity.”

Unlike many of her peers, she’s no fan of Identity Politics.

As Westfall closed the celebration with Rachel Platten’s 2014 hit “My Fight Song,” women gathered behind her could be seen swaying and singing along: “I’ve got a lot of fight left in me!”