Recent developments in Morrisville and Hyde Park have exposed how zoning regulations, even with the best of intentions, can have negative impacts on efforts to keep homeless families out of sub-zero temperatures during the winter season.

As temperatures were getting well below zero in November, Morrisville businessman Howard Manosh, the owner of the Northgate Plaza Shopping Area, got a phone call late in the evening. An employee told him that at least two young families were living in their cars in the parking lot, and at least one of them had children with them.

Manosh, who is in his 80s and semiretired, was at home and warm at the time he got the call. Moved with compassion, he saw an opportunity to turn an otherwise underperforming hotel in the same plaza — the Plaza Hotel — into a safe sanctuary. 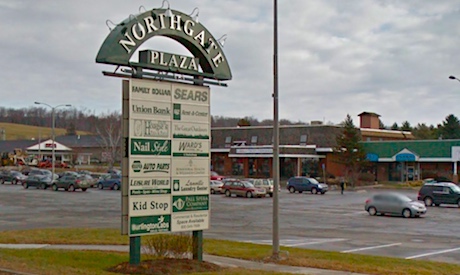 The Northgate Plaza Shopping Area in Morrisville is also the home of the Plaza Hotel. Both are owned by area businessman Howard Manosh.

“When it was first done, they called and it was a dire situation,” Manosh told True North. “It’s hard for me to sleep where it’s warm at home while knowing that people are trying to sleep in cars in the cold parking lot.”

When Hyde Park Sheriff Roger Marcoux heard about the situation, he called Manosh to ask if he could bring another homeless person to the hotel for a warm bed.

In prior years, Hyde Park had a homeless shelter, but it has not been operational due to zoning issues. Earlier in the year, owners learned of issues with the building that needed to be addressed in order for the zoning board to give approval. Those improvements have now been made, but at the time the board had not yet scheduled a meeting to initiate its reopening.

After some social media backlash, the board promptly met and approved the use of the building, but now everyone must wait for the public comment period to end in mid-January before anyone can move in.

When the Morristown zoning administrator learned about the situation at the hotel, Manosh was told that the families staying there shouldn’t go on for too long because there are no permits for its operations. Manosh was informed that the permit process would have to wait for the next zoning review board meeting in mid-February.

Fortunately, the zoning department is letting the families remain without any trouble, according to Manosh.

“Yes, they are still there,” he said. “From what I understand this is a temporary situation. We will wait until the shelters are ready.”

Hyde Park resident Bruce Shields, a former tenant of Manosh, is a lister for the Town of Eden. He says high housing prices in the region are part of the problem.

“The problem in Lamoille County is there are not many people who can afford to buy homes,” he said.

Shields said the general rule of thumb is that, to be affordable, a mortgage should cost less than 25 percent of median income for the region.

Manosh acknowledges that housing is part of the situation, but he sees other problems.

“Well, the housing cost is one factor, [but] a lot of it is drugs and alcohol addiction too,” he said.

Shields said some people see this homeless situation as an example of zoning gone wrong. He noted that the Town of Eden doesn’t have any zoning, so it is able to avoid such conflicts.

“I work in the town office and people will call up and say, ‘What permits do I need to build there?’ [I reply],’There are no permits.’”

Shields says Manosh is a hometown self-starter who steadily built up his own business success. At age 17, Manosh bought a dump truck for starting a business, and he and a co-worker would drive it all day and sleep on a mattress in the garage at night.

“That’s true,” Manosh said. “Unless you’ve been there before, you don’t realize the hardships [of homelessness].”

Manosh later got into the excavation business and well-drilling business, and today he’s one of the wealthiest natives of Lamoille County.

Asked if there’s still a need for the hotel after the shelters are reopened, Manosh didn’t rule out the possibility of continued help.

Shields said that Manosh’s goodwill to the community has not been overlooked.

“Howard has done so much for the community that I can’t imagine they would have punished him in any way,” he said.