Chittenden County state Senate candidate Alex Farrell must believe in long shots. So, too, must the 26-year-old Republican’s campaign supporters, family and friends — including many Vermont GOP notables who gathered Tuesday night to root him on.

The large group came out to attend Farrell’s “Build the Momentum” reception at Nectar’s Lounge and Restaurant in downtown Burlington. 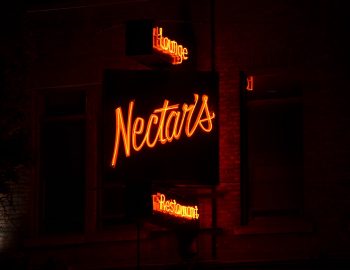 The crowd who dropped by Nectar’s in Burlington to show their support for state Senate candidate Alex Farrell said they are looking for “balance” in the strongly Democratic county.

The gathering, which included appetizers, a cash bar and a rock-and-roll deejay, was designed to energize the campaign in its uphill battle against the strongly Democratic county’s “six pack” slate of liberal incumbents.

The district does not include Colchester, Huntington and Buel’s Gore, even though they are communities within Chittenden County.

“Part of our polling has shown that 70 percent of Chittenden County (residents) want to see balance (in the county). … We want balance, different ideas. The best possible way is to elect Alex Farrell,” she added.

Judging by the crowd who dropped by Nectar’s to show their support, Farrell fans may be blurring the county’s long-held lines of partisanship. Several young professionals, including some African Americans, picked up Farrell campaign handouts. It’s clear the audience liked the man and his message: Make Vermont great again with quality jobs, lower taxes and a business-friendly environment. 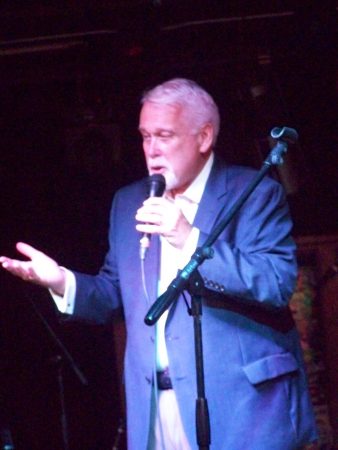 Burlington restaurateur Bob Conlon: “It’s great to have somebody say something other than ‘let’s regulate your businesses.'”

Bob Conlon, owner of Burlington’s iconic Leunig’s Bistro, likes what he sees in the young candidate.

“I read Alex’s campaign brochure and he asks you to give him one of your six votes. I am going to ask you to be more strategic; give him your only vote. If you vote for any of those other five people, that’s a vote against Alex,” Conlon said.

“It’s great to have somebody say something other than ‘let’s regulate your businesses, raise your taxes, have a study committee,'” he said.

“In Montpelier you’re going to see … a young man who is going to hear us and make a difference. There’s something about him. People gravitate to him and listen.”

Handy, who has run a family business for more than 30 years, said he has plenty of experience rewarding his employees without the help of government bureaucrats.

Handy added: “Don’t force me on health insurance; let us run our businesses and not be taxed up the wazoo and always constantly looking in my back pocket. Alex is going to hear what we have to say. … Let’s give him our one vote and the heck with the rest of them.” 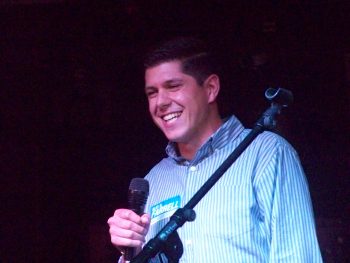 GOP candidate Alex Farrell: “They told me I am too young. But I proved I have experience in the private sector and on commissions in Burlington. I’ve been putting in the work.”

When it was time for Farrell to take the microphone, he quickly put a spotlight on another Republican candidate running for state Senate in the county,  Dana Maxfield. “Give Dana a vote, too,” he said.

“Some people said I wasn’t going to go too far,” Farrell said with a smile. “I replied, ‘Why can’t I go far?’ Then they told me I am too young. But I proved I have experience in the private sector and on commissions in Burlington. I’ve been putting in the work.

“Then they told me a Republican can’t crack through in Chittenden County. They’re running out of excuses. I am seeing lots of momentum. It’s 90 days until the (November) election, so it’s all hands on deck. I need everyone.”

Farrell’s campaign manager, Jeff Bartley, feels good about Farrell’s use of the word “momentum.” Bartley, who stepped down as head of the Vermont GOP in January, took on a new political gig to help his long-time friend.

“There is a very clear path to victory for us,” Bartley said. “We’ve done some polling, which is pretty odd for a Senate race in Vermont, but it is the largest county. I like our starting position.”

He continued: “Seventy percent of Chittenden County voters — now this is critical — believe that they need more balanced representation than the Chittenden County six pack. … These people are saying ‘I want Republicans.'” 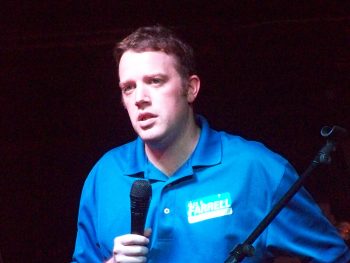 Campaign manager Jeff Bartley: “There is a very clear path to victory for us.”

Bartley said despite running in a blue district, Farrell can appeal to the 65 percent of poll respondents who said Vermont is having a “crisis” over jobs, economy and affordability.

“This campaign is going to be laser-focused on what Chittenden County voters are focused on,” he said.

With Farrell’s town meetings coming up in Shelburne and Charlotte, plus a new campaign commercial set to air on local televisions stations, Farrell’s momentum is real. However, the biggest challenge may be money.

In the candidate’s favor, campaign polling data revealed that 36,000 people in Chittenden County would either vote for Farrell or give him a second look before deciding in November.

State Rep. Kurt Wright, a veteran Republican from the area, dropped by Nectar’s to give Farrell the thumbs-up and some positive words. He told True North that young people are the future hope for Vermont.

“I am in my 60s now and I am excited for the future,” Wright said. “The Republican Party needs to be invigorated with young people like Alex Farrell. I think he projects a good, positive image for the party and for Vermont in general. Young people are excited to see a young professional who is bright and articulate.”

“Yes, Alex is a little bit of a long shot, but then long shots do come in,” he said.