The Winooski School Board voted to reverse course and keep the jobs of two Winooski teachers during their meeting Monday.

Will Andrews, a social studies and iLabs teacher, and Jeff Duggan, a math teacher, were slated to lose their jobs by March 30 due to staffing cuts.

The Winooski School District recommended the staff reductions to the school board, hoping to free up funds for two additional pre-K classes on Dec. 1, 2021. 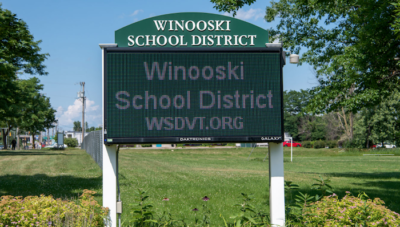 Cuts like this are not uncommon with tight town budgets. Winooski students, however, say teachers like Will Andrews and Jeff Duggan are invaluable.

Will Andrews is a high school social studies teacher, and helps facilitate the iLab. The iLab was established in 2013 as a setting for student-centered and community-based learning, according to the presentation provided by the Winooski School District March 28.

“Students come into iLab with a variety of different needs. Sometimes that is a passion to study a content area we don’t offer courses in. Sometimes that is the need to meet a graduation requirement,” said Lindsay Cox, an iLabs teacher at Winooski.

Students can go to iLab to follow their niche passions, and teachers like Andrews help students enrolled in the course discover their interests.

While he’s a social studies teacher by title, he engages students through a range of subjects in the iLab and outside of school.

Andrews also does pro-bono music writing with student Aymard Math to honor the centennial celebration of Winooski this month, for example.

“My license might just say I am just a social studies teacher in the high school, but in reality I am much more than that,” said Andrews in a statement on March 9,  “In 2005, I chose to do my student teaching at Winooski because I loved what the school district stood for.”

“I have learned the students I work with care a lot about me, my colleagues are willing to fight for my job, and take time out of their busy lives to support a colleague in need,” he continued.

Well over 100 community members, teachers, and students attended the March 9 school board meeting, and almost an hour and twenty minutes were devoted to public comment.

Each expressed sincere frustration over the cuts.

Albina, Ivy, Eliza, and Klara spoke out for Mr. Duggan, saying he’s more than just a teacher, that he gives a space for serious class discussion, challenges his students, and helps them find their passions through after-school and extra-curricular programs.

“By making this decision, they are taking away the Winooski high school and middle school students’ chance at a good education,” said eighth grader Eliza Willis at the meeting, “when I was told about the decision I decided we should protest and sit-in.”

“Me and some other students got a majority of the middle and high school to sit-in,” continued Willis.

Students also petitioned to keep Andrews and Duggan on staff.

“When students brought up these concerns at a sit-in, it was called an act of civil disobedience. If students are left out of important decisions involving the future of their education, we should have the right to question the people making those decisions without having to repair or accept consequences,” said Fayth White of a student sit-in performed in protest of the reductions in staff. Some students hope to bolster their perspective by pushing for a student representative on the board.

Matt Gile, president of the Winooski Educators Association, which is the teacher’s union, said more community input was needed.

“When these decisions were made, you know, the stakeholders and faculty members and the Education Association and community members weren’t fully included in that decision making process and, you know, I hope the school board is working to change that moving forward,” said Gile.

Following the uproar, the board held a special meeting to address concerns about the change to staffing, and perceived changes to the iLab class in Andrews’ absence on March 28.

The district upheld its stance throughout the meeting, asserting that the board was adequately informed of the staffing changes long before they were made.

“I just want to make sure the board understands, you have a budget. So if you rescind the RIFs [reductions in force] and bring them back,” said Interim Superintendent Kevin Dirth, “That’s around $172,000. What would you do, would you cut something else, would you just try to forget it and deficit spend and hope at the end of the year things work out okay?

“If you did do that, wouldn’t it be in some ways, going against the will of the 600+ voters who voted for the budget as planned?”

Though, when the budget was passed by voters, they approved a dollar amount, but were not necessarily aware of the details of the plan, Board President Tori Cleiland pointed out.

“What I was hearing is the potential of not feeling like we had complete information for the impact of the decision we made, and potentially making some sort of shift about that,” said Cleiland.

Board member Allison Burlock proposed a motion to rescind the two staff reductions, to call on the administration to present the board alternatives, and to refund Duggan and Andrews’ positions. It passed 4-1.

Board member Alex Yin voted against the motion.

“One of the hardest things about being a school board member is that tough decisions have to be made,” Yin said, “having done the budget and budget presentations for now 6 years, I did not feel like I had incomplete information.”

“Sometimes the hardest part is that we have to govern out of policy, and that does mean we have to do better at getting the voices,” he continued, “I get that sometimes tough decisions make me unpopular. But I also want us to be careful that we do not villainize or pit teachers against administrators.”

Gile thanked the board for their open-mindedness.

“I do appreciate that the school board really took our concerns really seriously and tried to fix that and is now trying to seek that input moving forward,” said Gile.

One thought on “Winooski School Board bows to community pressure, keeps teachers”