This article by Mike Donoghue originally appeared July 29 in the Brattleboro Reformer.

WILLISTON — Six Windham County adults were among 11 protesters arrested for blocking traffic during a demonstration outside an office for U.S. Immigration and Customs Enforcement (ICE) in Chittenden County on Saturday, Williston Police said. 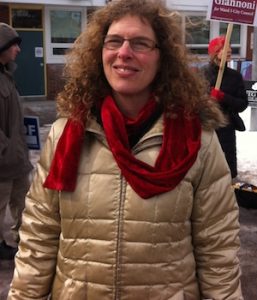 Rachel Siegel, a former Burlington city councilor, was among those arrested Saturday on charges of disorderly conduct.

Also two juveniles, including a 16 year-old from the Williamsville section of Newfane, face legal proceedings in Family Court in Burlington for the sit-in, police said.

Williston Police said they had spoken with the organizers ahead of the protest and had been told some demonstrators planned to get arrested for blocking traffic near 188 Harvest Lane.

Later some demonstrators moved into the street to block traffic. Each protester was asked one-by-one by a police officer if they wished to leave. The 13 that declined to move were taken into custody, Sgt. Bart Chamberlain said.

Most protesters stayed out of the road near the ICE Administrative office. Several businesses are nearby, including the New England Federal Credit Union, Natural Provisions and UPS.

Police estimated less than 100 activists were present for the protest.