David Blittersdorf, CEO and founder of AllEarth Renewables, has become synonymous with industrial-scale wind power over the past decade, and for the second time in as many years, he’s calling it quits in Vermont.

Dairy Air Wind is the most recent wind turbine project that he had under development in the state, and he says he’s done moving it forward through the development process. The installation would have been a single-turbine installation on a 450-acre dairy farm in Holland.

Blittersdorf cites a hostile political climate for his recent decision, and he credits Gov. Phil Scott, who campaigned on opposing industrial wind development in 2016, as the main force behind this new reality. 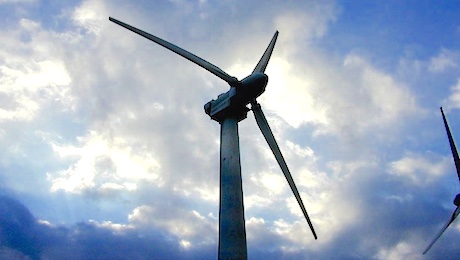 NO MORE WIND: David Blittersdorf, CEO and founder of AllEarth Renewables, is calling it quits for the second time in as many years on further wind projects.

“In 2012 there were over a dozen wind projects in development. Now there are none,” he said. “This is truly a sad state of affairs for Vermont. Climate change is the greatest challenge of our time. We must combat the carbon emissions crisis and move to a renewable energy-based future.

“We simply can’t do this without wind energy as part of the mix. Anyone who tells you otherwise either doesn’t understand the science, or is lying.”

In particular, Blittersdorf expressed frustration with the governor’s appointees to the Vermont Public Utility Commission.

The Dairy Air Wind project received a contract to sell electricity to Vermont in 2016, but it hasn’t made much progress since. According to the Blittersdorf press release, “given the current regulatory and political environment, project leadership no longer believes that acquiring a CPG [certificate of public good] is possible.”

Blittersdorf says he doesn’t think any wind project can move ahead now.

“If Vermont is saying no to a project like Dairy Air Wind, we are really saying no to everything,” Blittersdorf said.

He added: “Governor Scott has gotten away with a de facto ban on wind energy without paying the political costs. It is time for Vermonters to step up and demand real action on climate change. Until we change the laws and move toward being powered by 100 percent renewable energy, good renewable energy projects like Dairy Air Wind will continue to fail in permitting.”

This is not the first time Blittersdorf has given up on doing business in Vermont. He put out a similar statement two years ago when he said developers are “being slowed down due to the rules and the present administration that wants to see that some things don’t happen.”

Blittersdorf-backed wind projects have developed a reputation for dividing communities with advocates wishing to fight climate change and opponents concerned about the health and environmental impacts that the turbines have on the local communities.

One of the most vocal opponents of industrial wind turbines in Vermont has been Steven Therrien, who formerly lived near the 40-megawatt Sheffield Wind Farm. While that was not a Blitersdorf project, he had said his family suffered so much from the sound and “infrasound” coming off the project that his family sold their home at a big loss. Therrien passed away suddenly at home on Jan. 2.

When lawmakers took action three years ago to set decibel limits for turbines, to protect Vermonters’ health, Blittersdorf’s reaction was that the limits were too stringent. He said they would amount to a “ban on wind.”

Annette Smith, director of Vermonters for a Clean Environment, has been a critic of Blittersdorf. She told True North that Vermonters are “celebrating the end of aggressive wind energy developers who have attempted to force inappropriate technology into Vermont’s rural communities that oppose industrial wind turbines.”

“We hope that renewable energy developers have learned from the numerous failed industrial wind turbine proposals of the last decade how important it is to work with the people who live here,” she added.