For most American families, Thanksgiving is a time to gather with loved ones, eat delicious food and perhaps watch some football.

But not everyone is pleased with the celebration of this holiday, and some have taken to maligning its “originators,” the Pilgrims. 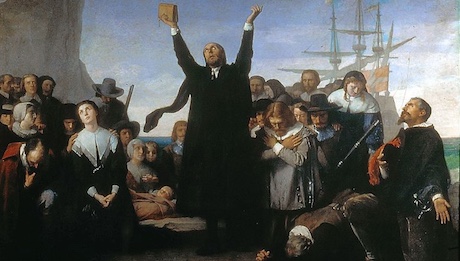 The Pilgrims in America

An editorial in Al Jazeera labeled Thanksgiving a “thoroughly nauseating affair,” one that is “saturated with disgrace.” Other articles have called the Pilgrims genocidal toward Native Americans, or argued that the original idea of a Thanksgiving feast is a “myth.”

“Debunking” the nature and origin of Thanksgiving seems to be turning into its own cottage industry.

But the Pilgrim Thanksgiving story is based on real events. The small band of religious dissenters who crossed an ocean to a dangerous new world have, rightly, been given special prominence in the origin story of the United States.

A year after the Pilgrims landed in what is now Massachusetts, Gov. William Bradford called for a day of thanksgiving. As historian Rod Gragg noted:

The Pilgrims were not the first Europeans to hold a thanksgiving event in the New World — although they appear to have been the first to do so in New England … It was the Pilgrims of Plymouth, however, who would be credited with establishing America’s distinctive Thanksgiving holiday — thanks to a joyful observance sometime in the autumn of 1621.

The Pilgrims gathered for a three-day feast with about 90 local Wampanoag Indians to celebrate a bountiful harvest following a year of toil (over half of the Pilgrims had died since they set out for America in 1620).

Though the food on the menu excluded modern items like pumpkin pie and cranberry sauce, those who gathered for that Thanksgiving likely ate wild turkey, among other foods common in the area like venison and shellfish.

While later conflicts would ensue between the Pilgrims’ descendants and the descendants of the Indians who feasted with them, the initial contact between the cultures was positive and beneficial.

Political misunderstandings unfortunately led to future conflicts — in particular King Phillip’s War—in which atrocities were committed by both sides.

The Pilgrims would certainly be foreign to the conventions of modern America. They were, after all, a different people who lived in a harsher world than ours. But they don’t deserve to be maligned as genocidal monsters, nor should we dismiss the fact that they set incredibly beneficial norms for a future American culture.

Though America’s Thanksgiving conventions have morphed and evolved over the years, Thanksgiving has retained a permanent connection to the Pilgrims of New England. Many of the traditions they passed on have become integral to what is now the cultural heritage of the United States.

The Pilgrims came to America as part of a quest to be distinct. They set out to the New World to establish a new religious, social, and political order — to be free from the constraints of the Church of England, and free from what they saw as the corrupting influences of Holland, where they were staying temporarily.

It wasn’t necessarily religious liberty or pluralism that the Pilgrims sought, but space to create a society based on strict Protestant Christian teachings. As Massachusetts Bay leader John Winthrop once exclaimed in a sermon, the new colonies would be as a “city upon a hill.”

The Puritans wanted to be a beacon of light in a fallen world. “The eyes of all people are upon us,” Winthrop said.

Nearly 400 years later, the idea of America as a kind of promised land continues to resonate.

The other great legacy the Pilgrims left us was a tradition of political consent and the seeds of republican government.

The Mayflower Compact, a relatively simple document, established a kind of covenant between the citizens of the new colony. It was the first such document in the New World creating a “civic body politic” through clear, written guidelines. It was an indirect antecedent to the Constitution of the United States and our tradition of placing laws above men.

Undoubtedly, the modern holiday of Thanksgiving has evolved from being a regional and haphazard holiday to a nationally celebrated one. Notable New England orators, such as Daniel Webster, kept the Pilgrim flame alive in the early 19th century by singing songs of remembrance of their way of life on “Forefathers’ Day,” a Thanksgiving precursor that is still celebrated in Plymouth, Massachusetts.

But Thanksgiving as we know it never became a formal holiday until 1863, when President Abraham Lincoln nationally recognized it. Magazine editor Sarah Josepha Hale had advocated a national Thanksgiving holiday for decades.

Thanksgiving has since grown to become a significant part of our nation’s shared cultural inheritance. Though our customs have evolved over the years, Thanksgiving has retained a permanent connection to its origins with the Pilgrims of New England — and for that, we can be thankful.