Anyone who’s gone to college in the past few decades has probably heard some form of this phrase to excuse the failures of socialism and distinguish between “nice” socialism and the “mean” socialism of, say, Fidel Castro’s Cuba.

Oh, and maybe communist Cuba isn’t all bad, they say. Well, yes it was and still is.

Regardless of the excuses for actual authoritarian regimes, socialists typically try to soften what their ideas would look like in reality and dodge the endless historical and present examples of the ideology’s failure.

Sen. Bernie Sanders, I-Vt., continually tries to thread this needle—essentially relying on the old Cold War leftist analogy of not wanting to be like Washington or Moscow. 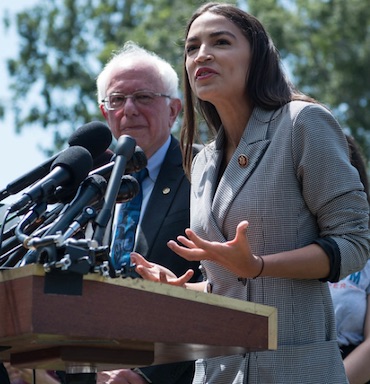 Sanders was asked by a Russian immigrant and student from the University of Michigan at a Fox News town hall Monday how his brand of “democratic socialism” would be different than the kind that led to the horrors of the USSR.

The Gulag, the Soviets’ infamous network of prison camps, held as many as 17 million political prisoners in the 1930s and 1940s, many convicted based on false testimony.

It’s good to hear Sanders at least recognize this, and it’s a shame he didn’t take this more seriously in the 1980s when the Soviet Union was still a threat and Sanders was telling Americans about all the neat things the Soviets do better than America.

Not to mention his efforts to look at the bright side of various other socialist, communist, and authoritarian regimes. Sanders has a knack for dumpster diving in the ash heap of history

But if we take Sanders at face value that he makes a huge distinction between good and bad kinds of socialism, what should we make of that? Choose the right path on the road to socialism and end up in utopia, choose the wrong one and end up with dictatorship?

National Review’s David Harsanyi wrote about why this is an absurd way to look at socialism as an idea. He noted that it’s true not every socialism system leads to absolute economic collapse and dictatorship. For instance, Israel’s early socialist experiments, Harsanyi explained, merely kept people poor, not starving.

Here is the critical point, though.

“[L]eftists like Bernie like to act as if socialist ideology is incompatible with totalitarianism, when the opposite is true,” Harsanyi wrote, adding:

The nationalization of industry and dispensing with property rights—necessary for any genuine socialism to occur—can’t be instituted without coercion and a centralized authoritarian effort. And even if the effort to redistribute property is first supported by the majority, as soon the state comes for your stuff—and it always does—the ‘democratic’ part of the equation starts to dissipate.

This is essentially the reason why a socialist system leads to tyranny and why a constitutional system, such as the one created by our founding generation, leads to liberty and prosperity.

In the most basic sense, the distinction between the outcomes of these systems comes down to an understanding of human nature.

The Founding Fathers were deeply concerned with placing limitations on power to protect the equal, natural rights of citizens and create a free and functioning country.

A socialist society can’t rely on strict limitations on government power, as a free society is inherently, materially unequal. Left to pursue their own goals, people of various abilities and motivations will achieve different outcomes. Even the general desire to “pursue happiness” as each of us sees it typically will end with highly varied outcomes.

And no system, no matter how crafted, can make up for the individual variances of our lives. Socialism is the tool that leftists dream will smooth over inequality, will lift up the oppressed to put them on equal footing with the privileged.

To fulfill its promises, socialism must inherently be authoritarian. To get people to fork over their wealth, force citizens to make up for economic shortages detached from the variance of supply and demand, and ensure that nobody rises too much or falls too low, a powerful, compulsive, and ultimately unlimited government is necessary.

The problem is, unlimited power in the hands of a monarch, a mob, or a central committee always will be prone to rampant abuse and will sacrifice the God-given rights that are the very foundation of a just government.

Not only is freedom sacrificed but, perhaps ironically, so is community as society devolves to seeing the blunt instrument of the state rather than family and civil society as the basis of well-being.

So although socialists, or democratic socialists, or whatever they like to call themselves, continually dance around or dismiss the evidence that so many socialist countries have devolved into dictatorship, the reality is that authoritarianism is a bug in the system, not an outlier.

Your country may survive a mild case of socialism, but a disease is still a disease.

4 thoughts on “Why ‘real’ socialism leads to tyranny”