This year, as in years past, eighth-graders in Biloxi, Mississippi, began reading the classic American novel “To Kill a Mockingbird.”

And then, partway through and with little warning, they stopped. 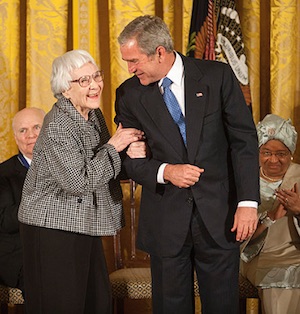 President George W. Bush awards the Presidential Medal of Freedom to “To Kill a Mockingbird” author Harper Lee during a ceremony Monday, Nov. 5, 2007.

Why? Because, according to the school board vice president, it “makes people uncomfortable.”

If you attended American schools within the last few decades, chances are you read Harper Lee’s “To Kill a Mockingbird.” It is a staple of American literature and a world-renowned classic, having sold 40 million copies since its first publication in 1960.

It also won the Pulitzer Prize for fiction in 1961, and the book’s dramatic on-screen portrayal in 1962 cemented its fame.

America has overwhelmingly embraced “To Kill a Mockingbird,” so its sudden rejection in Biloxi, Mississippi, is noteworthy. And yet, in our day of hypersensitivity and student coddling, it’s hard to be completely shocked at this.

The concern that drove the school board’s decision is clear: “To Kill a Mockingbird” contains some content that is shocking and will indeed make some students uneasy.

Of course, this is by design. Set in 1930s Alabama, the book is replete with use of the N-word and other racial epithets. The entire culture portrayed in the book is marked by prejudice toward African-Americans, with the exception of the main protagonists.

Since the book is a social commentary on racism in the Jim Crow South, this is to be expected.

Yet this is what administrators in Biloxi want to shield their students from.

“[We] can teach the same lesson with other books,” Kenny Holloway, the school board’s vice president, told the Sun Herald, a Mississippi newspaper. “It’s still in our library. But they’re going to use another book in the eighth-grade course.”

Having read this book aloud with my own fellow students back in the ninth grade—bleeping out the N-word all the way through—I get the dilemma. This book is not for the fainthearted. Certain characters openly demean the dignity of African-Americans. Evil is put on full display.

But that is exactly the point, and it’s what the Biloxi school board fails to grasp.

There is grave injustice in our world. And in order to confront those things as citizens, young people must be morally well-formed. They need to learn what evil is, and then be shaped into the kinds of people who can live out virtue for the betterment of society.

This does not come naturally for us. Human beings are born ignorant, narrow, and morally incompetent. The whole purpose of education is to move young people out of their infantile state into moral and intellectual maturity. It’s a process of liberation.

But students will never reach the point of liberation if their teachers shield them from evil.

Part of moral maturity is being able to stare evil in the face, to look on it with mourning, and to respond by doing what is right—even at great personal cost.

That’s the kind of maturity embodied by Atticus Finch, a main protagonist in “To Kill a Mockingbird.” This man stared evil in the face and, at great cost to himself, made a stand for justice.

If our students can’t even read lines from “To Kill a Mockingbird,” how do we expect them to grow up into the kinds of Atticus Finches we want serving our society?

The great irony is that in shielding their students from “uncomfortable” things, school administrators are not actually protecting them. They are consigning them to lives of moral weakness and mediocrity, and doing a disservice to society as a whole.

The other irony, of course, is that “To Kill a Mockingbird,” with its “uncomfortable” language, was a tremendous force for good in the 20th century. It played a role in moving public opinion toward the cause of civil rights.

A similar dynamic played out with “Uncle Tom’s Cabin,” a book that contained even more severe scenes of brutality against blacks. That book helped fuel the abolitionist movement in the 1850s.

Were the readers of these books scandalized? Were their consciences marred beyond repair? Would they have been better off sticking to more polite literature?

If America is a better place today because of abolition and the civil rights movement, then we should rejoice that these books were widely read. And heaven forbid we should see ourselves as somehow above them.

The task of education is the task of citizen-making, and in an important sense, soul-making. If we want to mold students into citizens who are morally competent, then we must lead them out of infancy by helping them grow thick skin and large souls.