The order’s statement of purpose took direct aim at the “Medicare for All” proposal supported by several Democrats vying for their party’s 2020 nomination for president:

“Medicare for All” would take away the choices currently available within Medicare and centralize even more power in Washington, harming seniors and other Medicare beneficiaries. […]  It would be a mistake to eliminate Americans’ health care choices and to force them into a new system that is effectively a government takeover of their health care.

Medicare for All would indeed severely restrict options for patients, making all but the most specialized health coverage plans illegal.

Under Section 107 of the Democrats’ bill, “it shall be unlawful for a private health insurer to sell health insurance coverage that duplicates the benefits provided under this Act” or for an employer to offer such coverage. 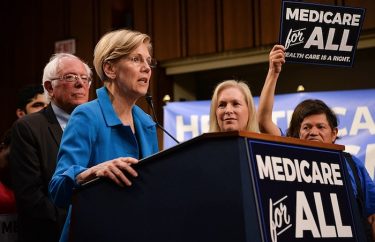 By contrast, Trump’s executive order dictates that “the secretary [of health and human services] shall identify and remove unnecessary barriers to private contracts that allow Medicare beneficiaries to obtain the care of their choice.”

As almost 60 million Americans are enrolled in the Medicare program, giving them more choices to direct health care dollars will significantly strengthen the provider market. The administration expects that this will “facilitate the development of market-driven prices” that should benefit not only Medicare beneficiaries, but all Americans.

The executive order seems to have been informed in large part by the strengths and successes of Medicare Advantage, the market-driven counterpart to traditional fee-for-service Medicare.

Medicare Advantage should certainly be a model for health care reform, as average premiums have been declining. According to the federal Centers for Medicare and Medicaid Services, the expected average premium this year should represent a 6% decrease from 2018 while simultaneously increasing benefits.

The decrease in price over the history of the program has been even greater.

“Premiums have plummeted by 28%,” Trump said. “They’ve gone down. And they’re now at the lowest level in over 10 years.”

The administration also hopes to streamline the development and approval process for new drugs, an area that has long needed reform.

Currently, preclinical science research that yields a promising drug must undergo three phases of clinical research before the approval process. The executive order merely directs the secretary of the Department of Health and Human Services to study opportunities for streamlining, so it remains to be seen whether any such efficiencies may be realized.

The Centers for Medicare and Medicaid Services recently revised payment policies to incentivize the development and use of critical new drugs, which—when added to potential reforms from the executive order—may dramatically reduce the time and costs of bringing needed drugs to market.

Section 5 of the executive order addresses one of the most pressing issues in health care; namely, the regulatory and bureaucratic burden that takes a doctor’s attention away from the patient. Regardless of where one stands on how to provide health care coverage, the patient-doctor relationship must be fixed.

The executive order directs the HHS secretary to propose reforms that “would eliminate burdensome regulatory billing requirements, conditions of participation, supervision requirements, benefit definitions, and all other licensure requirements […] that are more stringent than applicable federal or state laws […] .”

As Medicare is the single largest payer for health care in the United States, the administrative requirements for Medicare already affect the medical field at large.

The evaluation and documentation manual for billing Medicare has become the standard form of documentation in America and an enduring government footprint in the exam room. It’s largely unchanged since 1997, when pen-and-paper documentation was the norm, and has not transitioned gracefully into the electronic age of the mouse and keyboard.

As Seema Verma, administrator of the Centers for Medicare and Medicaid Services, wrote in a tweet:

Right now, clinicians recording office visits to bill Medicare have to wrestle with guidelines from the ’90s. But CMS is bringing their lives into this century by proposing to adopt coding guidelines up to date with today’s medicine.

As it stands now, physicians are all too often spending twice as much time with their computers as they are with their patients. That does not include the extra time spent after the workday completing clerical work.

Careful and thoughtful reforms here that reflect clinical workflow, rather than just billing requirements, will have a significant and wide-ranging effect on the availability of providers and the cost of their practices.

The president’s executive order comprises a broad range of reforms and directives that, taken together, have the effect of lightening the burden of government on the practice of health care.

We shall see what proposed revisions and reforms may come out of this. But the effort of “protecting and improving Medicare” offers an alternative vision to that of Medicare for All — one in which patients can choose what is best for them and where doctors are free to treat them.

2 thoughts on “Opinion: Why new Medicare reforms offer superior alternative to ‘Medicare for All’”