The New Yorker caused a stir when it portrayed civil rights hero Martin Luther King, Jr. kneeling alongside NFL protesters Colin Kaepernick and Michael Bennett on the cover of the most recent edition of its magazine.

The artist, Mark Ulriksen, wrote of the controversial image, “I asked myself, what would King be doing if he were around today?” 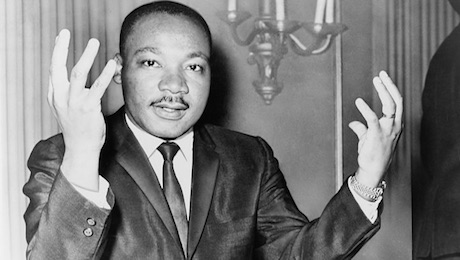 While it may be difficult to assess what King really would have thought about this modern protest, it is worth noting that there have nevertheless been critical differences between his movement and the one Kaepernick launched.

“I’m sure that if King were around today, he’d be disappointed at the slow pace of progress: two steps forward, 20 steps back,” Ulrikson continued. “Or 10 yards back, as the metaphor may be.”

It is, of course, difficult to divine what King would have thought about the NFL protests and whether he would have seen them as a valuable contribution to his aims.

King’s daughter, Bernice King, supports the protests, and said, “People didn’t approve of the way my father protested injustice either — said he was causing trouble, called him an ‘outside agitator.’”

But King’s niece, Alveda King, who had generally disapproved of the protests, said of the New Yorker cover on Fox News: “My Uncle MLK and father A.D. King were men of God who often ‘took the knee’ in prayer to God for repentance and reconciliation during their Christian ministry. Prayer is stronger even than protest.”

“We do have to have respect for our flag, for our anthem, and we really have to care about each other.” she continued.

While it may be difficult to assess what King really would have thought about this modern protest, it is worth noting that there have nevertheless been critical differences between his movement and the one Kaepernick launched.

Certainly, many have found the specific protest against the flag to be insulting and off-putting, a bad attempt to place a wedge between Americans over a universal value of loving one’s country despite policy or personal differences.

The Weekly Standard’s Mark Hemingway wrote of how the kneeling demonstration has been particularly galling to many who simply see it as an act of disrespect to the United States and how the NFL protests have failed to match the civil rights movement.

Hemingway wrote in The Federalist:

People unavoidably see [kneeling for the national anthem] as disrespectful. Drawing attention to yourself and your cause at the one time we come together to collectively express our patriotism and shared American values is going to be unavoidably be seen as unpatriotic. That actively repels people instead of appealing to commonly held political values.

King’s success came from shining the spotlight on injustice, yet also celebrating and espousing the United States’ deepest values expressed in our founding documents.

This is not to say that King didn’t have misjudgments or make mistakes, but his movement was created with clear goals, and with the inevitable end game of inclusion rather than division.

While certainly controversial in his own day, King aimed his demonstrations at bringing about the end goal of reconciling the races—a fulfillment of the original promise of our nation’s founding, which placed our republic upon the rock of natural human equality: the concept that all are created equal in the eyes of God.

As Professor Peter C. Myers wrote for The Heritage Foundation:

King extolled the promise that inhered in Lincoln’s momentous Proclamation and prior to that in “the magnificent words of the Constitution and the Declaration of Independence.” He confronted the nation with its failure to honor its promise of equal liberty for all, even as he implored his fellow protesters and all of his fellow citizens to understand that their destinies as Americans were indissolubly bound together.

In cases where King clashed with police, he accepted the penalty of unjust laws while decrying their aims, thereby respecting the ultimate rule of law and bringing attention to his cause at the same time.

It was an important step in changing American hearts and minds that ultimately led to the expansion of basic rights and protections to include groups that had traditionally been deprived of them.

In this, Kaepernick’s protest missed the mark.

The Castro regime, under which racism is rampant, operates a virtual police state that violently represses its citizens. Protests are cracked down on ruthlessly and dissent isn’t tolerated.

Malcolm X was, of course, a very different civil rights leader than MLK. He criticized non-violent protests as an ineffective tool and rejected the idea that unity and racial reconciliation were possible or desirable.

Some of King’s best ideas, over time, have become mainstream. While his legacy is often fiercely debated between the political left and the right, his appeal has become nearly universal.

Many on the left complain that King’s more egalitarian economic views are rejected on the right, while it’s fair to say that the “colorblind” views of his famed “I Have a Dream” speech might be considered offensive and triggering on a modern college campus, where the idea of racial colorblindness is problematic.

Nevertheless, King’s movement created a positive, lasting legacy for the United States as a whole.

Kaepernick’s movement, by contrast, has done little more than alienate football fans in droves and add to the perception that America is more divided than ever.