Dr. Deborah Birx, the coordinator of the White House task force on coronavirus, took a crack Wednesday at scientific models that have projected doomsday scenarios for the coronavirus pandemic, saying the estimates do not take into account adjustments made to stop the spread of the virus.

“I think the numbers that have been put out there are actually very frightening to people,” Birx said of some of the models that have projected that between 50% to 60% of the population could become infected. 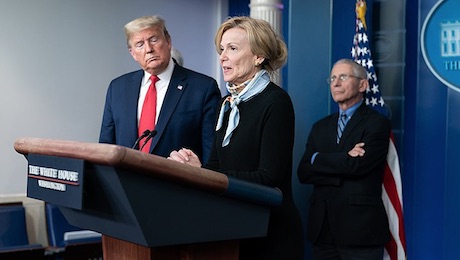 “On a model that you just run full out, you can get to those numbers if you have zero controls and you do nothing,” she added. “And we know that every American is doing something.”

The White House on March 16 issued guidelines to limit crowd sizes, avoid discretionary travel, and avoid restaurants, bars and other non-essential businesses. States and cities across the U.S. have closed schools and implemented their own so-called social distancing measures.

The effort is aimed at stopping the spread of coronavirus, which originated from Wuhan, China, in November 2019.

Models projected the spread of coronavirus have become a source of intense debate.

One model from Imperial College in the United Kingdom predicted that more than 80% of U.S. citizens would be infected, and 2.2 million would die over the course of 18 months if the public and government did not take mitigation steps.

The study garnered worldwide attention because of the massive number of projected deaths, though the researchers noted that the doomsday scenario was unlikely to happen because governments would take steps to slow the spread of the virus.

Neil Ferguson, the lead author on the study, lowered his estimate on Wednesday for the number of deaths projected for the U.K., citing mitigation steps that have already been taken in the West.

Birx also said the scenario is unlikely to play out in the United States because of social distancing measures that are being implemented across the country. But she also said coronavirus is likely to recur in multiple more cycles over the next year, and that officials are preparing for it.

“I want to be very clear, the only way that happens is if this virus remains continuously moving through populations in this cycle, in the fall cycle, and another cycle. So that’s through three cycles with nothing being done,” Birx said.

She said that recurring cycles of coronavirus may come in Fall 2020 and Spring 2021.

“We’re really dealing with the here and now, while we’re planning for the future.”

As of Thursday, nearly 70,000 Americans have tested positive for coronavirus. Of those, more than 1,000 have died.