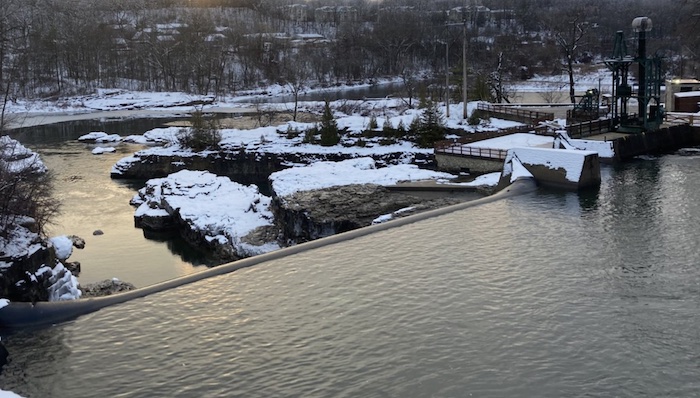 Salmon Hole Park spans forested trails along the Winooski River, including its namesake: part of the river promoted by the state Department of Fish and Wildlife as a famed fishing spot.

What visitors and aspiring anglers might not know is that the waterway flowing through these areas is part of Vermont’s list of impaired and threatened waters. Under the federal Clean Water Act, states list waters that don’t meet federal water quality standards. The waterway that includes the Salmon Hole and flows from the mouth of the Winooski River to the Winooski dam, is impaired for swimming and fishing — meaning officials advise against taking a dip or eating a set number of fish caught there.

The waterway is listed as impaired for fishing due to the presence of mercury in the tissues of fish. The chemical element’s presence in fish triggered a legal process requiring the state to draw up a pollution-reduction target. The Salmon Hole area has had one of those set since 2007, but officials have yet to reach it.

What about swimming? There aren’t often a lot of swimmers there, said Tim Larned, park superintendent of the Winooski Valley Park District, which Salmon Hole Park belongs to.

“But in the summertime, I think there is some swimming that goes on,” he said.

Yet, officials agree: E. coli, a disease-causing bacterium, enters the waterway from Burlington’s combined sewer overflows, according to state data. People swimming in the water could risk health problems as a result.

These systems collect sewage and stormwater into one pipe to be treated at a wastewater treatment facility and can be overwhelmed during heavy precipitation, causing some partially treated wastewater to be discharged into nearby waterways, said Karen Bates, local watershed coordinator for the Vermont Department of Environmental Conservation.

When it rains, everything from dog and pigeon waste can wash into the river, Bates said. Pavement also collects wastes and pollutants that get washed into the river instead of seeping into ground. The river “gets all the soup,” Bates said.

According to the Environmental Protection Agency, sewer systems like Burlington’s are a “priority water pollution concern for … approximately 700 municipalities across the U.S.”

What are the risks?

Federal officials say nearly all mercury exposure in the U.S. occurs through eating fish and shellfish that contain high levels of mercury in their tissue.

When mercury particles in the air settle in water or soil, they get absorbed in the organisms that live there. When larger fish eat other, smaller fish, the concentration of mercury increases, as does the threat of illness from consumption by people and animals.

So, the Vermont Department of Health has developed fish advisories that set limits on the portions and type of fish caught that can be eaten. Limits are stricter for people who are pregnant, nursing mothers and young children — groups more vulnerable to mercury’s health effects.

Mercury targets mainly the nervous system, kidney, liver, according to the EPA, and is almost completely absorbed into the blood and all the bodies’ tissues — including the brain. And mercury can remain and accumulate over time, causing more severe effects. Children exposed are more likely to be born with early development issues, such as impaired cognition, memory, attention, language, fine-motor skills and visual-spatial skills.

Some of the associated symptoms include a lack of coordination, difficulty hearing and speaking, muscle weakness, worsening vision, nerve loss or tingling in the hands, feet, and around the mouth. High amounts of mercury can also lead to the development of long-term and sometimes permanent neurological changes, and it can be fatal.

E. coli, a bacterium commonly found in the intensities and fecal matter of animals, can cause nausea, vomiting, abdominal cramps, diarrhea and bloody stool that can end up being fatal. Those symptoms are tied to swimming, according to federal data: the EPA reports that 3.5 million people per year experience symptoms of diarrhea and vomiting after splashing in natural water bodies that have harmful bacteria and pollution.

E. coli has been linked to beach closures. Pets are not immune to waterborne illnesses. In 2019, two dogs in Stowe died from contaminated water, although E. coli was not the cause.

How do residents find information about their local waterway so they can enjoy the outdoors safely?

The answer is more complicated than many might think. Watershed management involves many factors from many sources — think sewage outputs, individual pollution, different regulatory jurisdictions — and details are buried in disparate databases, reports and other resources.

To find waterways that may be impaired for certain uses in your hometown, you can look at the Vermont Natural Resource Atlas, a mapping tool that has many layers of Vermont data, including impaired waterways.

The sources of pollution that flow into the watershed vary depending on their location and different land uses, which makes preventing harmful contaminants from entering the water more complex.

“You’ve got agriculture, you’ve got urban, streets and roads, residential areas and suburban areas, and you’ve got forest activity where you might have several cultural activities or roads through the forests for the trucks that are grabbing the trees,” Bates said.

Currently it appears there aren’t any ongoing restoration efforts specifically targeting this section of the Winooski River. But Bates said there is a lot of work around stormwater management that can help the health of the waterway by reducing the level of harmful bacteria like E. coli entering it.

Bates said the state is working with municipal wastewater treatment facilities to disconnect these old stormwater pipes from sewer lines to stop what is running off the streets from going into the wastewater treatment facility. And the Department of Environmental Conservation has been developing a new organization to focus on identifying projects to fund that could address stormwater runoff like that.

Mercury in fish is a hard problem to pin down. A 2007 plan written by the Vermont Department of Environmental Conservation with their counterparts in other northeastern states said 75% of mercury found in the environment is from worldwide human-related activities, specifically burning coal and other fossil fuels.

This makes the issue much harder to tackle at the local level. According to state statutes on mercury management, even though several state agencies had undertaken a long-term effort to monitor and report on fish tissue mercury in Vermont, most lakes and streams remained untested.

“Of the 560 lakes and ponds tracked by the Department of Environmental Conservation, only 60 of the largest have been monitored for fish mercury,” the law says. So, officials advise people to assume all waters are guilty until proven innocent.

“All of Lake Champlain and most of Vermont has a fish advisory … because of the mercury that exists in the air that then becomes part of our soils and waters and plants,” said Bates, the area watershed coordinator.

She added: “It’s a problem we have to deal with on a national level.”

One thought on “What’s up with the water at the Winooski River Salmon Hole?”