When Jake Hill heard that an atheist activist group had sued to have a historic World War I memorial pulled down because some people were offended by the monument’s Christian symbolism, the Marine got angry.

“Americans of all faith backgrounds should be outraged,” Hill, a lance corporal in the Marine Corps, said.

Hill, of Madison, Wisconsin, was awarded the Silver Star during the Afghanistan War for his valor in leading his squad through enemy fire in 2010 to rescue a wounded fellow Marine. He also received a Purple Heart after being wounded in action during his service from 2008 to 2013.

But back home, another battle is brewing at the Supreme Court. Hill sees the latest effort to remove the 40-foot-tall Peace Cross in Bladensburg, Maryland, as one more step in a long war against religious liberty in America.

“Where will this end?” Hill, 28, asked in an email to The Daily Signal. “Will they begin chiseling the crosses and stars of David off gravestones in Arlington [National Cemetery] next?” 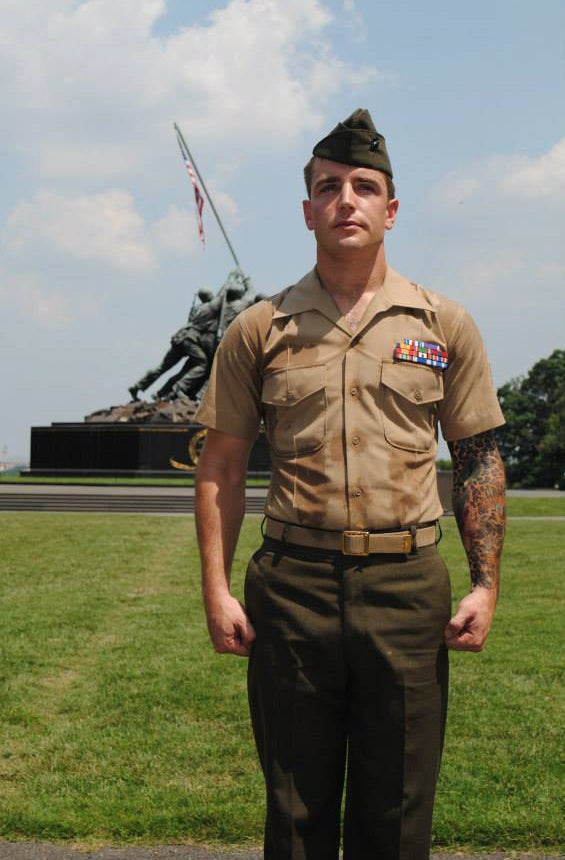 “Will they begin chiseling the crosses and stars of David off gravestones in Arlington?” asks Jake Hill, pictured during his service as a Marine. (Photo courtesy of Jake Hill)

Another Marine Corps veteran told The Daily Signal that he would not find a broad Supreme Court ruling against religious-themed memorials appealing.

“I hope that in the future, a revisionist will not take such liberties with my generation’s legacy—or see such a harmless and sincere profession of faith and remembrance as an attack,” Matthew Collins, now a veterans advocate, said.

Collins, 43, a native of Falls Church, Virginia, joined the Marines in 1998 and retired with the rank of captain in 2009. He deployed to Afghanistan, Bahrain, and Sierra Leone and served aboard the amphibious assault ship USS Wasp in the Middle East after the Sept. 11 attacks. He later saw combat while embedded with the British army in the Afghanistan’s Helmand province as a Defense Department civilian from 2013 to 2014.

The Supreme Court announced Nov. 2 that it will hear the case of the Peace Cross, which stands in the town of Bladensburg not far from the nation’s capital. The high court previously had delayed deciding whether to take the case, The Washington Times reported.

The cross-shaped memorial lists the names of 49 men from Prince George’s County, Maryland, who perished in World War I, which ended 100 years ago Sunday. It stands on land owned by the Maryland-National Capital Park and Planning Commission, a government agency created by the state of Maryland.

The 93-year-old Peace Cross in Bladensburg, Maryland, is a dignified expression of gratitude to those who gave their lives for America. Its fate is now with the Supreme Court. Americans should have the freedom to honor war heroes according to their beliefs. pic.twitter.com/KGg92VPS6f

The Peace Cross, constructed between 1919 and 1925, stood for more than eight decades without incident.

In 2014, though, the American Humanist Association, an activist group focused on “defense of civil liberties and secular governance,” sued to have the memorial removed from public land. The group argued that government maintenance of the monument violated the First Amendment because the cross is a well-known Christian symbol.

The suit names as defendants the Park and Planning Commission and the American Legion, the country’s largest veterans service association, which originally helped fund construction of the monument.

“The nearly 2 million members of the American Legion are rather bothered by the fact that our opponents want to erase the sacrifices of the 49 brave men who gave up their lives for Prince George’s County, Maryland,” said Jeremy Dys, deputy general counsel for First Liberty Institute, which represents the veterans organization in the case.

First Liberty Institute bills itself as the “the largest legal organization in the nation dedicated exclusively to protecting religious liberty.”

“We have to remember what has been done in the past in order to guide us going forward,” Wright said. “Those who have fought for our country, whether they survived combat or not, should be honored.”

Wright said his organization endorses over two-thirds of the 55,000 military chaplains who serve in the U.S. armed forces and works to ensure that all who serve in the military may “exercise their religious faith without punishment or fear.”

Three residents of Prince George’s County joined the American Humanist Association’s lawsuit, saying they were “offended” by what they perceived to be the monument’s Christian symbolism, according to court documents.

They can go to their ‘safe places’ and think what they want to think.

It’s a shame that they feel that way. If you carry that to the extreme, that prevents freedom of expression and other rights of the First Amendment. It’s fortunate that [such rights] are defended.

Their position is one of outright hostility to religious faith in this country. It ignores the history of this country, it ignores the brave things service members have done and ought to be remembered for. 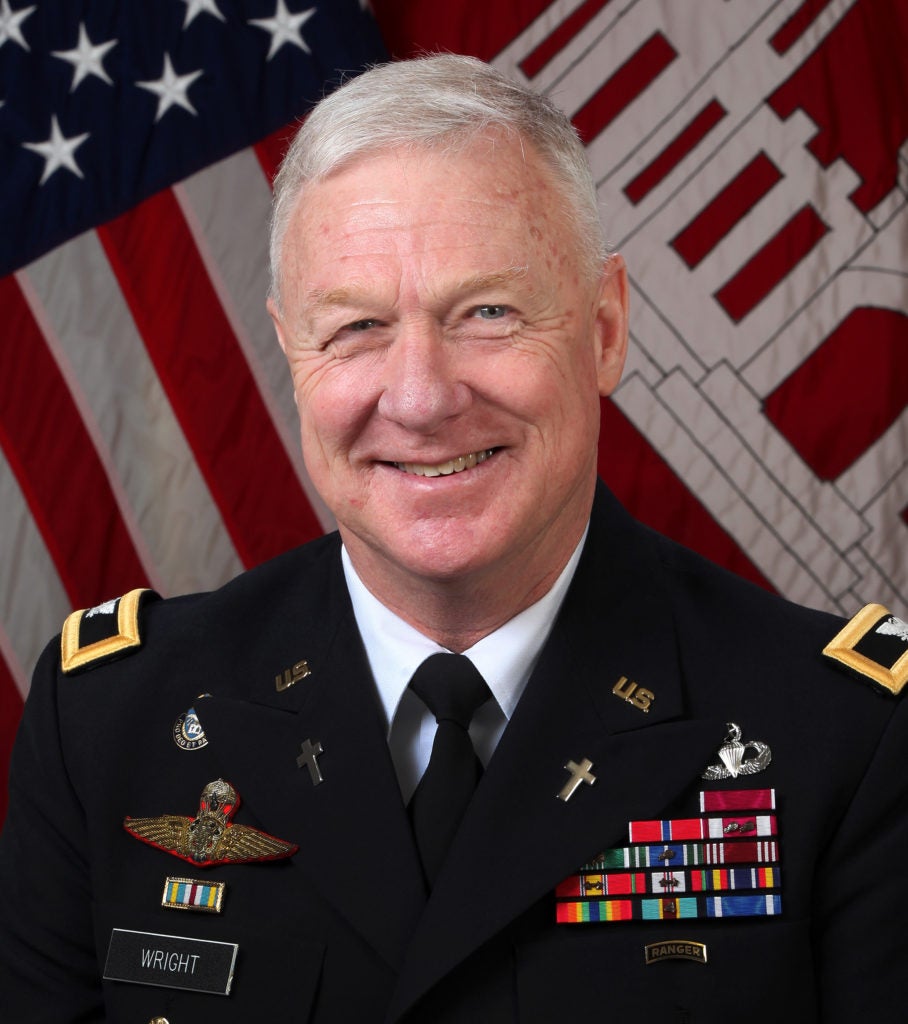 The American Humanist Association’s position on the Peace Cross “is one of outright hostility to religious faith in this country,” says retired Army Col. Phillip F. Wright, executive director of Chaplain Alliance for Religious Liberty. (Photo courtesy of Phillip Wright)

If the Supreme Court rules that cross-shaped memorials are unconstitutional, Wright said, “it would prevent any organization form remembering or acknowledging important aspects of our country’s history, simply because it involves the use of religious symbols.”

But the American Humanist Association takes issue with what the monument represents, not just how individuals feel about it, spokeswoman Sarah Henry told The Daily Signal in a phone interview.

“It really demonstrates or gives the impression that Bladensburg is some kind of Christian enclave, which is not the case,” she said. “There are non-Christian members of the community.”

Henry, a graduate student who is not a veteran, said the Peace Cross is also problematic because of its central location in Bladensburg, which makes it “unavoidable.”

Her group also takes issue with the appearance of the monument.

Beginning in 1927, the state of Maryland empowered the Park and Planning Commission to acquire, develop, maintain, and administer a regional system of parks in Montgomery and Prince George’s counties, and to do land-use planning for the adjoining counties.

The location of the monument on public land is a major problem in and of itself, Henry said, because a Christian cross owned and maintained by a government agency constitutes government endorsement of a specific religious faith in violation of the First Amendment.

All this, Henry said, makes for an “excessive entanglement with religion.”

“At this point, applicable precedent strongly supports our legal position and we look forward to arguing before the court,” Henry told The Daily Signal.

Wright said he sees the situation in a different light.

The Establishment Clause of the First Amendment, he told The Daily Signal, “doesn’t prohibit mention or use of religious objects, or words, or signage.”

“If it did, wherever you had religious signage—every cemetery in the U.S., including Arlington National Cemetery—would be unconstitutional.”

The Constitution’s Establishment Clause prohibits the federal government from making any law “respecting an establishment of religion,” meaning it cannot establish an official religion, favor any one religion, or prefer religion over lack of religion and vice versa.

“I think it’s a reach to say that this is a First Amendment violation of the separation of church and state,” Mike Moore, an Army veteran who lives in Lanham, Maryland, told The Daily Signal in a phone interview.

“There are lots of things in the form of a cross which are not necessarily expressions of religion,” Moore said. “There’s all kinds of servicemen’s medals in the form of the cross that have no religious connotation to them.”

Moore, 73, served in the Army from 1968 through 1972, attaining the rank of first lieutenant. He was primarily stationed in the U.S. and Germany.

A lower court originally ruled against the American Humanist Association in the Peace Cross case, but a three-judge panel of the 4th U.S. Circuit Court of Appeals ruled in October 2017 that the memorial was unconstitutional.

In a 2-1 decision, the panel ruled that the cross is “the core symbol of Christianity” and that a “reasonable observer” would conclude the Peace Cross to be an endorsement of the Christian religion.

“It [the cross] is 40 feet tall; prominently displayed in the center of one of the busiest intersections in Prince George’s County, Maryland; and maintained with thousands of dollars in government funds,” Judge Stephanie D. Thacker wrote for the court. “Therefore, we hold that the purported war memorial breaches the ‘wall of separation between Church and State.’”

Thacker and another judge on the appeals panel were appointed by President Barack Obama.

The lower court had found that the memorial’s design was modeled after World War I memorials in Europe and was meant to commemorate war dead, not endorse any one religion or coerce anyone to believe in a religion, according to the panel’s 48-page ruling.

The Maryland Historical Trust website contains a description of the Peace Cross as “historically significant for its association with the nationwide trend to erect community memorials to fallen soldiers after World War I.”

“It is significant as an expression of the postwar era’s shared perception of the noble character and valor of the veterans and their cause,” the description says.

“Just because the memorial mimics the cross-shaped markers of European memorials does not mean the Establishment Clause has been violated,” First Liberty Institute’s Dys, who is not a veteran, told The Daily Signal.

Members of the American Legion “understand … that Gold Star Mothers, the group that funded this monument, chose this specific way to honor the fallen,” Dys said.

“Back in 1919, Gold Star Mothers and the American Legion erected what one mother called her son’s gravestone,” he said of the Peace Cross.

Gold Star Mothers are women whose sons or daughters die while serving in the armed forces in wartime.

“The concern I have is that the 4th Circuit judges said that we could either tear the cross down or take the arms off it so it doesn’t look like a cross, which is ridiculous,” Moore, the Army veteran, said.

The Park and Planning Commission could sell the cross back to the American Legion, Moore said, but he prefers that the Supreme Court create case law to stop the American Humanist Association and other groups from suing to remove war memorials.

First Liberty’s Dys said that if the Supreme Court were to find the Peace Cross in Bladensburg unconstitutional, many other similarly shaped memorials on public land could be in danger of removal.

The American Legion’s members know that if the American Humanist Association is able to “destroy” this monument, “this means a bulldozer will be able to knock down thousands of memorials like this one across the country,” he said.

“As a veteran and former active-duty serviceman, remembering what they have done is important,” Wright said of those who died in war. “It’s their shoulders we stand on.”

But Henry denied that the American Humanist Association is attempting to erase history, or prevent the honoring of war dead. She said her group would support efforts to reshape the monument or to transfer its ownership to a nongovernmental entity.

“The American Humanist Association fully endorses a war memorial that is inclusive of all veterans,” she said. “We believe, of course, that anyone who has served our country with bravery is worthy of veneration.”

The recent addition of Justice Brett Kavanaugh means the Supreme Court has a 5-4 conservative majority.

“We are certainly encouraged by it,” Dys said of Kavanaugh’s participation in the case. “The Supreme Court is the last hope for preserving … the memorial.”