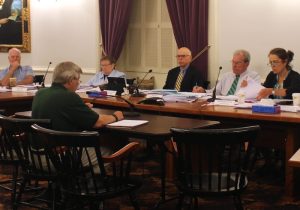 Energize Vermont Board President Mark Whitworth testifies before the Legislative Committee on Administrative Rules at the Statehouse.

Act 174, enacted in 2016, required Vermont’s Public Service Board to develop a new rule for wind turbine siting and operation. The PSB’s proposed rule includes noise limits and a setback of 10 times turbine height. The Legislative Committee on Administrative Rules (LCAR) is evaluating the PSB’s proposal to determine if the rule was developed properly and is consistent with legislative intent.

The wind industry doesn’t like the proposed rules and is lobbying LCAR members to reject the rule or require the PSB to weaken it. The lobbying campaign appears to be working; it shows the influence that the industry has over some LCAR members.

The Legislative Committee on Administrative Rules met on June 22, 2017. Here is the text of remarks delivered to LCAR by Energize Vermont Board President, Mark Whitworth:

I want to thank the chairman and committee members for this opportunity to speak here today.

It is a coincidence that Boys State is being held at the State House today. Yesterday I learned that the coincidence doesn’t end there. While we are discussing wind turbines here, the Boys State Legislature will be considering legislation to restrict high elevation wind energy development that would affect Vermont’s vital brook trout habitat. As a fisherman, I hope that our elected Legislature will take a cue from some of our brightest high school juniors.

Boys State notwithstanding, the outlook for wind energy in Vermont is grim. And that’s not because of any new PSB rules. It’s because the wind industry has a terrible reputation—a terrible reputation that it has earned by promoting poorly-sited projects and operating those projects irresponsibly.

They have been so greedy that they have chosen to operate even when it placed them out of compliance and put their neighbors at risk. The PSB’s penalties for non-compliance have been so insignificant that they are just a cost of doing business. As the Department of Public Service noted in a recent filing, it is well worth violating the rules.

The wind industry may be the most corrupting influence at work in Vermont today. This is not lost upon the Vermonters who have witnessed the industry’s vote-buying schemes in Essex and Windham Counties and the money that the industry pours into political campaigns and lobbying. This includes lobbying by Vermont’s old-line environmental groups that appear to now favor energy development in ecologically fragile areas.

Governor Shumlin suggested that we should learn from our experiences at existing wind plants. Vermonters have learned a lot about wind—they have learned that Big Wind is a bad neighbor.

The Legislature has learned that there are problems—that’s why Act 174 had such broad support. It was the Legislature’s intent to fix the problems that turbine neighbors had reported by directing the Public Service Board to develop new siting and operating rules for wind turbines.

While Vermonters and their legislators have learned a lot, it seems that the wind industry has learned little. It is fighting to remove all meaningful restrictions on turbine siting and operation. Developers want to build projects wherever they want and run them however they want. The multi-billion dollar industry would like you legislators to help out by weakening health and safety regulations. The industry would like you to help out by joining them in their denial that turbine noise is a problem for people—despite what you have learned about the neighbors of existing projects. The industry wants you to buy into the pretext that they are combatting climate change while they degrade our defenses against its impacts.

The industry claims that the proposed PSB rule is arbitrary. The proposed rule is far from perfect, but it is not arbitrary.

PSB documents show that the rule’s starting point was the World Health Organization’s recommendation that indoor nighttime noise not exceed 30 decibels. All of the rule’s provisions were developed around the idea that turbine noise should not exceed a 30 decibel average in any home at night.

Taken by themselves, the proposed rule’s noise provisions fail to meet the Legislature’s intent to strengthen health and safety protections for Vermonters. Not only are the provisions weaker than existing limits, but the wind industry has become adept at gaming on noise monitoring and modeling.

But, the PSB included turbine setbacks. The setbacks are the one element in the new rule that the industry cannot game. Their inclusion is what enables the rule to meet legislative intent. Since the industry can’t game the setbacks, they will do whatever it takes to get rid of them.

The industry has called the rule unprecedented and says that it creates a ban on wind. This so-called ban motivates the industry claim that the rule is inconsistent with the intent of past legislation.

The Cape Cod setback requirement may have been motivated by experience with the two poorly-sited 400-foot turbines in Falmouth. This past Tuesday, a court ordered the turbines, which have been determined to be a nuisance, to be shut down.

Authorities in Massachusetts did the wind industry no favors by implementing weak regulations. The weak regulations resulted in a multimillion dollar investment that is a nuisance and now must be shut down. What about the industry claims that the noise limits are unprecedented? As I have already mentioned, the noise limits that the PSB imposed upon wind plants in Sheffield, Lowell, and Georgia Mountain are stricter than the new proposed noise limit.

The wind programs in Denmark and Germany may owe their success to their emphasis on community ownership and management. In Vermont, wind developers throw the word “community” around pretty casually.

I challenge you to find any community in Vermont that would welcome a Sheffield, Lowell, or Georgia Mountain style project. Vermonters have learned far too much to be fooled again. That’s why every project currently proposed in Vermont is opposed by the targeted town as well as the town’s regional planning commission.

How many merchant wind developers will want to take on the expense of fighting neighbors, towns, and regional planning commissions for small projects? Does that mean that they will propose only large projects that justify an expensive legal fight? That would mean that wind cannot play a part in meeting the targets for small, distributed generation in Tier 2 of Act 56.

It is time for us to learn from Denmark and Germany. If wind is to play a significant part in Vermont’s energy future, it will be because communities choose it. Communities are far more likely to choose wind if they plan it, own it, and manage it. The PSB has allowed for this in the proposed rule by allowing community members the flexibility to define setback and noise standards that meet local sensibilities.

The rule proposed by the PSB is not perfect, but it meets all of the criteria that this committee is required to consider. Energize Vermont urges you to approve it as proposed.