These are confusing times. We are endlessly bombarded with conflicting information and flagrant misinformation from all sources. The cancel culture warriors are in full cry and are tirelessly working at re-writing our national history. None of our great icons are safe. Too much of our mass media is dedicated to fake news. The major social communication platforms are dedicated to silencing viewpoints that a few top executives deem unsuitable. There are calls to treat conservatives, MAGA supporters in particular, as cult members that need to be deprogrammed for the good of society. It doesn’t matter which level of government is involved — a lot of proposed legislation and other programs are suspect on their face.

To create order from this confusion, to determine what is nonsense, to detect gaslighting and decide what is valid, we need to revisit three classic sources. These re-reads will remind us that we are capable as individuals of sorting out what is good for us and what is being foisted on us by the masters of group think. 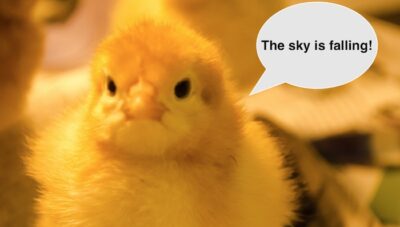 As of 2021, the the global warming climate crisis fits the ‘sky is falling’ model. From Al Gore to the Swedish teenager to the green new dealers, we have been told for 20 years that our civilization is doomed.

First, consider the “Chicken Little” story. A foolish hen is hit on the head by a falling acorn and concludes that the sky is falling. She races around the farm spreading this information until a mass panic is created. At some point another creature figures out that the whole thing is not true, and order returns. As of 2021, the the global warming climate crisis fits the ‘sky is falling’ model. From Al Gore to the Swedish teenager to the green new dealers, we have been told for 20 years that our civilization is doomed. The oceans were supposed to rise and flood our coastal cities and re-shape our coastlines. Our air was predicted to be so polluted that we would be choking to death. The temperature was supposed to rise enough to destroy our ability to grow food for the population. None of the above has happened. What has happened is that a lot of panic driven public policies and harmful legislation has been passed.

The second key read is the fable of “The Emperor’s New Clothes.” This is the original example of a fake news story leading to the defrauding of a whole population by skillful con-artists. Not only is the weak-minded ruler convinced that his non-existent new clothes are fabulous, but his loyal subjects all buy into the con rather than run the risk of not being woke enough to see what isn’t there. After two years and millions of dollars spent on the search, no Russian collusion by our president was found. Impeachment followed anyway. The Paris Climate Accords were praised as a planet saving device, even though China was declared to be a developing country and is not expected to even set any target goals for eliminating pollution until 2030. What kind of mental gymnastics regards the only economic system on the planet that rivals the U.S. as “developing”? China leads the planet in terms of emitting industrial pollution. Ten months of almost daily rioting and looting in Portland was declared to a “peaceful demonstration.” The solution advocated in most big-cities to deal with urban lawlessness was to restore order by defunding police departments.

Now for the most important item on our study list. Get a book of “Dot to Dot” puzzles. Pick one out that is somewhat challenging, one that you need to pay attention to in order to work out the whole picture. Becoming skillful at connecting the dots will help you spot any scam. Learn to look at each dot to see how it got there and where the next dot will lead. We are told that electricity must replace fossil fuels to save the environment. We are not told what fuel will power the generating plants. Solar and wind power sound good, but in reality they have inherent problems that are glossed over by those who want to sell them to us. The Keystone Pipeline is on hold again.

Pipelines are the safest, cleanest and least expensive method of transporting fuel. The greatest opponents of building pipelines are not environmentalists. Leading the charge against pipelines are the railroad and trucking interests that are much more accident prone and costly than pipelines. If forgiving college loan debt is a good thing to do, does the same logic apply to business loans and home mortgages?

The questions are almost endless, but they all have answers. Our task is to take charge of our own thought processes. Is the sky falling? Do we really believe that our leaders are giving us the truth when they reassure us that newly unemployed workers will all be re-hired at equal paying jobs? We have no choice but to stop listening to the spin-miesters and connect the dots ourselves to see the real picture.

11 thoughts on “Weiland Ross: An adult reading list for spotting disinformation and gaslighting”