Burlington High School has been in session in the old Macy’s building near the Church Street Marketplace since March, challenging school leaders and students alike to adapt to their new location. Some students meeting with Welch admitted their discomfort with this new campus, but said they ultimately accepted the situation. 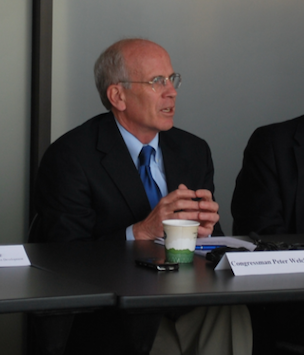 “As I look around, we need a new school for the kids. The situation you have is extreme,” he said to those gathered for his visit.

In detailing his experiences in Washington, Vermont’s lone congressman expressed optimism for passing the landmark legislation awaiting action in Congress. He stressed that a lot of work has gone into reaching an agreement on both sides.

Congressman Peter Welch on a break from Washington D.C. visits with high school students and staff in Burlington to share his optimism that federal funding could become available for school construction projects. Burlington needs to replace its high school after BHS was closed do to extensive contamination from PCBs. Photo by Abbie Kopelowitz
“A lot of us in Congress are trying to get money from the federal government to help out, not to pay for the whole pie, but to help out,” he said.

Through negotiations, the cost of the package has gone from $3.5 to $1.75 trillion. Welch said he is trying to get some of this money back to help with school infrastructure, arguing that federal investment is necessary to relieve local tax burdens.

“It’s actually not only affordable, but doable,” Welch says, “We spent 8 trillion dollars on three wars in the Middle East. Maybe we ought to find a little money for school construction.”

Democratic leaders believe that an initial vote on these spending bills could happen as soon as this week.

In Vermont, the state more than a decade ago ended its practice to contribute funding to local school construction projects. That has left districts on their own to address infrastructure projects to maintain and update aging school facilities. A study in 2019 found more than $500 million in public school renovations and upgrades needed across the state.