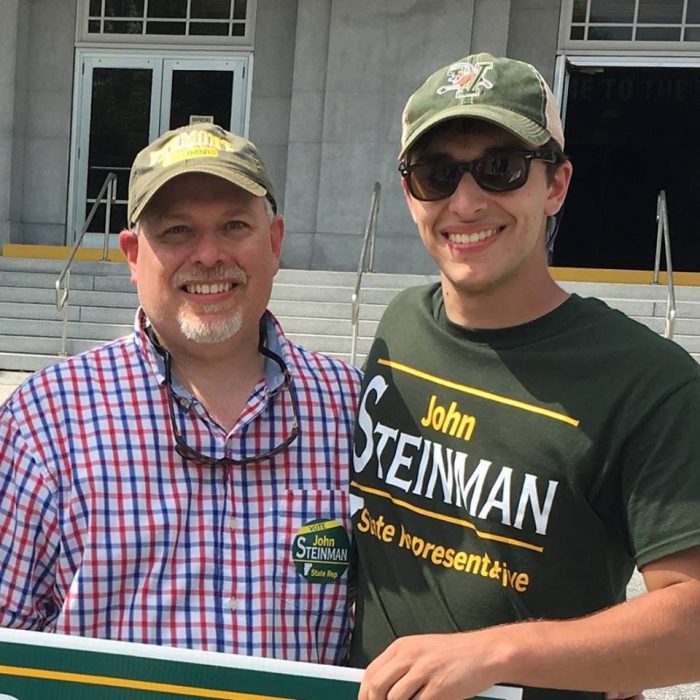 LONE REPUBLICAN: GOP challenger John Steinman of Barre City, left, is running for a House seat in Washington District-3, where a Democrat and independent currently occupy the two seats. With him is his son Jeff Steinman.

Republican John Steinman of Barre City sees an opportunity to win in the Washington-3 House district, which could help strengthen the GOP’s ability to sustain vetoes if Phil Scott remains governor.

A win could prove crucial because in the House chamber there is currently a delicate balance — about a 35/65 percent split — between the major parties, which barely allows Republicans to support Gov. Phil Scott in critical veto-related votes.

There are two seats up for grabs in the district. In the 2016 general election, incumbents Tommy Walz, a Democrat, Paul Poirier, an independent, won 26 and 24 percent of the vote respectively. However, not far behind was then challenger Karen Lauzon, a Republican, with 22 percent.

As the lone Republican challenger, Steinman sticks close to the essential Vermont GOP talking points, which are affordability and taxes.

“It’s everything,” Steinman told True North in an interview.

Steinman shared a number of personal stories that spell bad news for the state’s economy, such as having a friend move away to Tennessee to avoid the rising costs of living.

“Tennessee is a very attractive place for business and taxes,” he said. “They have a different outlook on everything.”

He noted that many of Barre’s local granite quarries have closed down over the last 25 years.

“All the good paying jobs went with it,” he said.

He also said another sign of trouble is Moody’s bond rating downgrade for Vermont, which went from AAA to Aa1. The move, which is largely attributed to debt associated with public employees’ retirement commitments, is estimated to cost the state an additional $100,000 per $1 million borrowed.

Progressives and many Democrats continue to promote a $15 minimum wage, but Steinman said he opposes the hike because it would hurt businesses.

On Act 46, the state’s school district consolidation law, he said the City of Barre and Town of Barre are working to eliminate redundant board positions, but otherwise most efficiencies have been achieved already through the existing supervisory union structure.

He added that he doesn’t feel comfortable forcing schools elsewhere in the state to merge against the will of the community.

On the health care front, Steinman is an orthodontist who runs his own business. He said “dealing with insurance companies is painful,” and he said the state should not be penalizing Vermonters who cannot afford insurance.

Poirier will be a tough incumbent to beat. He’s one of the most experienced public representatives in the House chamber. Starting in the early 1980s, he has served 10 terms for the Barre City Council and another 11 terms in the Vermont House.

Poirier used to be a Democrat before switching over to independent in 2009. He said the partisan nature of the two major parties became too burdensome. He also has served as the House majority leader in the past.

“I just saw what has gone on — the supermajority just ignoring the Progressives and the Republicans,” he said.

Unlike Steinman, Poirier thinks the minimum wage needs to be raised to $15 within three years. He said critics are quick to point out the costs of the wage bump, but he says there will be savings too, such as getting employees off of costly social programs.

“We’re keeping people at a level that makes them dependent on benefits,” he said.

He added that businesses small and large saw savings last year via the federal tax cuts, so there should be a little extra money to go around.

Poirier said while the Barre City community has “always been a Democratic-leaning community,” he also called it “conservative” in the sense that residents are blue-collar types who are thoughtful about policies.

Also running in the district is Democrat Peter Anthony.