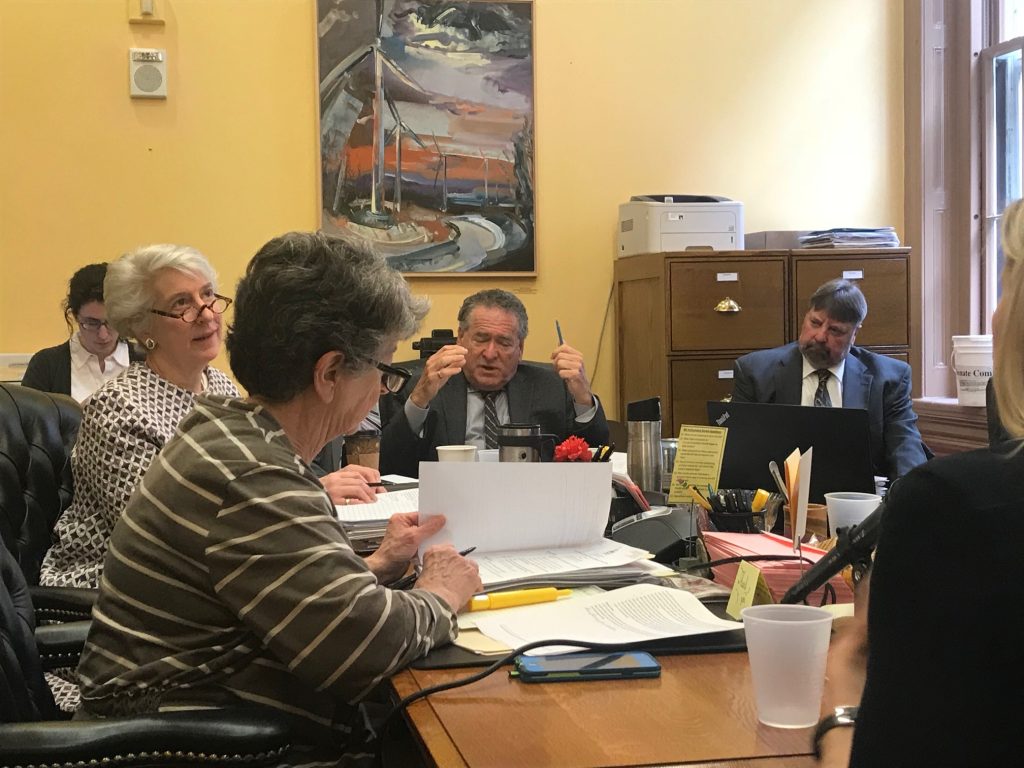 MANDATORY OR VOLUNTARY?: Sen. Michael Sirotkin, D-Chittenden, chair of the Senate Development, Housing, and General Affairs Committee talks with business experts about whether paid family leave should be a mandatory program.

MONTPELIER — The Senate Development, Housing, and General Affairs Committee on Thursday heard from three more witnesses regarding paid family leave, and two of them urged lawmakers not to make the program mandatory.

Erin Sigrist, president of the Vermont Retail & Grocers Association, said the vast majority of her members want a paid leave benefit to be voluntary.

The Vermont Retail & Grocers Association represents over 750 businesses including general retail, grocery stores, convenience stores, food producers and more. Sigrist said 85 percent of them are what would be considered a small business with 20 employees or less. These are the businesses that struggle the most if a paid leave benefit is mandated by the state.

“Small businesses across the state, as we have heard, are facing a shaky landscape; operating on finite margins has become an industry norm,” she said. “The average margin for a small grocery store hovers right around 2 percent and it’s only slightly higher for a general retail store.”

Businesses would offer the benefit if they could afford to, Sigrist added, but most will need their employees to cover the cost.

“We believe that if the quoted ’70 percent of Vermonters support the creation of a paid leave program’ is true, then obviously there are 70 percent that would opt in or not opt out. We think that’s a substantial number that should have some weight,” she said.

Noting that Vermont is looking at more than  $70 million in new taxes if H.107 is enacted, Sigrist recommended a voluntary program with possibly 12 weeks of child bonding and six weeks for family or personal care needs.

Tanya Byker, an economics professor at Middlebury College, told the committee she thinks a paid leave program should be mandatory across the entire workforce.

“The problem is, if an insurance program becomes voluntary, people who know that they are at low risk find a policy that was fair and average to be too expensive to be worth it, and they pass. The high-risk people will see these policies as a really good deal and buy it,” she said.

Byker said the benefit will become more expensive if some workers are allowed to opt out of the system.

“Now the insurance company that based its original calculation based on everyone buying a policy is in trouble, now the company has to reassess its situation,” she said.

According to one study Byker cited, if the pool of beneficiaries drops from 100 percent of all workers to 70 percent, premiums would be 1.3 to 1.6 times higher.

Moreover, she spoke against Gov. Phil Scott’s initiative to create a voluntary paid leave program in conjunction with New Hampshire.

“I’m concerned about the risks of tying the insurance pool to New Hampshire state workers as proposed by that plan,” she said. “What if a similar bill doesn’t pass in the state or it is amended and the pool gets much smaller?”

Bard Hill, policy and planning director for the Department of Disabilities, Aging & Independent Living, warned that his industry is sensitive to new expenses.

“It’s demonstrably true that more than half the nursing homes in Vermont are currently running deficits,” he said. “If they have to take on any additional labor costs, then that will increase their deficit or some of them may go out of business.”

Sen. Randy Brock, R-Franklin, noted that many people who would be paying into the program would never receive any benefit because of how the bill is written.

“You are talking here, at least based on the tax department’s numbers, I believe about 60,000 people out of like 325,000 — that’s 18 percent. That’s almost 1 in 5 workers who are paying into this system as it’s designed right now who will get no benefit from it.”