Vermont Tax Commissioner Kaj Samsom: “It is no coincidence that when my department analyzed where high-income Vermonters are moving to when they leave the state, almost half of them move to states with no income tax or estate tax.”

Much like the 1970s Ringo Starr and George Harrison duet pop song “It Don’t Come Easy,” if you’re a full-time Vermonter you will have to pay your dues if you want to sing the tax blues in the Green Mountain State.

Just in time for the April 15 tax-filing deadline, a new online report shows that Vermonters have a lot of reasons to sing the blues: They have one of the nation’s highest state tax loads to bear.

A new report by WalletHub shows that Vermont has the fourth highest overall tax burden and second highest property tax burden among the 50 states.

The popular personal finance website released its 2019 Tax Burden by State report this month, and it doesn’t show Vermont in a very good light. Only New York, Hawaii and Maine are worse tax-burden offenders when compared to Vermont.

According to Jill Gonzalez, a WalletHub analyst who helped prepare the new report, Vermont has the fourth highest overall tax burden, at 10.77 percent. Property taxes make up almost half of this percentage. Vermont’s property tax burden is listed as 5.12 percent in the report.

Sales taxes take up close to a third of the tax burden, while income taxes represent 2.31 percent of each resident’s personal income.

To find out which states tax residents most aggressively, Gonzalez told True North that WalletHub compared the 50 states based on property taxes, individual income taxes and sales and excise taxes — as a share of total personal income.

Gonzalez said a simple ratio known as the “tax burden” is easier for the public to understand compared to tax rates. 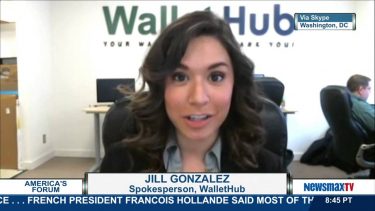 WalletHub’s Jill Gonzalez: “Tax rates vary widely based on an individual’s circumstances, the tax burden measures the proportion of total personal income that residents pay toward state and local taxes. And it isn’t uniform across the U.S., either.”

Data used to create the  WalletHub ranking were collected from the Urban-Brookings Tax Policy Center of Washington D.C..

“Tax rates vary widely based on an individual’s circumstances, the tax burden measures the proportion of total personal income that residents pay toward state and local taxes. And it isn’t uniform across the U.S., either,” Gonzalez noted.

According to the online report, with rankings showing 1 as the highest and 25 as the 50-state average, Vermont scored fourth in overall tax burden, second in property tax burden, and twenty-sixth in the individual income and sales and excise tax burdens.

According to Andrew Felo, associate professor of accounting at Nova Southeastern University’s Huizenga College of Business and Entrepreneurship in Davie, Florida, and an expert contributor to WalletHub, how a state measures up in the “tax burden” category is an indicator of a state’s economic and labor vitality.

While not discussed in the report, states with the highest tax burdens are by-and-large controlled by Democratic state majorities in their respective state houses.

Vermont Commissioner of Taxes Kaj Samsom said the report has a ring of truth to it.

“The conclusion by WalletHub is consistent with many different rankings I have seen over the years related to our tax burden in Vermont, not to mention what we hear consistently from taxpayers and tax advisors,” Samsom told True North. “It is no coincidence that when my department analyzed where high-income Vermonters are moving to when they leave the state, almost half of them move to states with no income tax or estate tax [there are only six states that meet this criteria]. It underscores the importance of the Gov. Scott’s focus on economic growth and affordability.”

Samsom said the Scott administration is working hard with the Democratic-controlled legislature to reverse the state’s dismal ranking.

“This year the governor introduced the repeal of the Vermont land gains tax and an increase in the estate tax exemption. Both proposals are aimed at lowering the overall tax burden and removing taxes that seem counterproductive to affordability and economic growth,” Samsom said.

While he agreed with the WalletHub report’s overall data, Samsom had one concern.

“I may follow up further with one point on the property tax burden WalletHub reports. [5.12 percent] seems high and likely ignores our income sensitivity program, which effectively keeps property taxes at or below around 3 percent of income for almost 70 percent of Vermonters.”

Felo stressed that states with a broad-based tax system are better at weathering economic storms compared to those, like Vermont, with a narrow-based system.

Images courtesy of Flickr/401kcalculator.org, State of Vermont and YourTube image