At least in some scenarios Vermonters could end up being presumed to have COVID-19 if they refuse to take the PCR test, the state’s secretary of Human Services said last week at a governor’s press conference.

“EPI [Elder Protection Initiative] has decided that, based on interview information, sometimes when people refuse testing it presumes they are positive,” Mike Smith said during an update on the testing operations in the state for the virus. “This is being done for two reasons: one for transparency, especially as the use of antigen tests become more widely used, and two, to be in line with other states.”

Smith suggested that the counting of presumptive cases will impact the data reported to the public on COVID statistics.

“We will begin presenting the number of probable cases asymptomatic or exposed people with those antigen tests that aren’t PCR-confirmed,” he said. There will be another 120 “presumptive positives” inserted into Vermont’s COVID-19 reports for the dates from Sept. 6 until now. 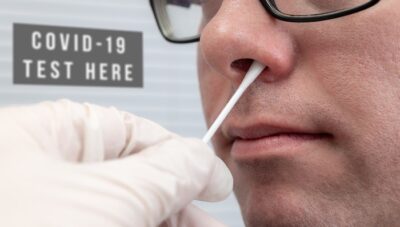 Example of COVID-19 PCR test, which uses a nasal swab to detect the virus from genetic information

Smith also discussed the practice of “contact tracing,” which is when businesses such as restaurants will take the name and number of every customer that comes in, and then the state will collect that information and potentially reach out and ask that Vermonters get the COVID-19 test. If that person refuses, he or she could be presumed to have COVID-19 and potentially face a quarantine scenario.

“Contact tracing is a tool to mitigating and containing the spread of COVID-19,” Smith said. “We have worked hard to ensure that we are prepared to meet the rise of cases across Vermont, and as we see case counts continue to increase across the country and the state we are beginning to add more staff to assist in this effort.”

Smith said he hopes that Vermonters believe in the legitimacy of these tests.

“The most important thing is more testing to be trusted by Vermonters,” he said.

Polymerase chain reaction tests, or PCR tests, seek to confirm the presence of the coronavirus by measuring virus RNA. While the tests may take several days to confirm results, they are considered to be highly accurate.

However, critics of the test say they use questionable methodology. The test’s accuracy has even been called into question by its creator, Kary Mullis.

“With PCR if you do it well you can find almost anything in anybody,” he said. Mullis says the test should not be used to determine if someone has a specific virus.

The NYTimes came to a similar conclusion about the PCR test when it did a study of positive cases across three states and found 90 percent of those cases may not have enough of the virus present to either cause symptoms or spread it to other people.

“Some of the nation’s leading public health experts are raising a new concern in the endless debate over coronavirus testing in the United States: The standard tests are diagnosing huge numbers of people who may be carrying relatively insignificant amounts of the virus,” the report states.

Earlier in the news conference, Smith apologized for an incident involving numerous Vermonters having to get retested for COVID-19 after their initial results did not get to the proper out-of-state destination in a timely manner.

Smith says the COVID-19 testing has changed a lot since the spring when they lacked the capability to meet demands.

“If you remember in the spring we had limited testing supplies and there we were limited in our ability to test Vermonters,” Smith said. “Today the state has a robust testing system.”

Smith said one of their key strategies is to create pop-up testing sites in areas for a day or two at a time where there is a suspected outbreak. Smith said there will also be more permanent testing sites with day, night, and weekend hours, in addition to hospital and pharmacy testing locations. Recently the Vermont National Guard shared with True North that they help in this effort to expand testing capabilities.

He said some of these testing facilities will be using “rapid antigen tests” and that they will soon be offering twice-week PCR testing to those who work at any skilled nursing facility. In the last week, the state has processed over 34,000 tests and 48,000 the prior week. He said their goal is to continue at about a 30,000-tests-per-week pace.

44 thoughts on “Vermonters to be ‘presumed’ COVID-19 positive if they refuse test, could face quarantines”