The July 1 ban on single-use plastic bags will stay in force, says the chair for the House committee that advocated for the bag ban law last year.

“House Natural Resources is not looking to make changes to the July 1 implementation date banning single use plastic bags at the point of sale,” Chair Amy Sheldon, D-Middlebury, said in an email Monday, April 6.

“Reusable bags are, according to our own Department of Health, not of particular concern as a vector for Covid-19,” Sheldon said. In response to an inquiry, the Vermont Department of Health sent her committee this statement: “The short answer is that many surfaces — doorknobs, countertops, handrails — can be a disease vector so long as the virus or bacteria survives on it. Neither single-use nor reusable bags nor cardboard present a particular hazard. The answer for any surface is: be careful, wash your hands, don’t touch your face.” 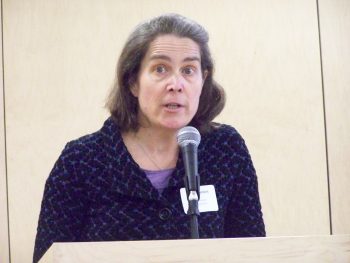 Reusable shopping bags also have been banned during the emergency in New Hampshire, Massachusetts, and San Francisco, according to news reports.

Gov. Phil Scott said at a March 27 press conference he doesn’t have the power to stop the single-use plastic bag ban approved by the Legislature last year. He could delay implementation of the fines, he said, but overturning the ban is up to the Legislature.

A former Vermont legislator, a Republican, questioned Scott’s statement: “What a joke! He can shut down 80% of the economy, but he can’t stop people from a practice that has scientifically been proven to have increased health risk, when we’re in the middle of a public health crisis?”

The lawmaker was referring to a controversial University of Pennsylvania study claiming an association with increased incidence of food-born illness and death. Some Vermont lawmakers dispute the accuracy of the study.

CLARIFICATION:  As printed in yesterday’s Vermont Daily column, Vermont Deptartment of Health Commissioner Mark Levine spoke Monday of mitigation practices reducing by 1,700 the number of potential Vermont coronavirus deaths from a peak of 4,200; he was addressing a question about a Northwestern University computer data model that is considered to be on the high side of fatalities. A more realistic projection of Vermont fatalities is between 44 and 100, possibly up to 200, Levine said. As of 11 a.m. Tuesday Vermont fatalities stood at 23.