MONTPELIER — Marijuana was top priority once again in the Senate chamber Wednesday, and senators wasted no time passing H.511 and sending it on to the governor’s desk for consideration.

With a decisive voice vote, lawmakers approved a bill from the House that decriminalizes possession of up to 1 ounce of marijuana and ownership of two mature and four immature pot plants by residents 21 and older. 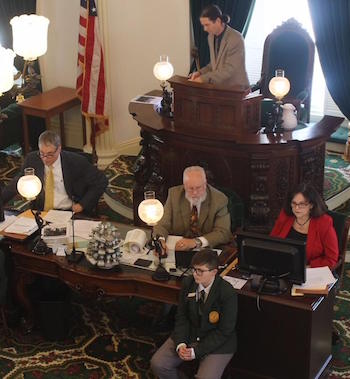 SENATE GONE TO POT: For what could be the last vote on legalizing marijuana in the Vermont Senate, lawmakers passed H.155 Wednesday afternoon by a decisive voice vote.

The quick approval marks a difference in priorities between Democratic and Progressive lawmakers and the governor.

Gov. Phil Scott indicated in recent media interviews that he may sign the measure, although he vetoed a similar bill last year, and Vermont’s top law enforcement groups are warning against it, the Valley News reported Tuesday.

Weeks prior to the 2016 election, the Vermont Police Association endorsed Scott for governor, citing his public-safety-before-legalization approach as the basis for support from police. It’s unclear if the governor would lose the group’s support in the next election cycle if he signs the bill.

The sticking point for Scott last year was public safety — especially highway safety and the protection of children. At the time, Scott said if a new version of the marijuana bill didn’t include adequate safety measures, he would veto it again.

The main challenge for highway patrolmen has been their inability to measure marijuana intoxication among motorists.

Blood tests don’t work because there’s little correlation between the amount of THC in a motorist’s bloodstream and intoxication. Studies show THC can stay in the blood for up to a month after a person gets stoned on the drug.

To combat driving under the influence,Vermont is training drug recognition experts, or DREs, but their methods and viability in court testimony is still a work in progress.

Last year Scott created a marijuana advisory commission made up of health professionals, law enforcement and other experts. The commission’s first report is due to be released Jan. 15.

Senators offered few lengthy remarks during Wednesday’s session, and most of the dialogue came from Sen. John Rodgers, D-Essex-Orleans, who offered a history lesson on marijuana and hemp — though little of it had to do with issues being debated in Vermont.

“I thought it would be great for everyone to have a little bit of the history of cannabis and the 1937 Marihuana Tax Act, which I still think should be challenged and overthrown as it was passed completely on lies and misinformation,” he said.

Rodgers said cannabis and its close relative, hemp, were a staple in colonial and early American life, not only for recreation but as a medicinal herb. Hemp also had uses in paper, fibers and cloth.

“Cannabis hemp is, overall, the strongest, most durable, longest lasting natural soft-fiber on the planet. Its [materials] … depending on the culture, were first, second, or the third most important medicine for two-thirds of the world’s people for over 3,000 years,” he said, quoting history sources.

Rodgers added that the Colonies mandated growth of marijuana plants by all farmers in Jamestown, Virginia, and by 1937 marijuana was used in about 50 percent of all medicines.

“I hope some of you will look through this — there’s a lot of interesting facts in here about the history of cannabis,” he concluded.

Ahead of the vote, Senate President Pro Tem Tim Ashe, D/P-Chittenden, thanked both sides of the debate for sticking it out until this point.

“Even those who didn’t support the final movement for legalization put in a lot of time to ensure that all of the issues [were vetted thoroughly].”