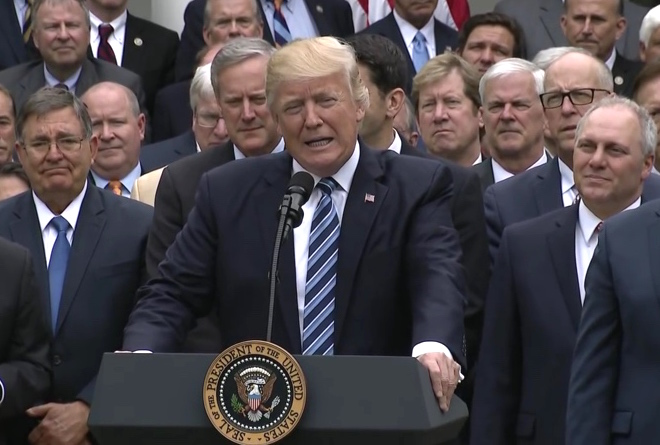 TAXES: President Donald Trump’s tax reform proposal could be one of the biggest overhauls in decades, and for the most part Vermont Republicans support it.

President Donald Trump has released his tax reform plan, and in a rare display of party unity, Vermont Republicans seem to be strongly behind their leader.

“Vermonters continue to struggle with kitchen table issues under the burden of the state and federal tax system. We believe President Trump’s plan will help Vermonters keep more of what they earn,” Jeff Bartley, executive director of the Vermont GOP, said in a statement.

One of the big changes proposed is a simplification of the tax brackets down from seven to three, including rates of 12 percent, 25 percent, and 35 percent.

“An overwhelming majority of Americans believe our tax code needs to be revamped and simplified,” Bartley added. “This important conversation could help all Vermonters and make Vermont a more affordable place to live, work, and raise a family.”

So far 48 percent of Americans support president Trump’s proposal, according to a POLITICO/Morning Consult poll. Bartley said that’s why Vermont’s congressional delegation needs to step up with support.

Trump himself called for bipartisan support for the plan during a recent stop in Indiana.

“Democrats and Republicans in Congress should come together to deliver this giant win for the American people and begin the middle-class miracle once again, also called a miracle for our great companies,” the president stated.

According to the poll, 62 percent favor doubling the standard deduction to $12,000 for individuals and $24,000 for families. Also, 61 percent favor reducing the maximum small-business tax rate to 25 percent from 39.6 percent.

And 61 percent also favor creating a $500 tax credit for all dependents such as grandparents and disabled, and 60 percent support increasing the child tax credit from $1,000 to an unspecified amount.

“The middle class, especially a substantial number of small business owners and operators, are getting clobbered with taxes and regulations,” she said.

She added that a compression of tax brackets sounded like a good thing, with so much complication and loopholes in the current system.

On the subject of taxes, she added it was disappointing that Trump has not yet been able to repeal Obamacare.

“The establishment GOP in Washington are trying to do him in,” she said. “They want to keep the kind of life that they have — keep everything just the way it is. When Trump talks about a swamp, he’s absolutely right.”

“I’m a firm believer that we’ve depended on too much federal money for too long to fund various aspects of our state and government,” he said.

Savage said the extra money in people’s pockets should translate into a spurred economy.

“In theory, with less taxes they should have more disposable income to spend on various things. And they may be buying some consumer goods which would equate to an increase in sales tax revenue. Again, we have to look at all the numbers as they come forward and try to figure this out.”

Savage said he wishes someone would propose a flat tax, not unlike what President Ronald Reagan proposed 35 years ago.

“I’ve always liked the idea of a flat tax,” he said. “A certain percentage of your income goes to the income tax and that percentage is that percentage. You get rid of all of the loopholes and all this other stuff.”

He said everyone needs to keep in mind this is just the beginning of the process.

“By the time it reaches the House where it has to be introduced, and then (moves) over to the Senate, it could be amended umpteen times, and who knows what the final product is going to look like when it gets back to the president. He could either sign it or veto it.”

Already Vermont’s congressional delegation has weighed in. U.S. Sen. Patrick Leahy, a Democrat, took a jab at Trump’s personal income when asked about the plan.

“It’s somewhat suspicious,” Leahy told NPR. “I think we should see his tax return and see whether he is getting a special benefit from this tax plan that he’s proposing.”

Sen. Bernie Sanders, an independent, said the new plan would benefit the rich.

“The Tax Policy Institute has said that … at the end of 10 years, 80 percent of the benefits will go to the top 1 percent,” Sanders told Real Clear Politics. “So, it’s not just that they want to repeal the estate tax, which benefits only the top two-tenths of a percent. Families like the Walton family or the Koch brothers’ family will receive tens and tens of billions of dollars in tax breaks.”