The Vermont Racial Justice Alliance is urging legislators to advance a bill before crossover that would give more power to the new executive director of racial equity in the state.

The Vermont Racial Justice Alliance tweeted an open letter on Wednesday urging lawmakers in the House Government Operations Committee to take up S.120 before crossover on Friday, March 15 — the date when bills not advanced by a committee to move ahead to the other chamber stall out for the year.

The bill aims to increase power of a new position created to deal with alleged systemic racism in government. 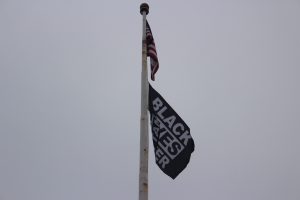 In February 2018, school administrators and students flew a controversial Black Lives Matter flag outside of Montpelier High School to raise awareness about racism in public education.

First, S.120 would change the title of the position from Executive Director of Racial Equity to Commissioner of Racial Equity. The bill’s language also states that this cabinet position person must work to eradicate systemic racism within Vermont’s public education system.

Other duties include setting up special training on racial diversity for government personnel and reporting data back to the Legislature.

The Vermont Racial Justice Alliance wants the committee to move the bill forward because the group believes the position created last year is too weak.

“Clarity around the position’s responsibilities and scope of authority are required to ensure that this position is being set up to succeed in the vital work of systemic racism mitigation,” the letter states. “If there is a serious commitment to the work that we are charging this person to accomplish, we must give serious consideration to ensuring that we set this person up in the best possible way for success.”

Mark Hughes, executive director of the Vermont Racial Justice Alliance, told True North the issue started back in 2017 with Act 54. That act created a special criminal and juvenile racial justice advisory panel, of which Hughes was vice chair. It also created a human rights commission task force to examine employment, economic development, and other areas where racial disparities might occur. Another component was the fair and impartial policing policy, which has been implemented into law enforcement across the state.

Last year, S.281 and other House bills sought to expand Act 54 into the public sector. An early version of S.281 gave investigative or subpoena powers to the cabinet position, but a later version stripped those powers away. Gov. Phil Scott vetoed the bill and instead created an Executive Director of Racial Equity by executive order.

At the time, James Ehlers, a Democratic candidate for governor in 2018, criticized Scott for the move in a commentary.

“Governor Scott vetoed the bill, instead creating a position for the Executive Director of Racial Equity who can be fired at will by the governor instead of the independent Director envisioned by the legislature,” he wrote. “This will make it much harder for the panel to carry out its crucial work to investigate and address racism in our government.”

Then during last year’s special session, Act 9 was signed into law, on June 28, 2018. It was the first mandate to mitigate systemic racism across all state government. It set up the executive director of racial equity position within the executive branch and created a Racial Equity Advisory Panel to implement reforms.

“We’re talking about stopping institutionalized racism in our rules, in our institutions, threaded throughout the fabric of our society. That is what we were really trying to get at with Act 9,” Hughes said.

He described this year’s S.120 as “a cleanup bill” to clarify what this cabinet person can do. He said it’s important that this person has the proper title and power in order to get things done. If a governor is able to dismiss or fire the person easily, the position is too weak, according to Hughes.

“It’s asking power to concede power, so they can start off on a level playing field, so they can get things done,” he said.

The Executive Director of Racial Equity is expected to be chosen this month. After the position is selected, the panel will continue to advise the cabinet person, the governor and the Legislature to prevent racial disparities.