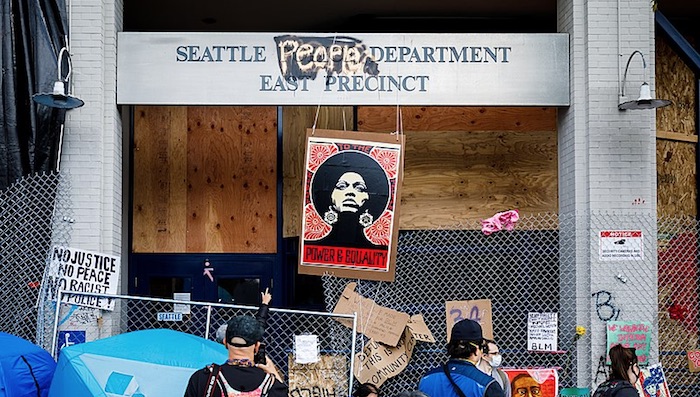 Lawmakers, the National Guard, and protesters are mindful of — and perhaps preparing for — possible conflict in Vermont streets if the Nov. 3 election is disputed. Consider these four recent developments.

This Tuesday In Burlington, activists from the street protests in Seattle taught Vermont protesters to deal with “chemical weapons” and practice self-care in jail.

A recent 350.org newsletter promoted this event: “Keeping Healthy and Safe at Protests — Tues., Sept. 15, 7-9 pm. Learn how to be mentally and physically prepared for being on the streets protesting. We’ll talk about: physical and mental self-care before, during and after an action, jail self-care, what to bring, what to wear, chemical weapons, controlling rumors, and spreading calm. Trainer: 350 Seattle.” 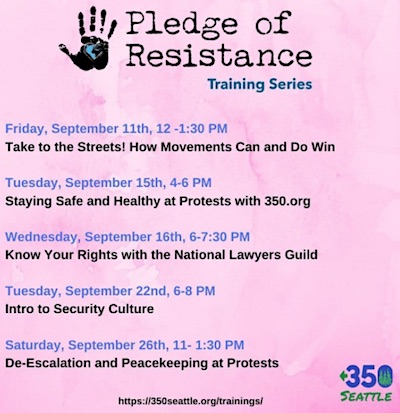 If those Seattle trainers are prepping Vermont protesters to deal with chemical weapons even in only a defensive posture – say, how to reduce exposure to tear gas – clearly they’re training Vermonters to respond in organized confrontations with police. These clinics may also serve as a recruiting tool – because only people willing (and perhaps eager) to encounter tear gas and go to jail are likely to attend.

Seattle, of course, was home to violent protests this summer. 350.org says it promotes only non-violent activism. Still, Seattle .350 Facebook page also praises the recent occupation of the Hyatt hotel and encourages involvement in the Bike Brigades, the purported “cavalry” that block intersections for armies of protesters on foot.

Also on Tuesday, the Vermont National Guard adjutant general told the Legislature how Vermont’s citizen soldiers would respond if called out in response to street riots.

As of Thursday morning, Vermont Daily could not find the link on the legislative website. However VT Digger reports that Gen. Greg Knight told a Zoom meeting of the House & Senate government operations committees that  “We are the resource of last resort. … If we’re called, it is not a protest, it means something vastly different. Our supporting role of civil authority is to preserve life, protect property, and maintain public safety — that’s it. It is always in the background, it is always in support.”

A Guard official reportedly said soldiers probably could not arrest rioters, but would transport them if directed by police.

Typically the National Guard is mobilized at the discretion of a state governor. However, the president can mobilize a state national guard without a governor’s permission — as happened in the South during white supremacist unrest in the late 1950s.

On Sept. 8, the self-described anarchist/Antifa-supporting president of the Vermont AFL-CIO — the state’s second largest labor union — said force would be a “moral imperative” if President Donald Trump improperly declares himself president after a disputed election.

“If we had a situation whereby a political figure, such as the President of the United States, refused to honor the outcome of a democratic election and refused to relinquish power, all bets would be off,” AFL-CIO President David Van Deusen of Cabot said. “Under such a scenario not only would force be justified, it would become a moral imperative.”

The statements above suggest that at least some leaders in two large, well-established activist organizations appear ready to take to the streets if (in their opinion) the election is unfair. And they may not be alone. In addition to the ongoing BLM protests in Burlington, protesters in many rural towns are organizing and holding smaller, less confrontational protests. The Ethan Allen Institute reported Sept. 10 that Vermont has had the highest number of protests per capita since May.

Due to air quality problems, Burlington High School students are staying home through 2020. Almost all public high schools are “remote learning” at least part-time. While there is no direct connection between remote learning and possible electoral civic unrest, it is not unlikely that some students freed from teachers taking attendance will be more likely to join street activity than students expected by both parents and school authorities to be present in school five days per week. It also bears pointing out that groups like .350org target youth as potential activists.

Peaceful protest is a Constitutionally-protected expression of free speech and assembly. If there are actual plans for post-election violence, Vermont Daily is unaware of them. It remains to be seen whether electoral confusion and fear gives birth to unrest which, fullblown, leads to violence. But one thing is clear – protesters and government leaders alike recognize at least the potential for street conflict, and are discussing it publicly.