A Vermont meteorologist is blaming wet and snowy weather on global warming after a recent snowstorm caused thousands of Vermonters to lose power.

Last week, Green Mountain Power crews faced high winds and snow as they ventured out in dangerous travel conditions to restore power to more than 37,000 customers. 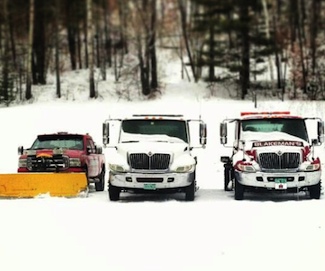 WET SNOW EQUALS GLOBAL WARMING?: A meteorologist working for the power utilities says global warming is the cause for recent snowstorms.

To Roger Hill, a meteorologist and Bernie Sanders fan from Worcester who offers forecasts for utilities across the state, the storms were a sign of something more than weather just being weather.

“As the climate gets warmer the changes in temperatures aloft and at ground level of a few degrees warmer, contribute to storms more like the one we are currently seeing today. They cause infrastructure problems as the snow is heavy and water loaded. This has been modeled to occur more often in our future with a warming climate,” Hill is quoted as saying in a Green Mountain Power press release.

Hill’s comments come not long after the latest International Panel on Climate Change put out yet another report predicting new gloomy scenarios for the climate unless measures such as carbon taxes and green energy quotas are enacted. The report dominated national news, prompting world leaders to declare climate change “the key challenge of our time.”

RELATED: Vermont storms have been a boon to our winter sports industry

In an April 2017 op-ed for the Caledonia Record, Hill expressed the same sentiment.

“Climate change is an existential threat to all,” he wrote. “Eventually, there will be no hiding, no planet B, C, D, no FEMA grants for flooding, food, water, health and ‘quality of life’ and the negative impacts from the weather will force the issue. Pay now or pay later.

“This existential threat will be with you for the rest of your life, and will exponentially increase in the months and years ahead due to poor choices brought on by ‘so-called’ leaders, their moneyed donors and their lies to support inaction.”

Not all climate reports suggest a warming scenario. Weather.com reports that Thanksgiving was one of the coldest on record, and some forecasts predict an upcoming global cooling trend with predictions of reduced sun activity for years to come.

Meteorologist and Northern Vermont University professor Jason Shafer told True North that while he thinks there is a trend of changing weather patterns, it’s difficult to draw conclusions based on any single weather event.

“I think [Hill is] overstating it a little bit. But storms like this that are generally wetter in the cold season around freezing temperatures are more likely as the climate warms,” he said.

“I would say that any one storm you cannot attribute to the climate changing or global warming, but a series of storms being warmer or perhaps more likely to produce wet snow, that could provide more evidence of a climate shift,” he continued.

According to Shafer, wet snow storms are more connected to the overall temperature and not any specific combination of low and high elevation temperature variations.

“Essentially it’s just snow that’s falling at closer to freezing — [that’s] the simple explanation,” he said. “It’s partially melted or may have some water on its edges because of that partial melting because the temperatures are right around freezing.”

Shafer said he’s not into seasonal predictions, but he noted that it has been a cold start this winter in Vermont, and he largely attributes that to an early snow build-up across the northern border in Canada, especially during in October. Snow build-up affects the subsequent weather.

“Snow on the ground over land can create colder temperatures, even months later,” he said. He added that this means probably it will continue to be a cold December. But as for the big picture, this mostly “means nothing for the rest of the winter.”