On October 14, the New York Post published a story with this lead paragraph:

“Hunter Biden introduced his father, then-Vice President Joe Biden, to a top executive at a Ukrainian energy firm less than a year before the elder Biden pressured government officials in Ukraine into firing a prosecutor who was investigating the company, according to emails obtained by the Post.”

If the story is true, then Joe Biden has been lying to the American public by vehemently denying any involvement in any such influence-peddling efforts by his son. In support of its story, the Post printed screenshots of the emails, reportedly recovered from a laptop computer owned by Hunter Biden which had been left at a computer repair store and apparently forgotten. The computer was recovered by the FBI, the Post coverage said. A copy of the hard drive found its way into the hands of presidential advisor Rudy Giuliani, who then took it to the Post.

After the story broke, Facebook and Twitter both blocked attempts to report this story by the Post, today’s paper said. Twitter froze the accounts of President Trump and White House Press Secretary Kayleigh McEnany, according to a White House and media reports. 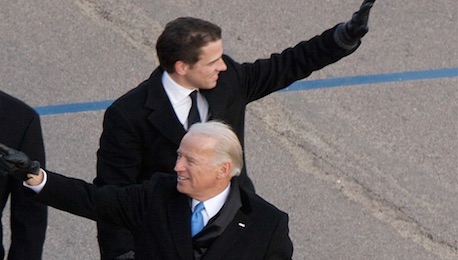 Here in Vermont, the media has been virtually silent on this potentially explosive news story. As of 11 a.m. Thursday, 30 hours after the Post story hit the web, Vermont Daily’s perusal of printed and online news found no “local angle” stories on Hunter Biden’s computer emails nor on the social media suppression. It’s already the second day of the 24-hour news cycle, and we have found no stories soliciting comments from the governor, Democratic elected officials, or the Man On The Street – nothing.

Even headline links to national news stories are lacking. VPR, the Burlington Free Press, WPTZ, the Times-Argus/Rutland Herald, and WCAX, for example, often carry headlines about national news. Yet today none of their highlighted national headlines mention the Hunter Biden computer fiasco, or the social media censorship. However several national headlines trumpet Biden’s fundraising success and his scheduled appearance tonight.

Most Vermont news outlets rely on CNN and/or the national Associated Press for national headlines. CNN seemingly has published nothing. Not so AP, which over the years has earned a deserved reputation for down-the-middle, “just the facts” reporting. However, today’s national AP story on Hunter Biden isn’t about Hunter Biden at all — it’s a hit piece on the Post. It calls the account a “tabloid story” full of “bizarre twists” and “unfounded claims” that “raises more questions than answers.”

It cannot be said that Vermonters who don’t watch Fox News are under a total news blackout about Hunter Biden’s computer. The New York Times enjoys a fairly strong Vermont readership, due to its historical pre-eminence, Vermont’s large population of older transplanted New Yorkers for whom reading the Times is one of life’s essentials, and VT Digger’s offer last year of a NYT online subscription for $20/month (that’s how Vermont Daily signed up for the Times).

Like the AP, today’s New York Times did not ignore this story. On the bottom of Page 17 of Section A, a subhead to the story reads: “Joe Biden’s campaign rejected assertions made in a published report that were based on unverified material from Trump allies. Facebook and Twitter found the story dubious enough to limit access to it on their platform.”

“Assertions.” “Unverified.” “Dubious.” The angle isn’t about possible deceit and corruption by the leading presidential candidate. It’s more of a campaign spokesperson denial, barely even mentioning what (either) Biden supposedly did.

Vermont Public Radio relies on NPR for its national headlines. According to our web search at 11 a.m. Thursday, VPR last ran an NPR story mentioning Hunter Biden in late September.

There has been one Vermont social media mention of the Hunter Biden computer scandal. Twitter handle NewsDoneRight wrote today: “Let’s get this straight. The #Democrats nominated a guy whose guilty of the very things they tried to impeach #Trump about. The ole’ #Ukranian #Corruption boomerang. Throw in the towel @JoeBiden.”

If the buzz about Hunter Biden’s computer has appeared elsewhere in Vermont news media without Vermont Daily’s knowledge, we will happily publish any heretofore undiscovered hyperlinks. But so far, we’ve come up empty. What does that say about Vermont media coverage?