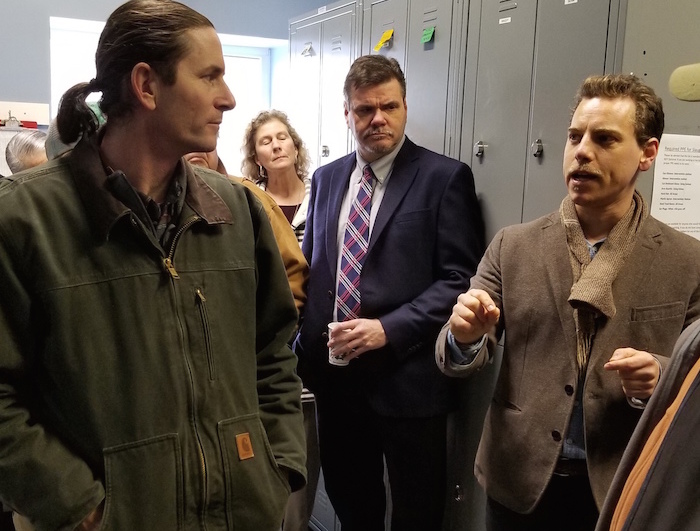 NORTH SPRINGFIELD — While state lawmakers in Montpelier are pushing to make a $15 minimum wage mandatory for all businesses, one small Vermont business is showing that successful companies can offer higher wages without government intervention.

Last week, the Vermont Packinghouse opened its meat processing facility to farmers, community members and state officials to bring awareness to the role it plays in supporting local farmers and Vermont’s agricultural economy.

Guests were given a full tour of the operation and even had the option to peer into the window of the “kill floor” to see how the animals are slaughtered, with a full explanation behind it.

The tour preceded a few short speeches given by Lt. Gov. David Zuckerman, an organic farmer himself, and by one of the original employees of the slaughterhouse.

Arion Thiboumery, general manager of the Vermont Packinghouse, said one of the main goals behind the operation is to ensure the animals are being slaughtered in the most humane way possible.

“When they’re here, we want to handle them in a way that’s humane and make sure they have access to water and space for them to lay down,” he said. “Does that mean it’s absolutely perfect every single time? No, but nobody else is, either.” 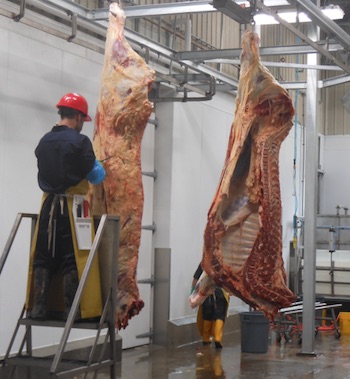 Vermont Packinghouse has a 40,000 square foot facility that can handle single-animal projects or even dozens of animals at a time. The company offers a starting wage of $13 per hour.

Most of the livestock in the country comes from confined animal feeding operations, or CAFOs, Thiboumery said. CAFOs usually consist of small barns with densely packed animals which have no access to the outdoors or other basic needs.

He said Vermont Packinghouse is committed to being a “socially conscious company” as well, which is why it pays employees a starting wage of $13 per hour, nearly $3 more than the state minimum of $10.50 per hour.

“It builds a strong workforce that provides more consistent product continuity, less mistakes and people showing up everyday on time with a good attitude,” Thiboumery said.

The slaughterhouse also offers health benefits and health savings account options. They aim to raise wages to $15 per hour by the year 2020.

When the company originally started in 2014, it employed just 10 people. Now, four years later, there are 60 employees on the payroll and it does business with over 300 small farms.

The Packinghouse is a leading employer in Springfield and is a crucial part of the area economy and local agriculture.

In 2017 alone, it processed 4 million pounds of local meat, contributing about $25 million to the regional economy.

Over the next four years the company expects to invest $1.5 million in the facility and add two more smokehouses to the operation.

Pete Coleman, CEO of Vermont Salumi, a maker of all-natural handmade salami, sausage and prosciutto cotto, works closely with the Vermont Packinghouse. He said the collaboration has been “one of the best alliances” his company has made from the start.

He added that the Packinghouse is the most advanced meat processing facility in the state of Vermont, and described it as a “game changer” for agriculture.

“To have farmers that have access to high quality processing and packing allows them to access more regional and larger markets,” Coleman said. “I think it’s been one of the biggest wins.”